Duel in the Dakotas Round 2 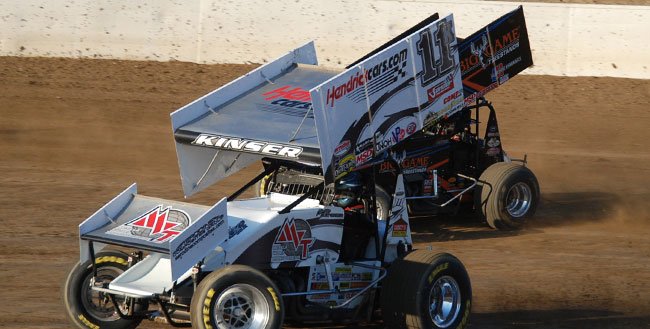 Kinser Looking Forward to Round 2 at River Cities Speedway

The fast track hosts its second Outlaws race of the season on Friday, Aug. 17

The fastest track on the World of Outlaws Sprint Car Series schedule hosts its second event of the season on Friday, Aug. 17, for Round 2 of The Duel at the Dakotas Presented by Gerdau and Sleep Inn & Suites. Kinser charged to his first career win at the high-banked facility, which is officially listed at 4/10 mile, during the Outlaws first race in June.

“It’s definitely a confidence builder,” Kinser said. “We actually had a rough night going until the feature. We’ll take a look at how we were set up there and make little changes and try to get a little bit quicker.”

After starting 10th, Kinser made a late charge to earn his second feature victory of the season. He also joined his father – Steve Kinser – as well as Joey Saldana, Donny Schatz and Craig Dollansky as the only winners at the track known for hosting side-by-side action.

“It’s a real good sized track for the way they have it banked,” said Dollansky, who has a series-best three victories at River Cities Speedway. “Ultimately having a good racing surface is what puts on a good show for the fans, so it’s definitely one of the best tracks in the country for a sprint car race.”

Pit/Combo tickets are available in advance only (includes a reserved seat and a pit pass) by ordering online at SLSpromotions.com or by calling 815-344-2023 between the hours of 8 a.m. and 5 p.m. (Central) Monday thru Friday. Tickets are also available from the track at 218-773-3002.