Race fans lined the grandstand fence, clapping and cheering in unison. Photographers flooded the front stretch, searching for the best angled shot of Gora, grinning wide, with the checkered flag in hand in front of the No. 41 Jason Johnson Racing car. And his parents stood off to the side, grinning just as wide.

It was a moment of joy. A moment of inspiration. A moment to forget about the leukemia diagnosis he’s dealt with his whole life.

Gora has fought leukemia – a type of cancer that affects the blood and bone marrow – for eight years. He’s been in remission for the past two years, his father, Stan Gora said.

Throughout Ayden’s life, race cars have always been one of his biggest passions. Big enough that his father is sure he’ll want to drive one someday. To help make his dream of being part of a race team come true, Make-a-Wish teamed with Jason Johnson Racing to make it happen. JJR invited Ayden and his family to Lincoln Speedway and made him an honorary crew member.

The Gora family, of Duncannon, Pa. knew Lamar Buckwalter, owner of Buckwalter Trucking – a JJR sponsor and Make-a-Wish supporter. Through his partnership with the team, Buckwalter reached out to Johnson about the opportunity to help Gora, and she didn’t hesitate to oblige.

About 10 years ago, the team helped another young boy dealing with lymphoma, making him an honorary crew member. Johnson said that boy has been in remission for three or four years now and still wears the JJR crew shirt they gave him.

“It’s still a big deal to me,” Johnson said. “It holds a special place in my heart.”

She was going to make sure Gora had the same memorable experience.

Not only did Ayden and his family get new JJR crew shirts, they put him to work. 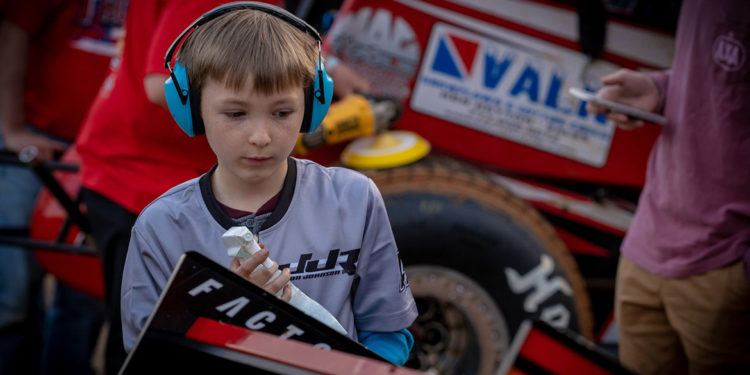 “If he’s going to be a crew guy, he’s got a work a little bit on the car,” Johnson said with a chuckle. “I said (to the crew) teach him (Ayden) some stuff… valuable lessons.”

Johnson pointed to a sign on the inside wall of the team’s trailer with the late Jason Johnson’s rule of everything needs to be professional. The team taught him about the presentation of the car, how to keep it well maintained and how they make it competitive.

JJR driver, David Gravel, helped show Gora how to climb into the car, resulting in an instant smile the second he sunk into seat. The crew also showed him the tools they use to work on the car and how they go about changing a tire – one of Gora’s favorite experiences of the night.

“It’s every kid’s dream to come be a part of a race team, at least it was mine growing up,” said JJR crew chief Philip Dietz. “We enjoy being able to give him the whole tour and whole experience.”

Short on words, Gora’s facial expressions throughout the night spoke the loudest.  A smile rarely left his face.

“This is pretty cool,” Stan Gora said. “Ayden is a little shy, but I think he really loves this. We appreciate everything.”

JJR were able to give Gora and his family an extra level of excitement with Gravel winning his Drydene Heat race, winning the DIRTVision Fast Pass Dash and battled for the win in the Feature. Gravel settled for third, leaving him disappointed in his result, but to Gora it was still a win.

“He’s (Ayden) never been to a race in general, so coming to a Sprint Car race it is probably a lot to take in,” Gravel said. “He’s a shy little guy, but he seemed to enjoy it and gave me a hug at the end of the night, so I think he’s happy.”

With a simple nod and a smile, Gora confirmed his enjoyment of the experience.

Gora still got to stand in Victory Lane, with his own Feature winner tire board, checkered flag and host of photographers capturing 8-year-old Gora’s memorable night that he got to spend with his mom, dad and sister, the JJR crew and several World of Outlaws drivers.

You can catch Jason Johnson Racing and the rest of the World of Outlaws at Williams Grove Speedway on Friday, May 17, and Saturday, May 18.