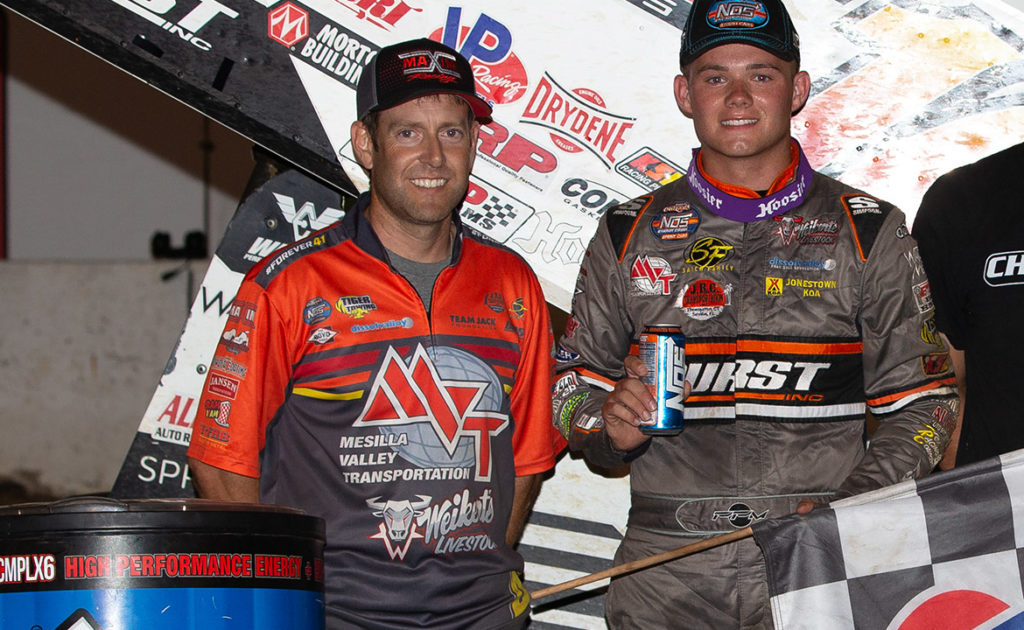 Philip Dietz knew taking on the role of crew chief for two teams this year would be daunting challenge. But also, at times, a rewarding one.

That reward came last week when Dietz made history by winning at 34 Raceway with Parker Price-Miller and his own Dietz Motorsports team and then winning with David Gravel and Jason Johnson Racing the next night at Wilmot Raceway.

He’s the first crew chief to achieve that feat since Karl Kinser won back to back races with Mark Kinser and Steve Kinser throughout his career.

“It feels great,” Dietz said about the accomplishment. “It’s kind of been a struggle the past few months to find a balance that suits both cars. I feel like we’ve hit on something lately. It definitely showed [at 34 Raceway] with Parker. I think we were definitely able to apply some of those things to David’s car. It definitely showed. We’re going to keep working at it. Both crews have been working extremely hard to get these cars better.”

The two-time Knoxville Nationals winning crew chief doubled his work load this year by remaining the crew chief for JJR and also serving as the crew chief for Dietz Motorsports – based out of the JJR shop – which he formed at the beginning of the year with his wife Brooke. His initial plan for his team was to run about 30 to 40 races with Price-Miller as the driver. After the COVID-19 pandemic shook up the season, the team has run every race and Price-Miller said they may even run the entire World of Outlaws schedule.

That’s allowed Price-Miller and Gravel to have a teammate to lean on every race and for Dietz to experiment with setups between the cars.

“I’ve kind of tried the same setup for both cars,” Dietz said. “But you know, each car is a little different. Obviously, the driver likes his car a little bit differently as well. I kind of have to treat them separately. But if we hit on something that seems to make one car better, we can try to apply it to the other. Definitely two different cars. Two different setups. Two different drivers. We seem to be getting closer and closer each race.”

“It shows how hard he works,” Gravel said about Dietz. “It’s been a struggle to set up two cars. We set up two cars and they’re not the same. They just don’t handle the same. He’s got to figure that out and I think we’re starting to figure that out. Hopefully this is more of a normal thing (winning with both teams). I’d like to get a 14 car and 41 car podium one day for sure.”

“I try to keep a notebook with me and try to keep track of everything, or each adjustment as we go through the night,” Dietz said. “It has certainly been a challenge. I feel like my notebook can definitely use some improvement. But, no, it’s good. We have two great crews. They both work extremely hard and make my job a lot easier.”

Chemistry is also key to their success. While Dietz and Gravel built it last year, winning 12 races – including the Knoxville Nationals – Dietz had to do the same with Price-Miller this year. It’s taken time to build that chemistry, Price-Miller said. The more races and more laps they get, the more in tune they become.

Getting back into a rhythm of racing multiple times every week has helped with that.

“It’s always good to get into a routine,” Dietz said. “The more you race the quicker you pick up on areas you can improve. It’s definitely helped to get to race as much as we have lately. I think some of these upcoming races the next few weeks will allow us to work on our cars even more and get them even better.”

The two teams will head to Pennsylvania next week with the World of Outlaws NOS Energy Drink Sprint Car Series to run four races in a five-day for the first PA swing of the year.

First up is the prestigious $25,000-to-win Don Martin Memorial Silver Cup at Lernerville Speedway – which Gravel won last year – on Tues., July 21. Then, the Series will return to Lincoln Speedway for the Gettysburg Clash presented by Drydene on Thurs., July 23 before wrapping up the week at Williams Grove Speedway for the Champion Racing Oils Summer Nationals on Fri., July 24 and Sat., July 25.

Gravel has had success at all three tracks, winning at both Lernerville Speedway and Williams Grove Speedway in 2019 and has a win at Lincoln Speedway in 2017. And while he’s out of the championship points hunt due to missing a race at the beginning of the season, JJR is still in the hunt for an owner’s championship – currently 38 points behind Kasey Kahne Racing and Brad Sweet.

For Price-Miller, he’ll look to continue his strong performances with Dietz Motorsports and produce career best finishes at the Pennsylvania tracks. In two World of Outlaws starts at Lernerville Speedway, his best finish is 20th and in three starts at Williams Grove his best finish is 16th. Thursday’s event at Lincoln Speedway will be his first appearance at the 3/8-mile track.

Dietz will again have his work cut out for him but as always, he’s up for the challenge. No matter how daunting.

For tickets to the Gettysburg Clash presented by Drydene at Lincoln Speedway, click here.

If you can’t make it to the events, you can watch all of them live on DIRTVision.