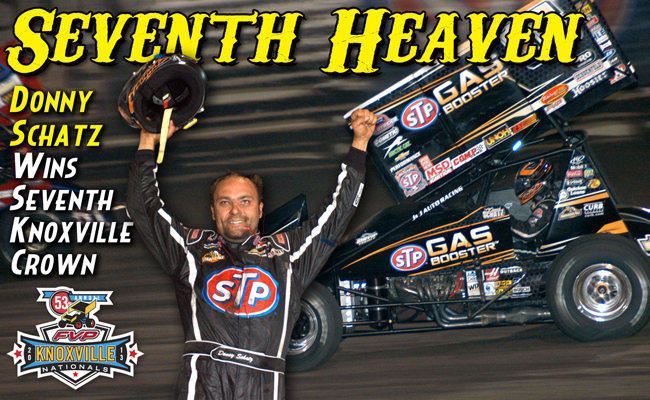 KNOXVILLE, Iowa – Aug. 10, 2013 – Donny Schatz didn’t just win the 53rd running of the storied FVP Knoxville Nationals on Saturday night at Knoxville Raceway, he turned in one of the greatest performances in the history of sprint car racing on the sport’s biggest stage.

After struggling during the Wednesday preliminary feature, Schatz was forced to start Saturday on the outside of the second row in the Last Chance Showdown, or B-main. He won that race to earn the 21st starting position in the $150,000-to-win, 50-lap A-main.

Nobody had ever won the Nationals from deeper than 14th and here was Schatz attempting to win from another area code in his STP Gas Booster J&J. Then, in one of the most dominating runs in World of Outlaws STP Sprint Car Series history, Schatz picked off car after car until finally, with nine laps to go, he caught and passed leader Brian Brown, who finished second to Schatz for the second consecutive year.

“It was a fun run,” said Schatz, of Fargo, N.D., who also turned 36 on Saturday. “We went where we had to, we go to the top, or the bottom, but we couldn’t really make the bottom work. I just can’t say enough for the STP Gas Booster guys. We tried to win the Speed Sport News World Challenge on Friday night, but we also tried something new with the car to see what we could find. We wanted to get locked in. It put a lot of doubt in a lot of minds because I usually run well on the World Challenge night, but when you’re not that good you have nothing to lose testing. I’d rather crash than run 20th or fifth.”

Schatz won the LCS on a last lap pass and followed it up by leading the final nine laps of the feature event on Saturday night after he raced under Brown as they exited turn two.

The victory in the LCS moved Schatz into the 21st starting position in the $150,000 finale, seven positions deeper than when Steve Kinser won in 1995 and when Jerry Richert Jr. won in 1962.

It didn’t make any difference to Schatz. After a dramatic salute to the crowd that featured more than 50 vehicles on track, including support vehicles, and several pyrotechnic booms, it was simply time to race. After the initial green a red flag was quickly displayed for a flip by Stevie Smith in turn one and another quick delay was marked on the second lap as Cody Darrah spun in turn two.

When the field restarted Schatz was 15th and on the move working the bottom. Eight laps later he was running eighth and challenging Knoxville legend, Danny Lasoski, who held the battle for two more laps before Schatz powered past him. Another 8 laps and another position for Schatz, who was then running sixth before a caution brought out by Ian Madsen.

Schatz restarted behind Brown who led the race virtually unchallenged over Joey Saldana who held a strong grip on the second spot.

Five laps later when the red flew at the midpoint of the feature for a fuel stop the top of the order remained the same while Schatz had moved up to the fifth position. The teams changed tires and anything else they thought could help them improve their odds at winning the historic event.

On lap 27 Brown still lead and was pulling a gap over second place Saldana, meanwhile, Schatz began working on Henderson for the third position and two laps later had successfully sieged the position. On lap 31, he had caught Saldana as the charge continued. Meanwhile, upfront Brown enjoyed a lead of over three seconds. Saldana did not have enough to hold off Schatz and dropped to third.

On lap 34, Schatz had virtually erased the three-second lead that Brown had enjoyed and still pressed forward. Brown fought valiantly and for seven laps held onto the lead and fended off the charges. On lap 41, however, he couldn’t hold off Schatz anymore.

A pass from the bottom of turn four took the wind out of the Brown faithful in the packed grandstands as Schatz used the remaining nine laps to cruise to victory. It was the 16th A-main appearance of Schatz’s career. He has now led 177 laps in the FVP Knoxville Nationals, second only to Steve Kinser’s 302 laps led.

Brown and Henderson tightened up with three to go for a great battle for second. The two raced side-by-side for a pair of laps before Brown secured the position entering turn three on the final corner and took the stripe with another painful second place finish.

“We’re disappointed, that’s the biggest thing, but we don’t take a second place at the Knoxville Nationals for granted,” said Brown, the Grain Valley, Mo., native and driver of the FVP/Casey’s General Stores Maxim who collected $75,000 for his effort. “We could finish third, fourth or miss the show. My car went away at the end, our car went tight and then loose and I’m not sure if I used up my tires or what happened. Hats off to Donny Schatz his team they did a great job and he’s a true champion. We’ll keep plugging away and come back next year and either break his legs or beat him.”

Henderson found third position bittersweet with a second so close at hand.

“I’m a little bummed to run third,” said Henderson, of Sioux Falls, S.D., and a three-time feature starter in the nationals. “It’s awesome and it’s an honor, but if you would’ve told me coming in that I would run third coming into this place, I’d have thought that’s sweet. But when it’s right there as a driver, you want to win, especially when it’s $150,000. When it finally sinks in tomorrow when we’re on the drive home I’ll probably be cheering for myself. “

The championship shifts into high gear beginning on Tuesday night at Junction Motor Speedway in McCool Junction, Neb. Because of the unique format, drivers at the Nationals were awarded a flat 75 points in the championship standings, meaning Daryn Pittman continues to lead over Schatz by 71.