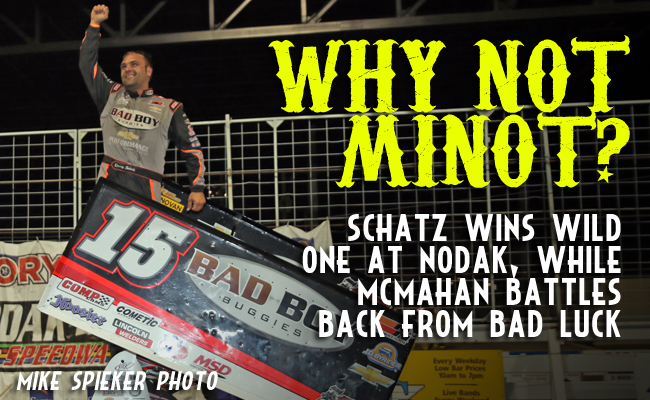 The win in front of a hometown crowd was his 25th World of Outlaws Sprint Car Series victory of the season and fourth straight series win at the track.

“This is incredible. Thanks to all you guys, thanks to my family. This is an awesome place to be,” Schatz said. “Glad to be here, glad to be a part of it and I’m just damn glad to get the win tonight.”

Schatz had a brush with bad luck earlier in the night. While running second in his heat race, he had a tire cut down. Luckily for him, the incident happened on the final lap and he was able to finish in third.

After a second place run in the Dash, Schatz started on the front row of the feature with Paul McMahan. Through the first 10 laps, Schatz maintained a close following distance while McMahan worked his way through traffic. As the battle heated up, the two drivers were at times bumper-to-bumper and side-by-side. Schatz looked for a line around as McMahan tried to hold off the No. 15 Bad Boy Buggies/Chevrolet Performance car.

Lapped traffic proved pivotal for Schatz in the battle though. He and McMahan side-by-side off of turn on lap 12, split a lap car, McMahan to the low side and Schatz to the high side with the better run off the corner. Schatz took over the lead.

For McMahan, the night got much more challenging just two laps later. First he lost his transponder then his tire cut down. His team scrambled to replace the tire under caution and saw their hope for good night fade as McMahan returned from the work area at the tail end in 13th.

“I’ll tell you what, we were pretty good there and I felt it going low while I was out front,” McMahan said. “It was getting tighter and tighter and kind of walling around on the right rear. I was just hoping it would go non-stop but unfortunately it didn’t.”

Schatz led the field to green but had a new handful in Brad Sweet.

“He gave me the death slider going into one and two and I just couldn’t get back by,” Schatz said. “We needed some traffic.”

Through a succession of cautions, Sweet continued to maintain a lead over Schatz. Then disaster struck. Sweet himself had a tire cut down as he paced the field under caution with just three laps to go. Schatz retook the lead and though Daryn Pittman tried to run him down, Schatz parked his car on the front straight.

“This whole race team does a phenomenal job making adjustments,” Schatz said of his Tony Stewart/Curb-Agajanian Racing team. “We’re kind of in a learning spot right now trying some different things. Some nights it’s better, some nights it’s not. Tonight we could have been a little bit better but then the other night we were really good at the end of the race.”

Perhaps the biggest story of the night was McMahan who faced adversity with his CJB Motorsports team and overcame it. McMahan drove his No. 51 CJB Motorsports/Bair’s Tree Service car back through the field, steadily picking up positions on each restart. By the final restart, he battled around the No. 29 of Kerry Madsen for third with just two laps remaining.

It was a long and difficult road to get back on the podium for McMahan.

“We got back out, drove our ass off to get back to third,” McMahan said. “In the results it’s going to look like we backed up two spots but I passed an awful lot of cars tonight.”

For Pittman, the night was perhaps a picture of what could have been for his No. 9 Great Clips/Sage Fruit team as he charged to the lead on one of the mid-race restarts only to have the caution fly before a lap could be completed.

“We took the lead on that restart, had a great restart. I didn’t want to see that caution,” Pittman said. “I wasn’t sure we were going to be able to hold on to it but I had a really good car and I can tell you, just what little bit of clean air I felt, felt a lot better than being behind people.

“It’s a good finish. We would have liked to have won, it would have been great if Brad could have won and we could have run second or third but that’s how it goes. We’ll just keep fighting.”

The World of Outlaws Sprint Car Series heads north of the border for the final time in 2015 as the series takes on the two-day Oil City Cup at Castrol Raceway in Edmonton, Alberta. To find out more information and to learn how to buy tickets, visit http://woosprint.com/oil-city-cup.