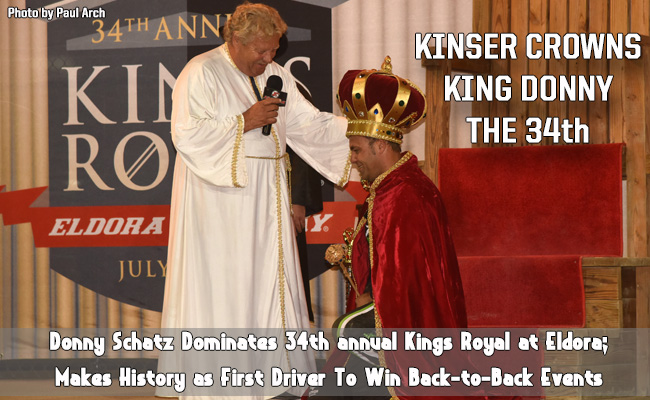 ROSSBURG, OH – July 15, 2017 – Donny Schatz turned in a perfect score card and walked away with a $50,000 check after dominating the 34th annual Kings Royal for the World of Outlaws Craftsman® Sprint Car Series at Eldora Speedway on Saturday night. Schatz set fast time in qualifying and then won his heat from the fifth starting position following the traditional Kings Royal heat race inversion.

Schatz’s win in Heat 1 put him sixth on the starting grid. He wasted no time at all jumping forward. He took the lead from polesitter and Kings Royal rookie Cole Duncan on lap 14 and never looked back. Schatz lead was as big as six seconds and he crossed the finish line 3.966 seconds ahead of teammate Christopher Bell.

“I just tried to play it cautious, but I seemed to be a little better than the guys in front of me while I tried to search out and find the right line,” Schatz explained of his early race strategy. “I got (to the front) fairly quick. “Brad (Sweet), I didn’t know if he would keep getting better, he looked okay. He didn’t really slow down, we just seemed to get a little bit better towards the end of the race as the fuel came off. That comes to the three guys that work on this car. They take it with the utmost pride and passion and it’s those sort of things that get us in these positions.”

Schatz took the lead from Duncan and third-starting Brad Sweet followed him to take the second position. From there, Schatz found his way into traffic and seemingly got faster as worked around the slower cars.

The proficiency of Schatz No.15 in traffic left podium finishers Christopher Bell and Sweet a bit befuddled.

“It just goes back to car handling,” Sweet said. “That really shows your car, how good you are in dirty air. That’s where the No.15 tends to shine. Once he got there, we started getting some bad air and the car wasn’t feeling as good behind some of those lapped guys and that’s when Donny just drove by and that’s when I knew we were in trouble.”

Despite his dominance, Schatz said he never let up or felt he good relax.

“I’ve raced the same way for the last 20 years: the race isn’t over until it’s over,” Schatz said. “You can clearly be the best car some nights and force yourself into a mistake. I probably pushed the issue with a lapped car and I got myself in a spot where I could have been the fence. It’s never over until you roll under that checkered flag.”

Bell put on a show on his own as he raced from the 20th starting spot after he qualified into the race as one of the two-fastest qualifiers who did transfer to the Feature from the heat races. The starting position wasn’t too much of a hindrance to Bell, other than to track down Schatz at the end of the caution-free race.

“That was a ton of fun running up there right around the fence,” Bell said following the race. “For me, I was just trying to run smart and take my time. I knew I had a really good car. Looking back at it, if I had known it was going to go green to checkered, I probably could have made a couple more moves to get through the field faster to give me more time to run down Donny. To come from 20th to second on a green to checkered race is something that I’m pretty proud of.”

The Tony Stewart/Curb Agajanian Racing teammates raced to their second straight 1-2 finish. Sweet was a strong third-place finishers and was on the podium for the third straight night at Eldrora. Still, Sweet feels like his team can find another gear.

“We have a lot of consistency in our car, just some of these races we haven’t hit it exactly right for the main event,” Sweet said. “Donny was just a good bit better. He just drove by us and checked out. I searched around on the racetrack and just never found a spot where it was super good. I think we kind of know where we missed it. There’s a lot of human element in decision-making before these races and you have to make the right decisions if you want to win them. We’ll learn from this and try to keep getting better.”

“I think more than anything, this probably isn’t going to happen a whole lot that I’m going to get to stand next to the real King,” Schatz said of Kinser. “That means a lot to me. He’s always been a hero, he’s been the ambassador of our sport, he’s the best thing our sport’s ever seen. I’m damn proud to stand next to that guy tonight.”

Schatz refused to acknowledge his new accomplishment as the first back-to-back winner of the Kings Royal. Instead, Schatz is happy he becomes a statistical footnote.

“Anytime you can do anything that Steve Kinser hasn’t done is incredible,” Schatz said of his victory.

Earlier in the night, Schatz set quick time with a lap of 13.197 seconds, identical to Kerry Madsen’s quick time in Hot Laps. Schatz then used a late restart in Heat 1 to take the lead and claim the sixth-starting spot in the Feature. Tim Shaffer, Sheldon Haudsenchild, Jac Haudenchild, Brad Sweet and Cole Duncan all won earlier qualifying heats. Clyde Knipp earned the C-Main win while David Gravel made a last lap pass to edge Shane Stewart for a win in the Last Chance Showdown.

Despite Bell passing 18 cars to finish second, Ryan Smith took home the KSE Hard Charger award as he advanced from 24th to 5th behind Duncan, who finished fourth in his first-ever Kings Royal start.

The World of Outlaws Craftsman Sprint Car Series now continues its travel back east with a stop of Lernverville Speedway in Sarver, PA on July 18 for the $20,000-to-win Don Martin Memorial Silver Cup. For additional event information, click here.

For complete results from the Kings Royal at Eldora Speedway, click here.