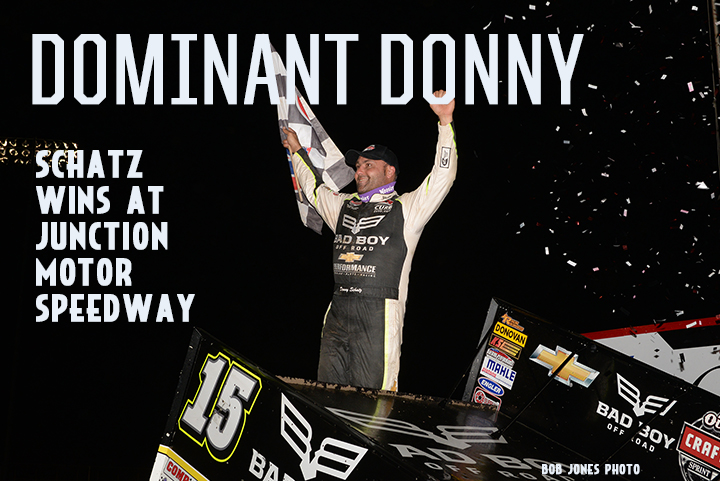 MCCOOL JUNCTION, Neb. — Aug. 16, 2016 — Entering the World of Outlaws Craftsman® Sprint Car Series event at Junction Motor Speedway on Tuesday night, Donny Schatz had never finished off the podium in five career starts at the 3/8-mile. The seven-time and defending series champion extended that streak, while adding to his win total at the track, as he dominated the 30-lap main event.

Schatz started second and took the lead on the top side of the track from pole sitter Joey Saldana. Schatz would go on to lead all 30 laps aboard the Bad Boy Off-Road J&J for Tony Stewart Racing.

“You definitely had to be up front tonight, because the track was so fast,” said Schatz. “When it started moving it went right to the top. When we got to lapped traffic we had trouble getting by guys, but they were fast cars we were trying to get by. The start is always important and you never really try to push the issue.”

The race was slowed by a pair of cautions, both on the second lap. On the first restart, which was a double file restart, Schatz chose the high side of the track and shot out to a lead. Following the second caution, officials elected to go with single file restarts the remainder of the night. On that restart, Schatz again used a strong run to quickly open a gap on David Gravel, who had moved into second, after Joey Saldana suffered a broken rear end while running second.

Late in the race, Schatz caught lapped traffic, and with how fast the track was it took several laps to get around a couple of cars. That allowed Gravel to close as the leader was not able to get around those machines. With six laps remaining, Schatz was able to get around the two cars he had been trying to lap and pulled away.

“My crew did a great job,” he said. “Tony Stewart Racing has such a good group of guys and they keep doing such a great job with the race car. When the race car is like that, they are fun to drive. It helps when you get yourself in a good position on the front row.”

“There is a lot expected out of us, and I expect a lot out of myself as well as my race team at any race track we go to,” noted Schatz. “After 20 years, you’d think you’d be able to figure some stuff out. I think it’s more of that than anything. It’s not a confidence thing. These guys know what they are doing. Some days I may look like I know what I am doing, and some days I actually know what I’m doing. Today we seemed to get everything lined up just right.”

Gravel was able to get side-by-side with Schatz coming off turn-four on lap-23, but was not able to make a pass. Late in the race, Gravel had to fend off several charges by Brad Sweet as the pair battled for the second spot. The runner-up finish for Gravel was his 34th top-five finish of the season.

“I had a shot for one lap and then Donny (Schatz) got by Paul (McMahan) and set sail,” said Gravel. “I think we got a little free at the end and I got the wing back probably too far to roll that fast of a race track. We’re happy with second. We started second in the dash and gained a row there and gained another row in the feature, so I can’t complain with that. I would have liked to have won, but it just wasn’t in the cards tonight, so we’ll move on to Sunday.”

Sweet started third and fell back to fifth early, before making a late-race charge. While the lead duo was negotiating the couple of lapped cars during the last 10 laps, Sweet was able to close in on Gravel, but couldn’t quite get enough of a run to make a pass.

“It was awfully hard to get by the traffic, because there was so much grip there, three-quarters of the way up the track with that cushion,” explained Sweet. “The lapped cars were just fast enough that you couldn’t clear them. I would get a run on David (Gravel), but he covered it up pretty good and he was getting good enough runs off the exit that we weren’t able to get the right run to make the pass.”

The third-place finish for Sweet was his 33rd top-five of the season as he kept pace with Gravel in the point standings. The pair is separated by just three markers.

“You’ll have nights like these and you have to be happy with a podium finish,” Sweet said. “The Ollie’s Bargain Outlet car has been fast and we didn’t get the right draw, but Donny (Schatz) did a great job in traffic clearing those couple guys. It got close for a second. That’s what he does really well and we have to do a little better. We’ll keep working on it and hopefully we can get some wins.”

The World of Outlaws Craftsman Sprint Car Series returns to action on Sunday, August 21 at Angell Park Speedway in Sun Prairie, Wisconsin, along with Bumper to Bumper IRA Sprints.

RACE REPORT: With Joey Saldana on the pole, Donny Schatz took the lead during the first lap of the Junction Motor Speedway Feature and carried it all the way through the 30 laps for his seventeeth win of the season. While David Gravel and Brad Sweet pushed on him, threatening to make it a three-way race to the finish, they trailed behind for their respective podium spots.