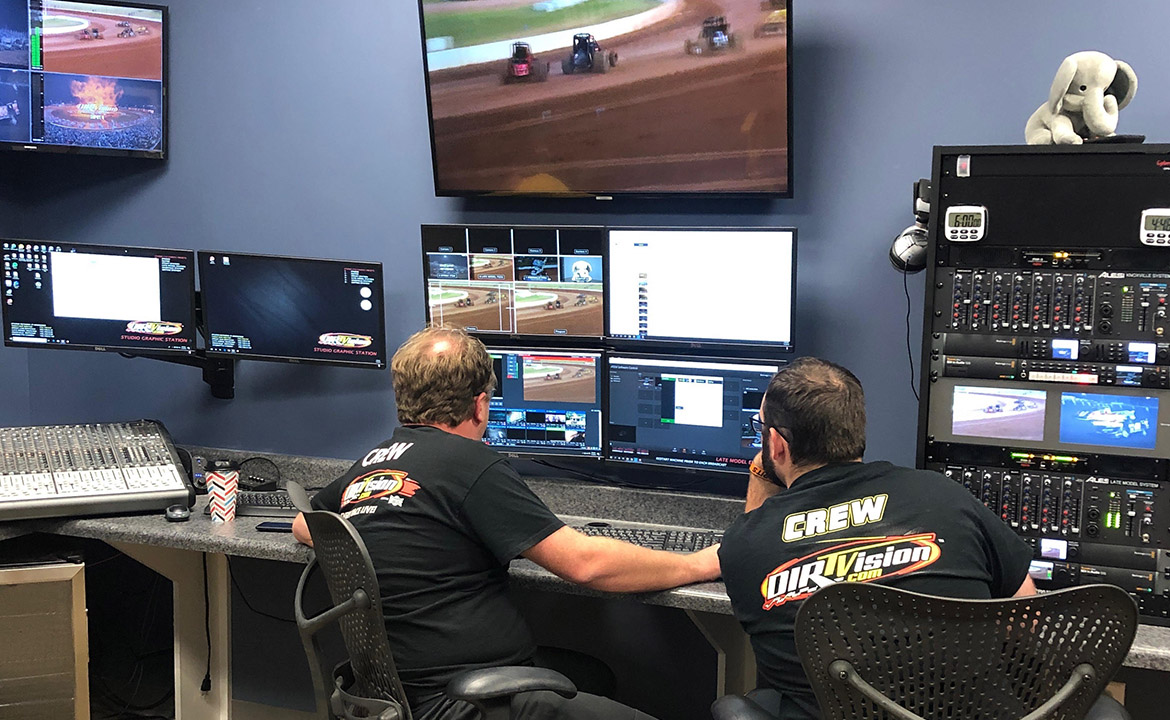 Go behind the scenes of DIRTVision's long early morning Australia broadcast
By Nick Graziano May 14, 2020 at 2:06 pm |

You arrive at the DIRTVision office 30 minutes past midnight – an hour and a half until the first Saturday morning broadcast from Toowoomba Speedway in Australia goes live on DIRTVision.

Lights from inside the office illuminate the dark parking lot. An aroma of coffee from a nearby coffee plant attacks your senses. Every breath tastes like a caffeinated inhale. It’s a welcomed sensation as you prepare yourself for the long morning. 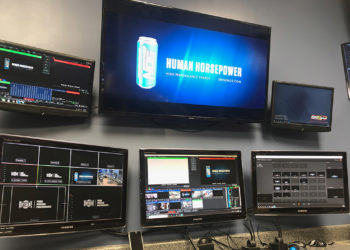 Already roaming the office, preparing the DIRTVision studio for the close to eight hours of Australia racing coverage is Brian Dunlap, Director of Broadcast and Technology for DIRTVision. About three hours of sleep at home and a can of NOS Energy Drink in the studio prepare him for his early morning shift.

Tonight, is a two-show broadcast. Racing from Toowoomba starts at 2 a.m. (ET) and two hours later DIRTVision broadcasts the second Australian event of the morning at Perth Motorplex – 410 Sprint Cars top the bill for both events.

DIRTVision began broadcasting races from Australia in October and broadcasted more than 20 races from the country through May — which will also include races at Valvoline Raceway, Murray Machining & Sheds Murray Bridge Speedway, Hi-Tec Oils Speedway and events like the Ultimate Sprintcar Championship and Ultimate Speedway Challenge.

The decision to add the Australia races stemmed from wanting to bring as much Sprint Car — and dirt racing action — to fans as possible.

“It came from the desire to make it easier for race fans to stay engaged in Sprint Car racing all year long,” Dunlap says. “Obviously, this isn’t the beginning of Sprint Car racing in Australia. But we’ve got fans trained to watch the World of Outlaws on DIRTVision all summer, so, we had fans asking, how do we bridge that gap and give people Sprint Car racing year-round.”

With several connections in Australia already, it didn’t take long to work out deals and begin the international coverage.

To make it work, transmission equipment was sent to the tracks ahead of time to ensure coverage was up to DIRTVision standards and could be streamed through the DIRTVision studio in Concord, N.C.

Dunlap is working the first shift of this two-race broadcast. His plan is to get the coverage of Toowoomba going, monitor it and then stay for the first hour of the Perth event — happening simultaneously with the Toowoomba race — to help Rob Blount, DIRTVision Live Broadcast Specialist, as he begins the second shift.

The studio is like a simple miniature mission control room. Three flat screen televisions line the walls of the small rectangular room, dividing the space into stations. A grid of computer monitors is organized underneath the TVs to control graphics, run commercials and make the broadcasts happen. On the desk wrapping around the room is a small refrigerator-sized device to record the broadcasts and control the sound levels, and an Apple desktop computer, used to edit clips and make the post-race highlight reels. 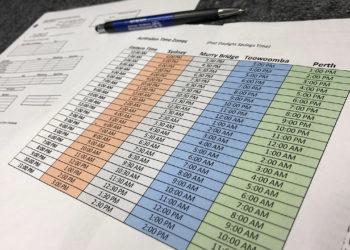 Dunlap is positioned at the center station with a laptop in front of him to monitor tech support — typically quiet during early morning Australia coverages — and a sheet of paper next to it, charting the time zone differences for each track.

He jokes how one night he scared himself, thinking he was about to miss the start time for a broadcast, but then realized there was still an hour before the start of the race.

The action at Toowoomba starts on time. It’s the first broadcast from the speedway this year. The commentators, dressed in pink for a special breast cancer awareness night, waste no time mentioning the event being broadcasted worldwide on DIRTVision.com.

“You can hear the excitement in the drivers during interviews and with the announcers in talking about worldwide coverage,” Dunlap says. “I feel like those guys, obviously, see what we do over here all the time. I think it’s cool that they feel people over here now see what they do.”

If there’s any issues with the broadcast, a quick text message, email or Facebook message to the team in Australia solves the issue in seconds.

The Toowoomba event progresses smoothly, with entertainment on and off the track. With several “modified” classes and the cars from each class having few differences, the announcer’s best way to explain the differences amongst them is “They’re kind of the same, but just something else.”

“I love it. I love it,” bellows out a chuckling Dunlap.

His next two hours are spent rolling his chair back and forth between computers, recording clips of the event on SD cards and monitoring emails and social channels.

At 3:30 a.m. — 30 minutes before the broadcast at Perth Motorplex goes live — Dunlap begins pacing between his station and the one next to him every few seconds. He’s silent, but his fast pace actions say something is wrong. He leaves the studio, phone in hand.

The server that allows DIRTVision to push the Australia coverage live from the office is down. For how long? An unanswerable question. Five minutes. Maybe an hour. It’s a rare occurrence and one that never happens during a broadcast.

After a few minutes on the phone, Dunlap returns. He’s only focused on the task at hand. After another round of pacing back and forth between stations, working on the computers, he returns to his seat. His muscles relax. The tension is gone.

Fortunately, there’s a switch on the transmitter in Australia that can turn the broadcast live. And when the time came, the television at the third station went from a stationary photo of a Sprint Car to the live broadcast from Perth. 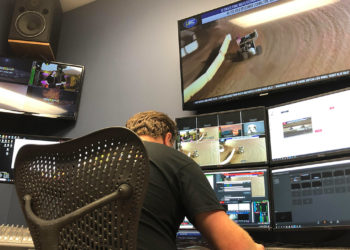 At 4 a.m., with a QuikTrip hot chocolate in hand, Blount enters the studio with the stride of someone who woke up for an early morning flight. He was in bed by 11 p.m. Friday night and then woke up at 3 a.m. Saturday for the morning’s work. He strolls to his seat and debriefs with Dunlap.

With the two broadcasts running smoothly there’s time to relax. Random conversations spark every few minutes to disrupt the silence, ranging from the praise of the new Star Wars Mandalorian show to the exceptional Sprint Car racing produced at Perth Motorplex.

“Aside from the time of day, when you get races like last week, it can be exciting,” Blount says.

By 5 a.m., with a break in the action at Toowoomba, the track begins to play – depending on your preference – either the whimsical or ear piercing “Baby Shark” song.

“And on that note…” says Dunlap as his shift ends and he takes his leave.

The show is now Blount’s. For the next five hours, it’s up to him to record the races, cut clips of each, post them on social channels and make sure everything runs smoothly.

Just before 8 a.m., the Sprint Car Feature at Toowoomab – the track’s final race of the event – goes green. Robbie Farr takes the win, holding off a hard charging Luke Oldfield. Once the race finishes, Blount runs a closer video for the event and then begins the process of getting the entire event uploaded to the DIRTVision vault, making it immediately available for fans to watch.

An hour later the Sprint Car Feature at Perth starts. And it’s another thriller. Jason Kendrick, in the #11 car, has command of the lead, but Callum Williamson, in the #3 car, charges his way through the field to the front. With the race nearing its end, Williamson, throws a slide job on Kendrick to take the lead. However, the next lap he jumps the cushion and flips in Turn Four. The win goes to Kendrick.

A race worth the wait.

There is still a Late Model race to finish the Perth event and once it ends, Blount, again, runs the closing video and posts the race to the vault.

By 10 a.m., the morning of work is over. Racing is done. The sun has set in Australia and risen outside the office. The parking lot is now illuminated by the day, while the lights in the World Racing Group office are off.

Sleep is in the forecast for you and the DIRTVision crew, while others are waking up, ready to consume the morning’s work of action from Australia.

Until the Australia racing season resumes later in the year, the DIRTVision crew will be hard at work in the studio each week broadcasting live World of Outlaws NOS Energy Drink Sprint Car and World of Outlaws Morton Buildings Late Model events to thousands of viewers.

Both series return to racing Memorial Day weekend with the Sprint Cars at Federated Auto Parts Raceway at I-55 and Late Models at Jackson Motorplex on May 22-23, live on DIRTVision.

The DIRTVision Down Under and World of Outlaws coverage can be watched live with a FAST PASS subscription for only $39 a month.

The 2019/2020 @PerthMotorplex Season has wrapped, and boy, what an exciting first season we had broadcasting from the Western Australia coast on https://t.co/6epbL3a3J5 presented by @TeamDrydene!