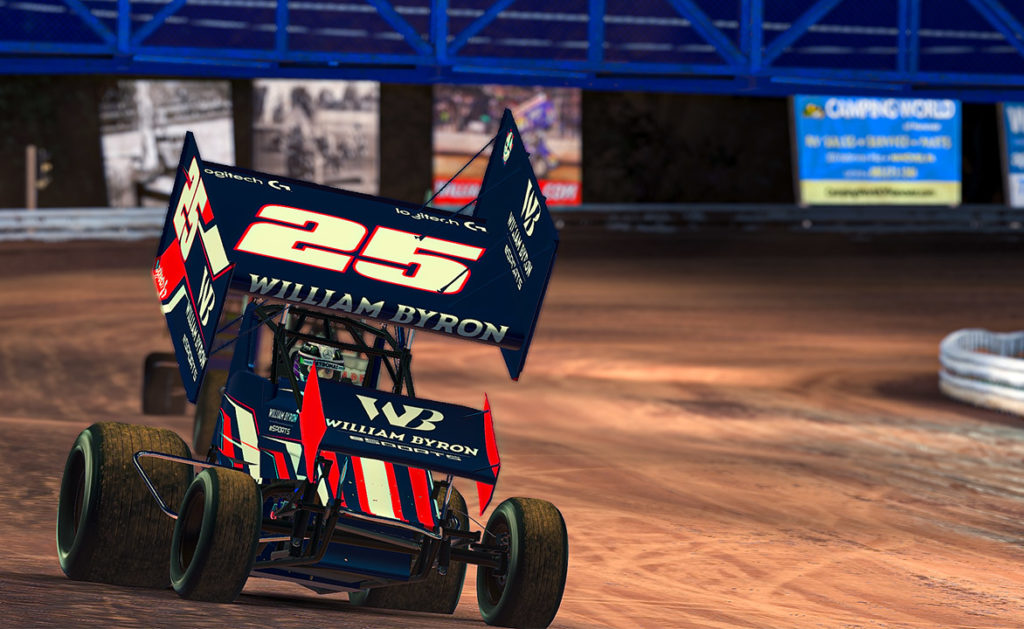 After winning Sunday’s NASCAR iRacing Pro Invitational, William Byron was eager to get back to racing – virtual dirt racing.

The young NASCAR star, who drives the famed #24 for Hendrick Motorsports, made his World of Outlaws NOS Energy Drink Sprint Car iRacing Invitational debut at Lernerville Speedway the week before and became hooked.

Byron’s career progression to NASCAR – which includes a NASCAR Truck Series and Xfinity Series championship – has been well documented of starting with iRacing. The 22-year-old has more than 300 iRacing wins on pavements tracks. He has a handful of virtual dirt wins, too, but not near the years of experience he’s spent on asphalt.

“I did some dirt racing, maybe five or six times when it first came out (on iRacing),” Byron said. “Honestly, I haven’t really done much since then. Getting back into it now is really fun for me.”

Unlike other professional drivers who have also joined the World of Outlaws iRacing Invitational league, such as Ron Capps, Cruz Pedregon and Juan Pablo Montoya, Byron has never driven an actual dirt race car. However, he has run one NASCAR Truck Series race at Eldora Speedway.

Now that he’s stepped behind the wheel of a virtual World of Outlaws Sprint Car, he can’t get enough of it.

“The structure of the race is pretty cool, having qualifying not dictate a whole lot of your race,” he said. “You have qualifying, but then that puts you in your own Heat Race. I really like that because you can overcome your qualifying effort pretty easily if you have a good Heat Race. Or vice versa. You can screw up a good qualifying effort if you have a bad heat race. So, it’s kind of really evens the playing field where the strongest guys come to the front. So, I like that.”

His biggest challenge, so far, has been predicting and figuring out the ever-changing track conditions in dirt racing. While asphalt track conditions can be predictable, dirt tracks tend to change week to week.

“I feel like my line changes every lap,” Byron said. “You can never really do the same thing and expect the same result. It’s hard to practice in this sport, too, because the track is never the same in every race. It’s just tough to wrap your arms around it. There’s no practice for it, you just have to race.”

He’s been putting in the laps in an effort to get better. Byron said he’s done a “heavy amount” of Sprint Car racing on iRacing to prepare for the World of Outlaws iRacing Invitationals. He wants to be competitive. But it’s also a chance for him to just have fun racing.

While there’s pressure on him every Sunday to perform in NASCAR’s Pro Invitational events – which he’s won twice, so far – the Sprint Cars are a chance for him to relax.

“I can just go out there and do my thing and try to overachieve whatever my goal was,” he said. “I like that aspect of it.”

Byron has picked up on Sprint Car racing rather quick, too. He finished 15th in his World of Outlaws debut at Lernerville and then had an impressive charge from 19th to seventh in the latest Feature at the challenging William Grove Speedway – beating previous Invitational winners Kevin Swindell and Christopher Bell.

Being able to race around actual Sprint Car drivers has helped him learn a lot in a short period of time.

“It’s cool to get to know those guys,” Byron said. “I’ve really gained a lot of respect for how good they are. That’s been the fun part for me.”

As he continues to integrate himself in the Sprint Car community more, Byron said he hopes to be able to try a real World of Outlaws Sprint Car at some point. He doesn’t have any connections in that area at the moment, he said, but if he could put something together that doesn’t interfere with his asphalt racing, he could see himself doing something in the off-season next year.

For now, he’s enjoying the challenge of learning a new discipline and becoming a new face in the Sprint Car world.

The next World of Outlaws NOS Energy Drink Sprint Car iRacing Invitational will be Sunday, April 26, at 7 p.m. (ET) on DIRTVision presented by Drydene at the virtual Eldora Speedway.

That was a great time! @WorldofOutlaws race ended up P15 in the A main. Thanks @A_Semmelmann for the help. Heat race battle was really fun below. pic.twitter.com/QfIMfP6zMe