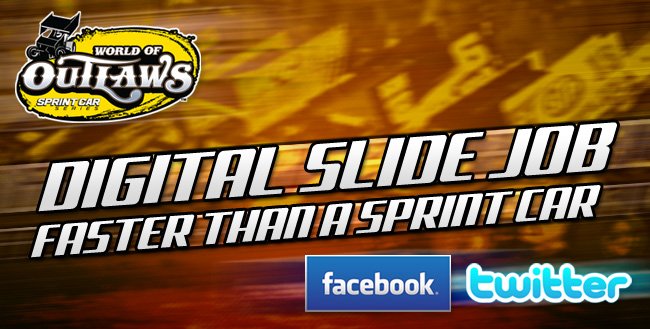 CONCORD, N.C. — Oct. 28, 2011 — In a day and age where information and news moves faster than sprint cars around a quarter-mile bull ring, the World of Outlaws Sprint Car Series drivers, teams and officials use social media to keep fans and media informed about what’s going on at the track. With services that provide real time updates and a wealth of content, an explosion of information is available that didn’t exist five years ago.

“The social networking aspect of this sport has grown quickly,” said Chris Dolack, Vice President of Public Relations for World Racing Group. “We now have the ability, through such platforms as Facebook and Twitter, to reach our fans and media partners on a much more frequent and informal basis. In addition to the quickness of the updates and news, we can also push different forms of media including print articles, podcasts, videos and more. It’s very exciting to see how we’ve adapted these technologies to work in our sport and to reach new fans.”

Perhaps one of the most important features of the social networks for fans and media members alike is the posting of race lineups and finishes along with pictures and videos from the track during the race.

“Having lineups and finishes posted within minutes allows people to keep track of what’s going on at the track even if they aren’t there,” Dolack said. “It also allows us to bring a little fun into PR, especially with on Twitter, where we can connect directly with fans. For example, we had a good time interacting with the Beer Hill Gang at Williams Grove Speedway weeks before we arrived for the Morgan Cup Challenge. It’s tough to accomplish that kind of interaction through traditional PR routes, and it creates some positive energy around an event.”

While the series itself uses the technologies to keep followers from around the world up to date about the events, many drivers and team members have taken to social media to give fans a behind the scenes look at what it’s like to be on the tour.

“It gives me an opportunity to share the reality of what we do in real time,” said Jason Meyers, the defending World of Outlaws Sprint Car Series champion who is leading the series into the Lowes Foods World Finals Presented by Tom’s Snacks, Coca-Cola and Nature’s Own on Thursday at The Dirt Track at Charlotte. “I am still a rookie in regards to my tweets, but I am learning. Social media is the wave of the future, and will only become more prevalent over the next couple of years as everyone from a 4-year-old to grandparents become accustomed to its speed and utility. We are still learning how to best use it in our world of sprint car racing and to also share our world with those that do not know about it.”

As social media and other Web 2.0 technologies evolve, the goals and ambitions for what can be distributed across will grow.

“I’m excited to see what more we can accomplish as the technology changes and gets better,” Dolack said. “We recently launched our own World of Outlaws Facebook page and fans can go there and participate in a contest that will see the winner earn a trip for two to the 41st Annual UNOH DIRTcar Nationals. We’ve also seen tremendous growth with our videos this year and we want to continue that growth. We want to be able to improve the quality of our messages and be able to distribute them to more platforms in the coming years. I think we’ve only begun to scratch the surface.”