DETERMINED TO RACE: Lakeside Speedway overcomes three floods to be ready for the World of Outlaws on Oct. 18 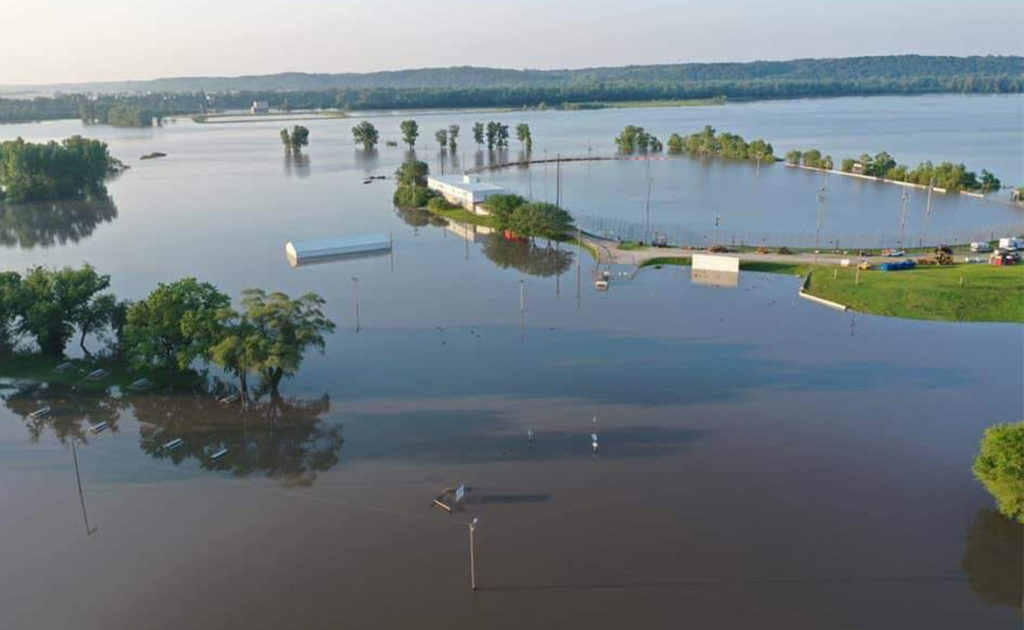 A thunderous roar echoed around Lakeside Speedway. A nightmare on its way.

Pete Howey, general manager of the speedway in Kansas City, Kan., knew it wasn’t a thunderstorm. And knew it wasn’t going to be good. However, he didn’t know the level of destruction this “thunder” was going to bring.

On a perfect day, in a perfect year, in Kansas City, the Missouri River rests at about 18 feet, Howey said. When it gets to about 30 feet, you start to worry. In March, it was projected to reach 35 feet.

The speedway is half a mile away from the river. The only thing separating the two: farm fields.

When the warning came through that the river was reaching 31 feet, Howey and others went to the track to remove everything from the pit area and all valuables out of the facility’s barn. Howey said he could see a lot of water running across the field. And then he heard the noise. The thunderous roar. The levy broke.

“Honestly, it was like going white water rafting. That sound that the water makes,” Howey said. “We were up at the main building and just looked and all of the sudden it just came rushing across the pits and beelined for the track. Within three hours of that noise of that water, about fifty acres of the property was under. And then you saw it rising.”

“All you can do is watch it happen,” Howey said. “Think about what we’re going to do to get it back and go and execute it. Just watching it happen was horrific. Watching the water rush in was crazy. All you can do is take a big sigh and get working.”

The damage was minimal in some of the buildings, only needing new electrical. With the early warning, Howey said he was able to get out everything of value before the flood came in. The pit concessions building, which houses, a kitchen and bathroom took the most damage.

Howey and his crew had to put in new walls, new plumping and redid the electrical on the building. However, by the time they did – eight days away from starting the racing season – a second flood hit the area on Memorial Day. The pit concessions building was then a complete loss – about a $30,000 loss.

Three weeks into that work a third flood hit the track.

The floods were less severe each time, running less water through the area, but Howey said the third flood was the worst because it brought so much debris with it. In total the damage from the three floods reached into the six figures range, Howey said.

At that point many had been telling Howey his season is done. He won’t see any racing at the track. He wasn’t going to listen, though. Howey wanted to see racing on his facility, one way or the other.

“I just had that determination,” he said. “I said, ‘We’re going to at least get one race here if I have to have a boat race. We’re going to have something here.’”

About two months of hard work and perseverance later, the track held its first race in August and on Friday, Oct. 18, will be ready to welcome back the World of Outlaws NOS Energy Drink Sprint Car Series for the FVP Platinum Battery Showdown.

“We’re thrilled Lakeside Speedway was able to survive the flooding and still be able to host the October World of Outlaws event,” said Carlton Reimers, series director for the World of Outlaws NOS Energy Drink Sprint Car Series. “It’s a facility we always enjoy going to and look forward to racing at.”

It’s a show sure to delight fans with Oklahoma driver Daryn Pittman looking for back-to-back wins at the speedway, and 10-time Series champion Donny Schatz and 2019 Kings Royal winner Brad Sweet in a tight battle for the championship.

“I love that show,” Howey said. “It’s one of the best shows we have during the course of the year. Obviously, I like it because the place is packed. I just think the Outlaws put on a great show.”

Tickets for the FVP Platinum Battery Showdown are now on sale and can be purchased online at slspromottions.ticketforce.com or by calling SLS Promotions at 815-344-2023.

Kasey Kahne, who retired from NASCAR competition, following the 2018 season, will also be a special guest at the event and will be signing autographs for fans at 3:30 p.m. on race day.

A thunderous roar will echo once again around Lakeside Speedway. This time a pleasure to all, created by The Greatest Show on Dirt.