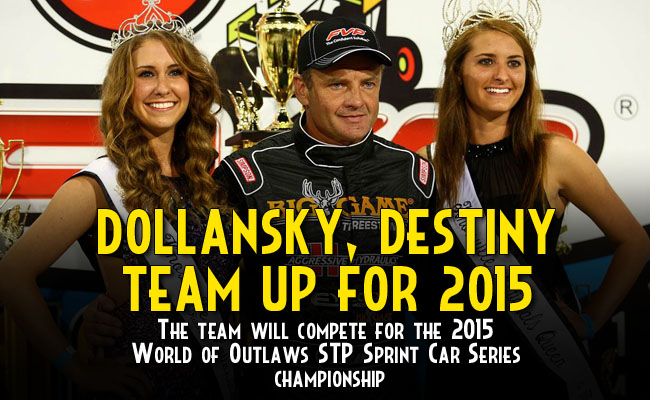 Destiny Motorsports and Craig Dollansky Team-Up with No. 7

PETERSEN MEDIA: Though there are still a few weekends of racing left in 2014, Destiny Motorsports already has the wheels in motion for the 2015 season, and it is with great pleasure that the team can announce that they will chase the 2015 World Of Outlaws STP Sprint Cars Series Championship, with Elk River, MN driver, Craig Dollansky taking over the driving duties, as he returns to the series.

“I am excited to join Destiny Motorsports,” Dollansky commented. “Rick and Barb Rogers have a lot of passion for their race team, and are committed to building a championship caliber team. I am also very excited that we will utilize the No. 7 on the car, and Aggressive Hydraulics, a long time supporter of mine since 2008, will be joining us.”

After taking a year off from touring the country with ‘The Greatest Show on Dirt’, Dollansky teams up with Destiny Motorsports refreshed, and rejuvenated, to go after the series championship that has eluded him over the course of his career.

Running full time with the tour from 2001-2013, Dollansky sits 10th all time on the series wins list, with 59 wins, and has faired well in the standings over the years including a career best second place effort during the 2012 season.

Among his 59 career wins, Dollansky has won the Iron Man 55 on three consecutive occasions, and the 2012 Silver Cup highlighting a few of the series’ bigger events. He has victories at many of the legendary tracks on the tour including Williams Grove, Eldora, Knoxville, Silver Dollar, Volusia, on top of numerous triumphs at other tour stops.

“We are very excited to expand our schedule and run full time with the World of Outlaws in 2015,” Destiny Motorsports Owner, Rick Rogers said. “We are equally as excited to welcome Craig Dollansky to our team, as he makes his return to the series after running a scaled back schedule in 2014.”

Running primarily at the Knoxville Raceway in 2014, Dollansky has still remained very strong as he has picked up five wins while competing in 35 events, including a fourth place finish during the Knoxville Nationals.

“This season we raced a very limited schedule, which was very different from the World of Outlaws tour,” Dollansky added. “It was an adjustment for me. I enjoyed being able to race with my son Garrett, but I am looking forward to getting back on the tour and contending for a championship. We have some work to do to prepare the team, and will be considered underdogs, but I am okay with that. The Destiny Motorsports team, and I are committed to building this team into a title contender, and I look forward to the challenge.”

Dollansky is also eager about the opportunity to team up with long time sprint car mechanic, and Destiny Motorsports crew-chief, Scott Benic.

“Scott and I have raced together in the past, and I’m looking forward to the opportunity to have him as my crew chief full-time. We have had some success together in the past when he helped out on a part-time basis,” Dollansky also remarked. “I enjoyed racing with him, and we communicated well. There’s a lot more we would both like to accomplish in sprint car racing, and I feel good about our potential together. One of the things I like about Scott is, he has as much desire, drive and determination to win as I do. We know we will have to prove ourselves every night we hit the track. Rick and Barb are committed to provide what we need to go out and win, we will do all we can to make that happen!”

As it currently sits, Dollansky will make his debut aboard the Destiny Motorsports entry at the upcoming World Finals, and the team is also scheduled to compete during the Winter Challenge at the Cocopah Speedway in Arizona in January, before meeting up with the World of Outlaws in Florida in February.

Before Dollansky does take the reigns, Destiny Motorsports will finish up their 2014 All Star Campaign with Derek Hagar doing the driving this Friday and Saturday night.

STAY CONNECTED: Stay updated with Destiny Motorsports by connecting via social media, www.facebook.com/destinymotorsports, and on Twitter, @DestinyMS9. You can also check us out on the web at www.destinymotorsportsinc.com. To stay up to speed with Craig Dollansky you can follow him on Twitter @DollanskyRacing or visit his website at www.dollasnkyracing.com.