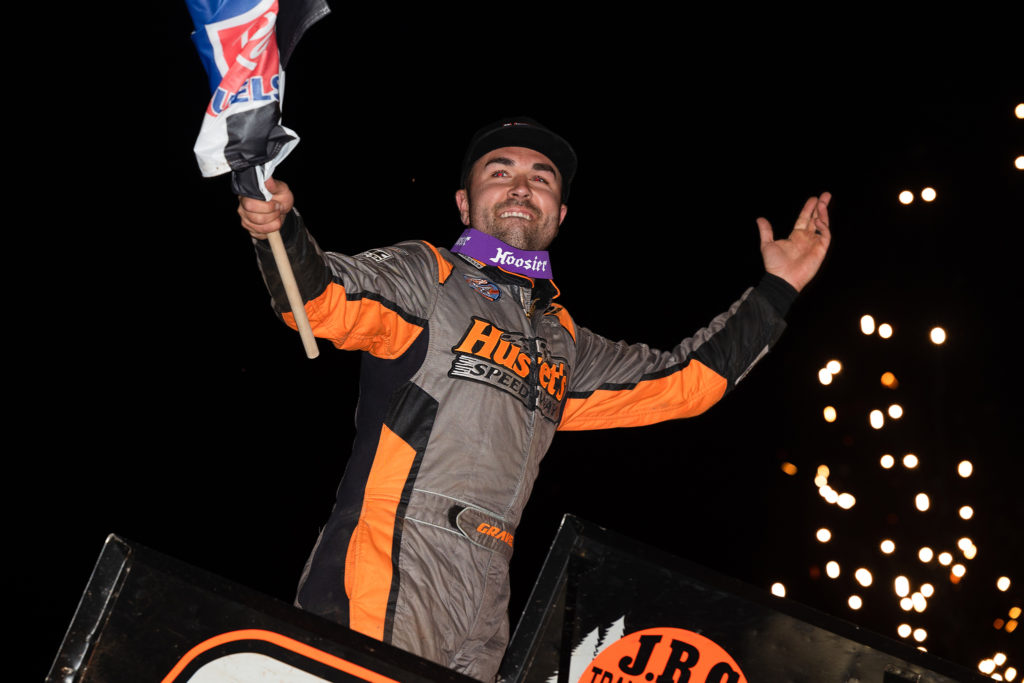 Gravel Cuts Deficit to -120 Behind Sweet with Nine Races Remaining

Not one, but two different doors opened this weekend for David Gravel, and he made sure to kick both wide open.

After Brad Sweet’s struggles in 19th at Eldora, the Watertown, CT native came back the next night and took fate into his own hands by stealing the victory from Sweet himself. The end result continues to cut down the championship deficit with only nine races left for the World of Outlaws NOS Energy Drink Sprint Car Series.

On Saturday, Gravel’s opportunistic actions came in the form of a daring final restart as he threaded the needle and squeezed by Sweet to slide him into turn three on Lap 23 of 35. The Big Game Motorsports #2 gasser ran off into lap traffic over the closing laps and beat Sweet to the line by 1.478-seconds.

The win extends Gravel’s success at Lernerville Speedway, where he’s won five times with three Commonwealth Clash titles to his name. It’s his 68th World of Outlaws win and marks the third time in his career that he’s recorded a 10-win season.

Most importantly for the 29-year-old, it’s momentum and lots of it with one of his best tracks and biggest races coming up, the $75,000/Win National Open at Williams Grove Speedway next weekend.

“I really wanted to hit 10 wins,” Gravel said. “We’ve got a lot of good tracks coming up, so hopefully we can keep it rolling and see how big we can get that number.”

“Once I had enough position to send it in on Brad, I figured that was the race,” he continued. “I knew I had to get my elbows up with 11 laps left, but none of the lappers were on top and I could run it extremely hard.”

For the second straight night, Oklahoma City’s Wayne Johnson put the Two-C Racing #2C on the front row of the NOS Energy Drink Feature. Still in pursuit of his first-career World of Outlaws win, Johnson outdrove Gravel on the opening lap and proceeded to control the first 12 circuits of the 35-lapper.

When Sweet went storming by Gravel for second on Lap 12, he wasted no time flying by Johnson to put the KKR #49 in the lead on Lap 13. He controlled the following 10 laps before the final restart allowed Gravel’s #2 to lineup alongside him.

Electing the low line on the double-file restart is what Sweet credited as his ultimate downfall on Saturday, as Gravel rocketed around the top and built his momentum. The door opened down the backstretch and Gravel wasn’t letting it close.

He squeezed by Sweet into turn three and slid high to protect the spot as he came to the flagstand on Lap 23 as the new leader. From there, lap traffic gave Sweet some hope, but there was little he could do in stopping Gravel’s pace around the outside of the Sarver circle.

After controlling laps 13-22, championship leader Brad Sweet slipped back to finish in the runner-up spot on Saturday night. With nine races remaining this year, his Kasey Kahne Racing, NAPA Auto Parts #49 holds a +120 point advantage over Gravel with the title on the line.

“I made a mistake,” Sweet admitted post-race. “I should’ve chosen the top on that restart. I was trying to get there to block him, but he was already there. We had a car capable of winning, I just didn’t get it done. We’ll go to Williams Grove and see what we can do.”

Donny Schatz closed out the podium with a third-place finish aboard the Carquest, Ford Performance #15. The Tony Stewart/Curb-Agajanian Racing #15 driver now heads for Williams Grove’s $75,000/Win National Open as the defending champion next weekend.

“That’s about as fast as I can ever remember going around this place,” Schatz said on the 4/10-mile surface. “We were decent on the bottom, but then it just got so quick around the top. We keep improving little by little, though.”

James McFadden claimed his 17th consecutive top-10 finish with a fourth-place score aboard the Kasey Kahne Racing #9. Sheldon Haudenschild returned to the top-five with a fifth-place run in the NOS Energy Drink, Stenhouse Jr. Marshall Racing #17.

UP NEXT: The World of Outlaws NOS Energy Drink Sprint Car Series remains in the state of Pennsylvania next week as the final Crown Jewel of the season takes place. On Friday & Saturday, October 1-2, Williams Grove Speedway hosts the $75,000/Win National Open. If you can’t be there, watch Every Lap LIVE on DIRTVision.