David Gravel Wins a Wild One at Tri-State 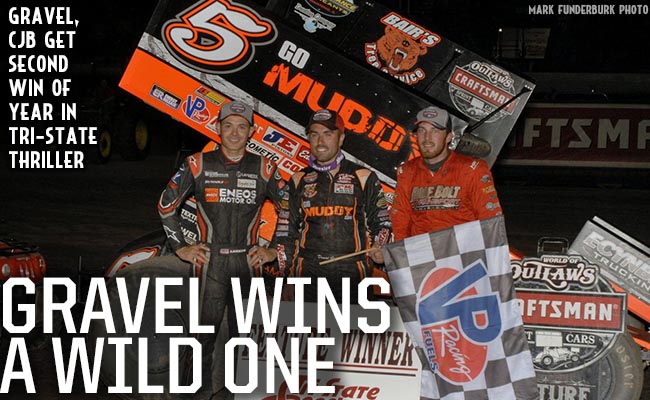 David Gravel Wins a Wild One at Tri-State

HAUBSTADT, IN – May 13, 2018 – David Gravel was one of four different leaders in a crazy Feature at Tri-State Speedway and inherited the lead while running third when the leaders crashed on a restart. It was Gravel’s second World of Outlaws Craftsman Sprint Car Series win of the 2018 season. Hunter Schuerenburg scored a career-best second place finish with Kyle Larson completing the podium.

David Gravel said it best, “It’s a 40-lap race at Haubstadt, anything can happen.”

Anything can happen and just about everything did happen. Gravel’s night started off with a bang, literally, as he made heavy contact with the wall on his first lap in Qualifying, nearly sending the CJB Motorsports No.5 for a ride. Gravel never came to a complete stop, recollected his machine and smartly took his car backwards around the track to make sure he had momentum for his second Qualifying lap. The veteran move paid off as Gravel laid the fifth fastest lap in Flight B, positioning himself nicely for his Heat Race.

Thomas, a non-wing Sprint Car ace, used the cushion to lead the opening lap. Gravel would pull a slide job in turn one and two and led the field down the backstretch of the second lap. Just as the yellow flew for Aaron Reutzel, heartbreak struck for Thomas. The studs on the hub sheared off, causing the right front tire to come completely dislodged from the Dooling Hayward Motorsports No.63 machine, ending the current USAC Points Leader’s night in unfortunate fashion.

Gravel controlled the restart, but Indiana native Justin Peck showcased his speed as he powered around the CJB Motorsports No.5 to lead Lap 4. Peck set a blistering pace out front and put some distance between him and the rest of the field once he took command.

Sheldon Haudenschild would throw his name in the mix, taking third on Lap 13 and began quickly closing in on Gravel and Peck as they navigated lapped traffic. Haudenschild and Gravel thrilled the capacity crowd, exchanging slide jobs back and forth for multiple laps as they battled for the runner-up spot in exciting fashion. Sheldon just barely edged Gravel at the line before the caution flew on Lap 23 for Kerry Madsen.

Peck chose the top for the double-file restart, but an excellent restart for Haudenschild saw him grab the lead convincingly. A Lap 30 caution for Ian Madsen set up the restart everyone is talking about.

Haudenschild elected to the bottom with Peck to his outside. Peck tried a massive slide job on Haudenschild in turn one and two for the lead, but it ended with the duo making heavy contact, creating a logjam in front of the rest of the field.

After the race, the two drivers had a different perspective on the incident. Sheldon, obviously disappointed, thought that the incident was pretty cut and dry, while Peck called it hard racing.

“I thought I had a run on the restart, we were both racing hard. I hope there are no hard feelings going forward. It’s definitely a confidence booster to have this much speed, but we have to finish races,” Peck said after the race. Peck, Haudenschild and Brady Bacon, who was running sixth, all had too much damage to continue.

After the carnage was cleared, David Gravel assumed the race lead with 10 laps remaining, with Hunter Schuerenburg and Kyle Larson in tow. Gravel was strong, but Schuerenburg stayed right with him in search of his first career Outlaw win. Gravel made a bold move with two laps remaining, splitting two lapped cars, but once again Schuerenburg kept pace. Schuerenburg got a massive run down the backstretch on the final lap to make it a thrilling finish to the line as Gravel barely edged the No.20N by 0.101 seconds for the victory. The win was CJB Motorsports fourth win in their last five starts at Tri-State, dating back to when Paul McMahan drove for the Pennsylvania-based team.

“I tried to race a smart race, the lapped cars got tricky. I saw Hunter poke his nose there at the end, what a great run for him, I’ve known him for a long time and they’ve been good this year,” David Gravel said in Victory Lane.

“With me in the middle, I knew it would be tough to go around me and I was still able to see who was on the bottom.” “I’m happy to get another win, it’s been an up and down year so far, happy to get a win on Natalie’s [Jackson] birthday and on Mother’s Day,” Gravel added.

Hunter Schuerenburg was pleased with his career-best second place effort, “We’re slowly getting there, I’m not going to say we are there yet, these guys [we are racing against] are really good. Overall it was a great effort for my team, this deal is a lot of fun. We’ll just keep on rolling and see if we can get one here soon.”

Kyle Larson finished third, but never truly threatened the race leaders. “My car got better and better throughout the race. I had a lot of fun tonight, it was cool to be on the podium after not being in a Sprint Car in a while,” Larson stated.

The World of Outlaws Craftsman Sprint Car Series continues its 40th Anniversary Season and heads to Central Pennsylvania for a trio of dates with the Pennsylvania Posse starting on Wednesday, May 16 at the Lincoln Speedway before heading to Williams Grove Speedway on Friday and Saturday May 17 and 18 with the running of the Morgan Cup. If you can’t make it to the track, be sure to watch all the action live on DIRTVision.com.

Abbreviated Results from Tri-State Speedway, May 13, 2018: