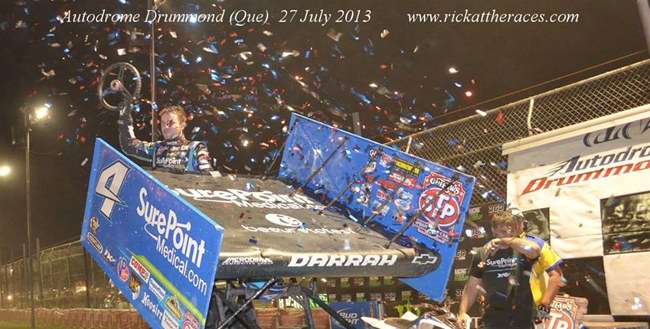 DRUMMONDVILLE, Quebec – July 27, 2013 – Cody Darrah jumped out to an early lead and held off Donny Schatz throughout the 35-lap feature to earn his second World of Outlaws STP Sprint Car Series victory of the season on Saturday night at Autodrome Drummond near Montreal.

Darrah led the first two laps, but on a lap-three double-file restart Darrah chose the bottom and pole-sitter Jason Sides drove around the outside to take the top spot before Darrah recovered and drove back in front.

While Darrah was trying to build his lead in the SurePointMedical.com car, Sides and Donny Schatz raced back-and-forth for second. Schatz moved ahead on lap 10 before Sides raced right back on lap 11 as championship leader Daryn Pittman closed in on the action.

Two laps later the race took a dramatic change when Sides had a left rear tire go down on lap 13 as he entered turn one while running second in the Wetherington Tractor Service car. With a tire down, Sides was unable to hold his line in turn one and impacted Pittman’s car, which launched over the berm and through a rough field and sustained among other things a broken front axle. Pittman’s Kasey Kahne Racing Great Clips crew quickly made makeshift repairs to keep him on track, but he was out of the battle for the win.

Now with Sides and Pittman relegated to the back of the field on the restart, Darrah restarted alongside Schatz, who has been the series’ hottest driver in July. Darrah learned from his previous restart that the inside of the track was no longer the place to be and chose accordingly. From that point forward Darrah ruled the field.

With just one more restart on lap 16, Darrah again chose the outside lane and turned a solid final 14 laps to win the first Canadian race of the season.

“The top was wide open and it was good that we got to the lead, and I messed up going to the bottom for a restart, thinking that I could cut some time but it just did not give me enough speed going into one and two,” said Darrah, of Red Lion, Pa. “It was good it was 35 laps, we actually had a tire going down and I think we hurt our motor about 10 laps in. When we get these wins we really appreciate them. I was glad to get the first restart, where I chose the bottom, and not have to restart against Schatz. If I had made the same mistake against him, well he capitalizes on those opportunities.”

Schatz ultimately picked up one spot in the feature and earned a solid runner-up finish in his Tony Stewart Racing STP/Armor All J&J. It was a welcome finish for Schatz, who crashed violently in the same race last year before a triumphant charge down the final stretch of the season to win the championship.

“Last year’s finish was terrible, we had a pretty nasty crash and I’m happy to have walked away from it,” said Schatz, of Fargo, N.D., who established a track record in qualifying. “This year was a different story, we had a great lap in qualifying with the engine running good the car rotating really well. But Cody was awfully fast up top, just wide open, and I tried to make the bottom work, but some nights you just run second.”

Kraig Kinser put his Steve Kinser Racing Maxim on the podium for his best finish since July 5 at Dodge City, sparking a string of congratulations from other drivers and teams.

“Definitely a third in these three races here is a great way to start,” said Kinser, of Bloomington, Ind. “Hopefully we can improve a little bit, but all said and done after the month we’ve had this is a big positive and now we want to build on it. Any momentum you get built going into Knoxville is always a plus.”

Australian Kerry Madsen missed the top three by one spot to add to the international flavor of the event while 11th-starting Joey Saldana earned the KSE Hard Charger award to round out the top five.

The lead for the championship is now separated by just 87 points. Pittman still leads with 6,824 points while Schatz now owns 6,737 points.

NOTES – Donny Schatz was the fastest qualifier around the 4/10-mile oval with a time of 12.934 seconds to earn five championship points. Also earning points were Paul McMahan (4 points), Cody Darrah (3), Kerry Madsen (2) and Joey Saldana (1). … Sammy Swindell, Kraig Kinser, and Steve Kinser won heat races. … The dash draw was a 6 for the 29th time this year. … Jason Sides won the dash for the second time this year.