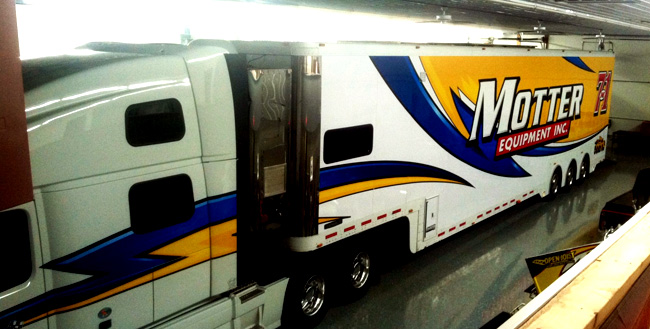 “We are thrilled to return to this series with Joey Saldana as our driver,” said Motter, president of Motter Equipment Inc.  “We are building a new team with all new equipment, but with very experienced players. Joey’s resume speaks for itself.  He is a proven winner on and off the track.

“He has a great personality that makes him a fan favorite and he is a great spokesman for any corporate sponsor.  He also has a very nice family that supports and encourages him.”

“I have had seven great years driving sprint cars for Kasey Kahne Racing,” said Saldana. “We won a lot of races together and had much success. But I feel like driving for Dan Motter and Motter Motorsports is the best opportunity I have ever had in my career. I have more involvement with this team and more input into every aspect of what we are using for the race cars and engines.

“I am in the best physical condition I have ever been in, and I feel like we can do great things together. I’m very excited to get started.”

Davey Whitworth has been named crew chief of the Motter Motorsports team.  Whitworth, 53, brings a wealth of experience and success having turned wrenches for some of the top names in the sport.  Whitworth and Saldana teamed up in 2002 when Whitworth tuned Saldana to a $50,000 Kings Royal victory at Eldora Speedway.  Together they won 10 World of Outlaw events and finished second in point standings.

Other crew members for the newly-formed Motter team include 10-year veteran Bob Curtis most recently with the Tony Stewart Racing team, and Sean Strausbaugh who worked for Daryn Pittman for the past three seasons in the Pennsylvania sprint car arena.

“We expect to be competitive right out of the gate at the season opener at Volusia Speedway Park in Barberville, Fla. on Feb. 15,” continued team owner Motter.

“I believe with the team of people we have assembled, we will be in a good place to contend for a championship as the 2013 season gets under way.  Time will tell, but we are looking forward to the challenge.  We have a great deal of work to do before the first race.”

Dan Motter is funding the team but is actively seeking marketing partners to share this exciting venture.

Motter raced sprint cars as an owner/driver/mechanic from 1973 to 1981 with the Midwest Sprint Association before turning to team ownership in 1990.   His high-profile teams have included some of the best drivers in sprint car competition, namely Kenny Jacobs, Stevie Smith, and Doug Wolfgang.  Motter chose to retire from racing at the end of the 1997 season.

Saldana tallied his eighth top-five finish, placing fourth in 2012 WOO Sprint Car point standings.  He added five victories to his resume, boosting his total to an impressive 83 career wins, placing him seventh in all-time victories for the category.