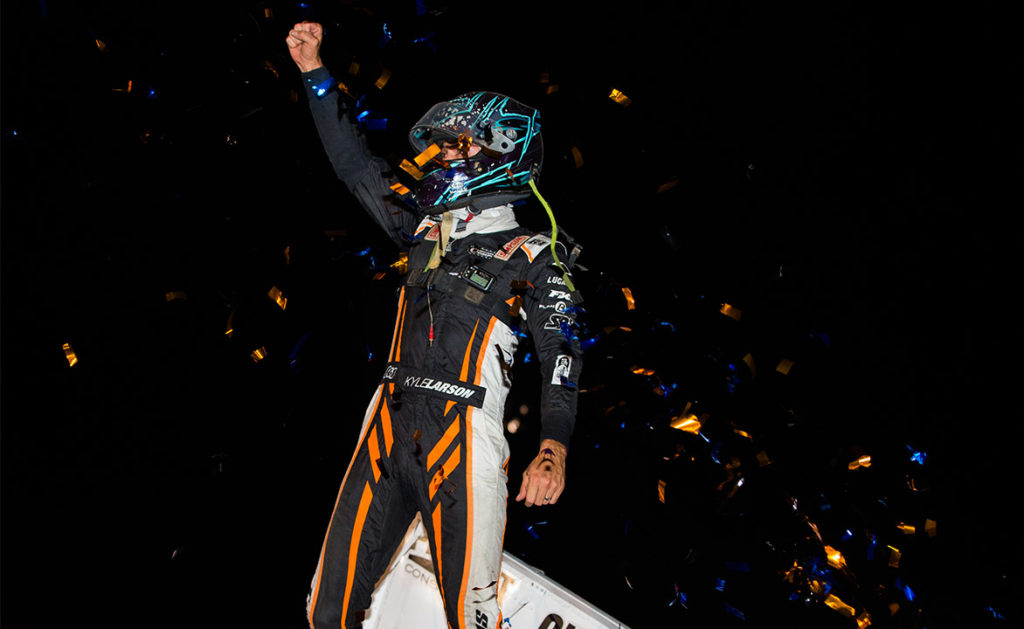 In less than 24 hours, he picked up the win at both tracks – River Cities on Friday and Red River Valley on Saturday night – keeping fans at the edge of their seat both races.

Larson, of Elk Grove, CA, made a last corner pass on points leader Logan Schuchart Friday night to get the win and then had to hold off reigning champion Brad Sweet, Sheldon Haudenschild and Kerry Madsen to secure the win at Red River Valley.

Before the start of the 30-lap Feature, Haudenschild presented himself as the early favorite to run away with the win. From the pole in the six-lap DIRTVision Fast Pass Dash, the NOS Energy Drink driver rocketed to a more than four second lead ahead of Kyle Larson Racing driver Carson Macedo by the end of the Dash.

However, when the green flag dropped to commence the Feature, Macedo took advantage of the momentum built by running the top lane and launched ahead of Haudenschild down the backstretch.

While Macedo held command out front for the first 14 laps, Haudenschild, Larson and Sweet dueled for second behind him. Haudenschild tapped the front stretch wall with his right rear tire on the second lap, making an easy pass for Larson. Sweet passed Haudenschild three laps later and then soared around the top of the track to steal second from Larson two laps after that.

Larson didn’t let Sweet out of his sight, though. As the NAPA Auto Parts #49 car ran down Macedo, the Finley Farms #57 lurked behind him, waiting to strike.

Making the most of the bottom lane, Larson got a run underneath Sweet down the front stretch on Lap 13 and carried it into Turn 1 to not only move past Sweet but to power by the car he owns for the lead, as well. Sweet passed Macedo for second the next corner to setup another family feud with his brother-in-law for the win.

With 14 laps to go, Kevin Ingle spun off Turn 4, did a 360, and kept going with the two leaders entering the picture. His maneuver blocked Larson’s run down the front stretch and provided Sweet with an opening to dive under Larson going into Turn 1 and take the lead. However, Sweet’s rear end stepped out on the exit of Turn 2, not allowing him to mash the throttle as soon as he’d like. That provided Larson with the opportunity to drive back by.

Traffic continued to be an obstacle for the two drivers. With the top and bottom lanes occupied by slower cars, Larson and Sweet became more acquainted with the brake pedal every corner. Sweet did a better job of finding the openings around the lappers and got a run around the outside of Larson in Turn 1 to reclaim the lead with 11 laps to go.

The sole caution of the night came out with 10 laps to go, setting up a 10-lap brawl for the victory. Haudenschild was brought back into contend, along with Kerry Madsen, who had been on the charge from 10th.

Sweet got a solid launch on the restart, leaving Larson to fend off Haudenschild and Madsen. However, it only took a lap before Larson was back in his rhythm and hunting down “The Big Cat.” Knowing Larson had the bottom figured out, Sweet switch from the top lane to the bottom to block any potential runs by his brother-in-law.

When he went low, Larson went high. And it benefited Larson the most. While ripping the top through Turns 1 and 2 with seven laps to go, Larson blazed around the outside of Sweet. He reclaimed his crown as the leader and held on to it for the final six laps without any challenges to pick up the $10,000 check, his third World of Outlaws win in-a-row and ninth win with the Series this season.

“That was a fun race there,” Larson said. “Early, Brad was really really good. I though he was good all race. He could get the top going in (Turns) three and four really well. Anytime I go down to the bottom I’d see him blaze by me on the top. Then the caution came out and he’d seen me running the bottom a lot in (Turns) one and two. I figured I was going to have to get something going differently than him. I was able to get the top going in (Turns) one and two and able to get down the backstretch good.”

Sweet’s runner-up finished concluded a solid weekend for the defending champion, of Grass Valley, CA, who finished fifth the night before. He had dealt with bad luck the past few weeks but was able to gain points Saturday night and leaves North Dakota eight points behind leader Logan Schuchart – who finished 10th.

“Obviously, disappointed we finished second,” Sweet said. “I thought I had a better car through lap traffic. Being able to change lanes. Got the lead there with 10 to go and made a misjudgment on my end. I thought I needed to be on the bottom. I needed to react a little quicker to get to the top… Once he got around me, I was ready to change my line then. Just a split second too late.”

Haudenschild was able to hold off Madsen and round out the podium – his first podium and top-five in four races.

“I didn’t really get myself positioned too well there,” said Haudenschild, of Wooster, OH. “I got into the front stretch wall. A couple of guys got by me and had to do a little bit of work after that. But man, this NOS Energy Drink #17 was really good tonight.”

His performance helped bring him back within 100 points of the championship lead – now 92 points behind Schuchart.

Hometown favorite and 10-time Series champion Donny Schatz, of Fargo, ND, also made a small gain with his seventh-place run at Red River Valley. He is now 58 points behind Schuchart.

David Gravel, again, made big gains for Jason Johnson Racing in the team championship points. With his sixth-place finish at Red River Valley, JJR is tied with Schuchart’s Shark Racing team for the points lead with less than 20 races to go this season.

The World of Outlaws NOS Energy Drink Sprint Car Series makes its return to US 36 Raceway in Osbron, MO on Sat., Aug. 29. Get tickets by clicking here.

Then, on Sun., Aug. 30, the Series returns to I-80 Speedway in Greenwood, NE. Get tickets by clicking here.

If you can’t make it to the tracks, you can still watch both races live on DIRTVision.