Consistency Key for McMahan in 2014 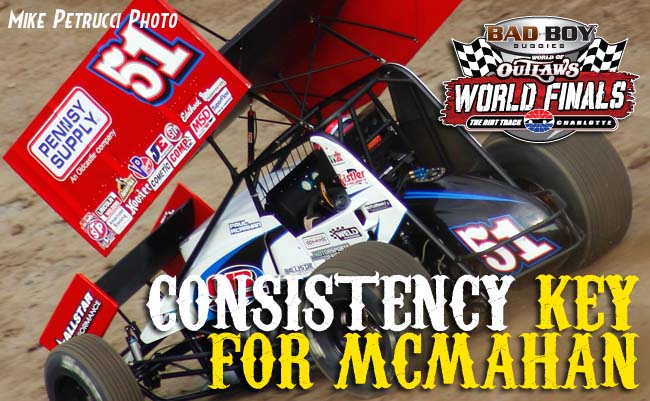 Consistency Key for Paul McMahan in 2014

CONCORD, N.C. – Nov. 5, 2014 – Consistency was the key for Paul McMahan during his 2014 campaign. Wins, top-fives, top-tens and more quick time awards than most with his CJB Motorsports team – McMahan was always out front this season.

A runner-up finish on the first night at Volusia and a fifth place on the second led McMahan into the Dirt Track at Las Vegas. McMahan got around Kerry Madsen midway through the feature and held off a late charging Steve Kinser to score his first win of the season.

McMahan followed that up with a victory at Tri-State Speedway in May.

Perhaps no win meant more to McMahan this year than his victory at Limaland Motorsports Park on July 9 – capturing the race named for his friend and hero, sprint car racing legend, Brad Doty. In victory lane, an emotional McMahan said the win was one of the most important of his career.

“I tell you what, it took me a little bit to collect my thoughts before I got out of this racecar because this just means the world to me,” an emotion McMahan said in victory lane that night. “Brad Doty, like I said, is my hero and I’ve come here many times and never been able to get a win. It’s a normal win, but this is the Brad Doty Classic. This takes every win I’ve ever won away and this is right up top.

“Man, I won the Brad Doty Classic… I can’t believe this, this is the greatest.”

“…I was one of the guys hoping they would cancel it – but thank God they didn’t tonight,” McMahan said. “Hats off to all the track maintenance guys that busted their butts and got that fence back together because when it first went down, I didn’t think we had a chance of racing tonight.”

2014 will be a season McMahan won’t forget anytime soon.

The driver set a new single season win record for himself, besting 2013’s four wins as he approaches Bobby Allen on the all-time wins list.

As McMahan and his CJB Motorsports team head into the Bad Boy Buggies World of Outlaws World Finals, he sits firmly in the third spot in the 2014 World of Outlaws STP Sprint Car Series championship standings. It would be the second year in a row McMahan has finished in third.