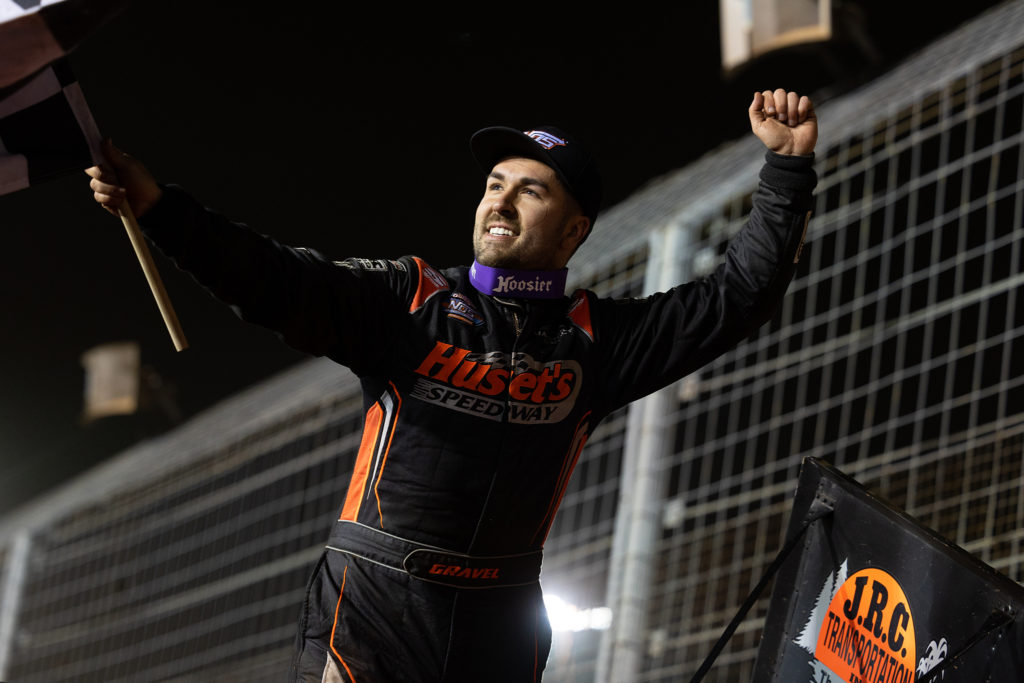 With the points situation a foregone conclusion, David Gravel was relaxed and comfortable as he returned to The Dirt Track at Charlotte, one of his best tracks on tour.

The Watertown. CT native followed up the return of World Finals with his 69th career World of Outlaws NOS Energy Drink Sprint Car Series win, bringing the Big Game Motorsports driver to 11 victories in the 2021 season alone. He’s already got a career-best runner-up result in the bag when it comes to the championship, so for DG, it’s all about building momentum for a run at the title in 2022.

He found his next glimmer of hope for that sophomore season with Tod Quiring’s operation in Friday’s opener to the NGK/NTK-sponsored season finale, an event that saw him use both skill and luck to park the #2 in victory lane.

Leading the final 12 laps after Logan Schuchart’s unfortunate demise, the 29-year-old held off a relentless run from Brian Brown to earn his fourth win in the last five races at The Dirt Track at Charlotte. More impressive, Gravel’s handful of W’s at the 4/10-mile oval has occurred with three different organizations including CJB Motorsports, Jason Johson Racing, and now Big Game.

The consistent championship contender surpassed Joey Saldana and Jason Meyers on the tracks’ Outlaw win list, leaving him now second to Donny Schatz, who owns 13 wins at the Concord, NC facility. Gravel returns to The Dirt Track on Saturday evening with a chance at his second sweep (2019) of World Finals weekend.

“The track was good,” Gravel noted. “The curb got gnarly in turns one and two. I didn’t want to make any mistakes in lap traffic, but I knew I slowed down a little bit. It’s hard to give something up and move out of your lane during something like that. It feels good to get a win. I hadn’t quite sealed up second in the points yet, so I wanted to get that done. Now let’s go tomorrow and have some fun and hopefully get another.’

Friday’s 0.881-second victory was another big boost in the confidence with Cody Jacobs as crew chief on Gravel’s #2. An 11-win season with championship runner-up honors in their first season together is something that stands as wildly impressive against The Greatest Show on Dirt.

Finishing second with a last-lap, last-corner pass was Kerry Madsen. The Madman slid by Brian Brown coming to the checkered flag and earned his 14th top-five finish in 22 World of Outlaws races this year aboard the Tony Stewart/Curb-Agajanian Racing #14.

Rounding out the podium in the World Finals opener was Grain Valley, Missouri’s Brian Brown, who returned to the site of his first-career World of Outlaws win in 2014. He threw several attempts at the lead on the final restart but fell just short aboard the FVP Parts, Casey’s General Stores #21.

“What a fun race,” Brown said afterward. “I took the lead with that slider for lead, but David got me back each time. Our engines with Charlie Garrett take off so good, and that’s what you’re seeing here tonight.” Hopefully, we’re back up here talking to you guys tomorrow night, too.”

The main story through the opening half of the 30-lap NOS Energy Drink Feature was Logan Schuchart, another Charlotte ace looking to extend his successes at the track.

The Shark Racing superstar roared to the lead on Lap 2 with a brilliant three-wide move and ran off with a commanding lead until a flat left rear tire sent the Drydene Performance Products #1S to the work area on Lap 18. He still recovered to finish a respectable ninth-place, but that only leaves them hungrier for a victory lane trip tomorrow night.

UP NEXT: The World of Outlaws NOS Energy Drink Sprint Car Series will conclude the 2021 season with the 80th and final event on Saturday night at The Dirt Track at Charlotte. If you can’t attend the NGK/NTK World Finals in person, you can watch every lap LIVE on DIRTVision.