Skip to content
CLASSIC IN THE MAKING: Setting The Stage For The Capitani Classic At Knoxville
Tags: Aaron ReutzelBrownells Capitani Classic presented by Great Southern BankDavid GravelKnoxville RacewayKyle LarsonLogan SchuchartThe One and Only 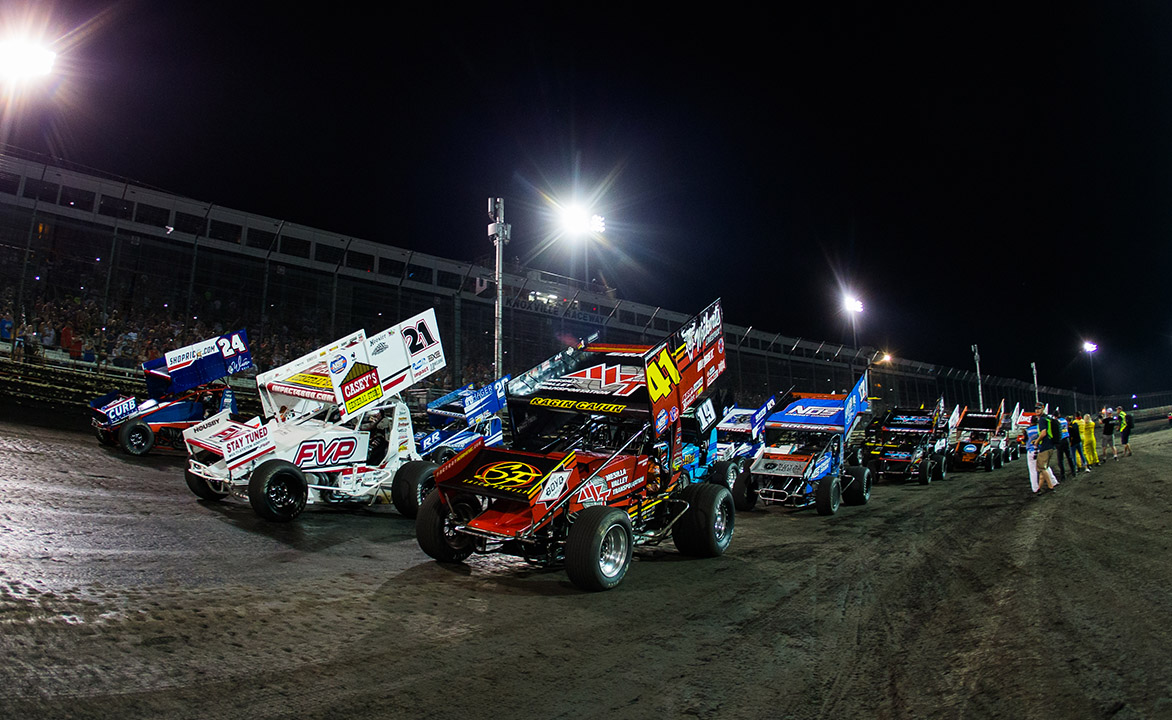 Two epic nights of “The One and Only” have led to Saturday’s prestigious $50,000-to-win Brownells Capitani Classic presented by Great Southern Bank at Knoxville Raceway.

Seventy drivers entered and only 24 will get the chance to compete for the biggest purse of the year.

The four drivers have been the class of the field the past two nights and are poised to put on a show.

Gravel, of Watertown, CT, has come to thrive when the pressure is on to win at Knoxville. He won his first Knoxville Nationals title last year and then backed that up with a win at the raceway in May after the Series had to take a two-month hiatus.  On Friday night, he overcame challenging conditions and a late race charge from Larson to claim his ninth win overall at the Sprint Car Capital of the World.

With Saturday’s race still paying full points toward the World of Outlaws NOS Energy Drink Sprint Car Series points standings, a win for Gravel could potential put Jason Johnson Racing in the points lead for the team points. JJR is currently six points back from the lead behind Shark Racing.

Larson, of Elk Grove, CA, has been one of the most dominant drivers at Knoxville this year. Before having to settle for a runner-up finish Friday night, he was on a streak of four wins in a row at the track. While the Knoxville Nationals – an event Larson has yet to win – had to be postponed to 2021, he has said if he wins the Capitani Classic he would probably still consider it a Nationals win because of the stout level of competition and the unique format.

“It’s definitely a cool format,” Larson said. “I feel like it rewards guys who go forward when you hit the race track. We were able to do that. We didn’t qualify well, but we were able to pass cars every time we were on the track. It’s put us in position to go for the big win.”

Logan Schuchart, of Hanover, PA, is searching for his first World of Outlaws victory at Knoxville and has shown the speed needed to get it done. He made an incredible charge from 22nd to second in the Knoxville Nationals last year. He finished second Thursday night and rebounded from a poor start to the night on Friday with a run from 21st to ninth. A win tonight would hold an extra sentimental value as this year is the 30th anniversary of his grandfather Bobby Allen’s 1990 Knoxville Nationals victory.

“This Drydene Performance race car is fast,” Schuchart said. “The guys are working hard. We’ll see what we can do.”

Aaron Reutzel, of Clute, TX, has proven to have a handle on any Knoxville format – putting himself in the top-five for the past two Knoxville Nationals – and now one of the top four drivers during “The One and Only.” A key factor to that is the speed he has every time he hits the black zook clay. He claimed two wins at the half-mile earlier this year and finished third and 10th, respectively, during the two opening nights of “The One and Only.”

“I feel like we keep getting better and better every time we come here,” Reutzel said.

The remainder of the field will be split into four Qualifier races – lined up by their combined points from the first two nights. The winner of each Qualifier will join Gravel, Larson, Reutzel and Schuchart in the DIRTVision Fast Pass Dash. However, the four locked in drivers will draw for positions one through four, while the Qualifier winners will draw for positions five through eight.

The top four in each Qualifier is locked into the Feature and the rest of the field will either go to the D-Main, C-Main or Last Chance Showdown.

The Brownells Capitani Classic presented by Great Southern Bank and the entire event for “The One and Only” will be marked as one of the most historic events in the history of the World of Outlaws due to the unique circumstances that have brought it to life. Only one driver will take home the $50,000 check, the trophy and the claim to history.

Grandstand tickets are sold out for the event, but limited pit passes still remain.

If you can’t make it to the track, you can still watch the race live on DIRTVision, starting at 7pm (CT).

📈 FULL POINTS BREAKDOWN 📉#TheOneAndOnly points have been sorted after two epic nights of racing with #WoOSprint @NosEnergyDrink Series at @KnoxvilleRaces!