The Grove: Checkered Past 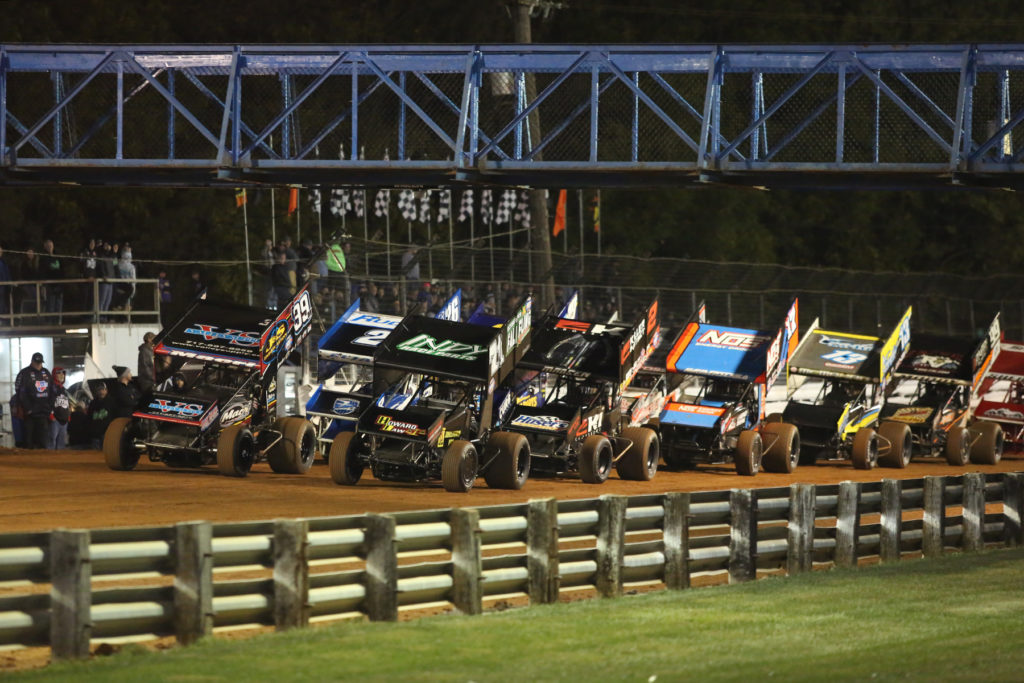 It is the Yankee Stadium or Soldier Field of Sprint Car Racing. To step into the 82-year-old Williams Grove Speedway is to step back in time. Anyone with any sense of history can feel the ghosts, aura and spirit of its early warriors. And as dirt ovals go, The Grove is as quirky as Fenway Park. Visiting sluggers have found the track so vexing that their evenings often end atop a trailer as an observer.

Pipeline chutes feed a corner radius sharper than speedways half its size. Its south end is banked and wide; the north bend is not. Such asymmetry keeps cars from being perfect. Drivers must compensate at one end for shortcomings on the other. Engines scream blue murder in Turn 1 then quiet to a whisper in diabolical Turn 3 when the dirt takes its customary shine. In contemporary terms, Williams Grove Speedway is “a technical track” because missing a launch point by one inch can mean not launching at all.

The Grove opened on May 21, 1939, with a “Big Car” feature won by farmer Tommy Hinnershitz. In historical terms, Tom topped an Eastern Sprint Car race governed by the American Automobile Association that sanctioned all major open wheel events through 1955. The beginning of The Grove coincided quite conveniently with the opening of the Pennsylvania Turnpike two miles away. Williams Grove Park may have been across the street, yet Williams Grove Speedway was technically in Mechanicsburg — a borough of 9,000 just across the Susquehanna River from the Pennsylvania state capitol of Harrisburg. The track was idle during World War II then added lights, pedestrian tunnel, and an ominous iron bridge across its backstretch.

Hinnershitz was easily The Grove’s most popular performer, routinely routing Indianapolis 500 stars with inspired rim rides. AAA yielded to the United States Auto Club, yet Tommy whipped them all the same. When he retired, a decade passed until partisan fans got to celebrate USAC’s defeat by Mitch Smith in 1971. To see how they rallied around Tommy and Mitch is to better understand today’s rivalry with the World of Outlaws.

Friday Night Lights began with full stock cars that slimmed down into Sprint Cars. The race that hastened that transition was Williams Grove’s initial National Open in 1963 when Michigan’s Gordon Johncock became the first to win with a wing. Still, it took several years before all competitors recognized the importance of air flow. Horsepower and ballast were more primary concerns. Bobby Abel’s “bug” weighed 1,200 pounds yet proved no match for the four-bar Trevis Craft that housed Budd Grimm’s Ford and its driver Ray Tilley, still The Grove’s single-season win record holder with 21 in 1966 aboard his wolf in sheep’s clothing. That winter, Richwine and Jack Gunn threw their rules away and began the weekly Sprint Car Era.

Gunn moved from the announcing booth to the front office in 1968. He decided to widen and bank Turns 1 and 2 in 1970 just in time for the landmark arrival of Jan Opperman from California by way of Nebraska. Gunn recognized his region as a destination for gypsies like Jan and fostered relocations by Opperman, Kenny Weld, Bobby Allen and countless others. Jack built his Sel-Wil circuit (it later became Keystone Auto Racing on Speedways or KARS) into the “world of outlaws” of 1975 when fans on any given Friday could see stars from Los Angeles, Kansas City, Dallas, or Miami.

When the World of Outlaws began in 1978, they were simply not as skilled as Grove stars such as Steve Smith, Kramer Williamson, Smokey Snellbaker, or Lynn Paxton. But that talent gap was gone within three years after Steve Kinser established himself as America’s strongest. So completely have those tables turned locals now find it almost impossible to respect anyone who has yet to repel those invasions. Gunn started his Summer Nationals in 1972 and molded it into the Outlaw tour of 1979-80. What is an outlaw’s greatest fear? A posse, of course, coining the “Pennsylvania Posse” logo visible on T-shirts and biceps.

Though the club’s initial concept was “run what you brung” open competition, the World of Outlaws grew weary of carrying three sizes of wings, so it created in 1982 a national standard of 25 square feet across the top and 2×3 over the nose, measurements which remain unchanged. Two years later, big blocks owned by Bob Weikert and Al Hamilton humbled touring professionals so The Outlaws outlawed engines larger than 440ci. After another year, it was reduced to the 410 number still in use. Such sweeping changes could not have occurred without the World of Outlaws and Williams Grove because the whole “Us Against Them” rivalry would suffer under two different rulebooks. Even when Outlaws mandated stiff Goodyear tires, so did The Grove.

Name a class of car and Williams Grove probably hosted them: sprints, midgets, champ cars, karts, late models, modified stocks, NASCAR’s premier division, and the unique “super sportsmen” popularized by Mechanicsburg’s budget-minded oval, the late, lamented Silver Spring Speedway. The number of Williams Grove winners who honed their craft at “The Springs” stretches from Jim Sheaffer to Bobby Weaver, Maynard Yingst, Joey Gravino, Joey Kuhn, Dave Calaman, and Mark Smith. When the 358 Sprint Car engine was introduced in 1989, it replaced sportsman as the major training ground. The Spring’s closure in 2005 prompted The Grove to create a Saturday show for the displaced division.

Richwine sold Williams Grove Speedway to New Jersey’s Morgan Hughes in 1972. Hughes died in 2007 and willed the place to his daughter Kathleen. She has maintained control during this era of social media when early cancellations cause an avalanche of scorn. Facebook and Twitter would have sent Jack Gunn to his grave sooner than 1980.

Williams Grove Speedway’s long and illustrious tale can be told by tracing eight decades of glory orchestrated by David Walton Brown, peerless engine builder and crew chief. Davey’s overhead cam engines helped kill the flatheads by 1960 when Brown’s unbeatable driver was John Mackison. Davey dominated with Dick Tobias in the 1960s, Lynn Paxton in the ’70s, Doug Wolfgang in the ’80s, and Billy Pauch in the 1990s. In this millenium, Brown has excelled with Don Kreitz Jr. and Don’s driver of the last six seasons, Lance Dewease, the only man in Williams Grove history with more than 100 feature wins. That trio’s collective experience is unrivaled.

Only last month, Williams Grove saw fit to honor 86-year-old Davey Brown in his lifetime. He smiled and waved, then resumed the task of whipping the World of Outlaws that he first enjoyed at the 1978 National Open. Anywhere else in America, people cheer The Outlaws. But at The Grove they heckle Outlaws as if they were the Chicago Bears visiting Lambeau Field.