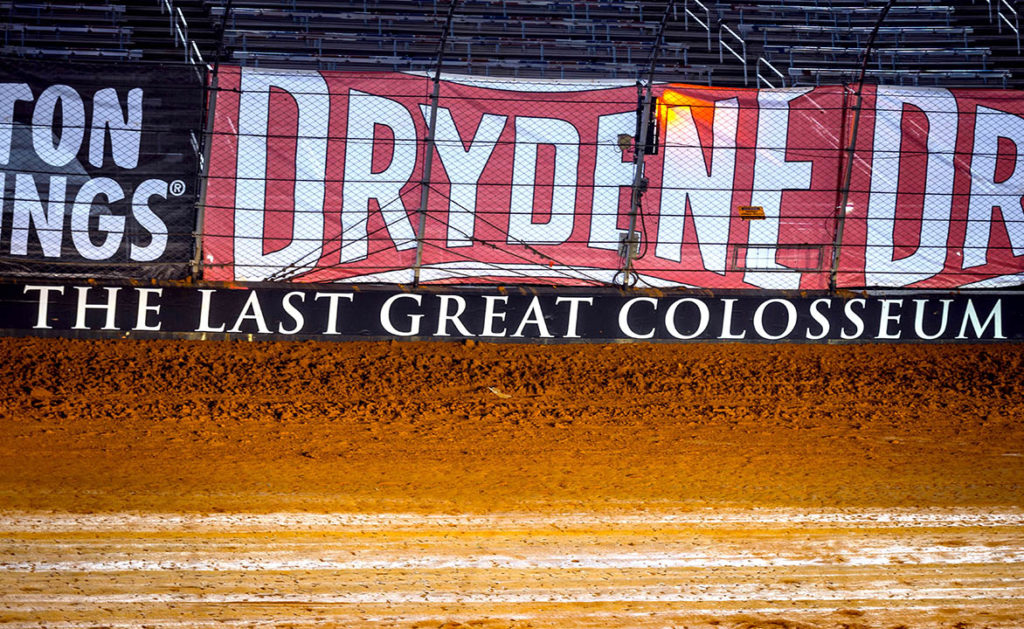 “Dirt is for racing. Asphalt is for getting there.” A witty slogan to some but religion to others. Scour the Eldora camps and it may be a tattoo. Dirt is the Earth’s first surface obviously. When chariots conducted the original oval race, no gladiator pitted for fresh tires.

Science created asphalt as “a thick, sticky, dark brown mixture of petroleum tars” often confused with macadam, which is “pavement made of layers of compacted broken stone usually bound with asphalt.” No two blends are identical just as no two dirt samples test the same. America has infinite shades of soil, sand, and soil with sand. Sand being an aggregate to pavement, tracks in Michigan or Massachusetts find it prudent to simply paint lanes like a highway.

Auto racing organizers place business ahead of preference. They monitor public opinion and swing with the winds of change. Sixty years ago came a trend to tidy dirt with tar. Twenty years later saw a return to Earth. Roughly 10 years ago was when arenas such as Bristol Motor Speedway adopted the exhaustive idea of temporarily spreading dirt. When the architects wished to see how fast their impromptu ovals could be circled, the World of Outlaws were summoned. Bristol saw Tennessee’s own Sammy Swindell average an astonishing 134mph. Swindell has ransacked raceways that began as asphalt then turned to dirt and others that changed surfaces multiple times. Examine them by seniority.

The Tennessee State Fairgrounds in Nashville held its first race in 1904. That dirt mile existed until Bobby Grim’s 1957 IMCA Sprint Car conquest. An inner half-mile of macadam built banking to 35 degrees until three guys died and 11 degrees were cut. It closed as Music City Motorplex in 2009 and lay dormant until its brief dirt revival in 2019 when Donny Schatz and Shane Stewart split Outlaw honors.

Flemington (NJ) Fairgrounds first raced in 1915. Flemington was on the second Outlaw schedule of 1979 until fears of police harassment canceled it. Three years later when the series did breach the Garden State at Bridgeport, state troopers demanded firewalls, fuel line covers, fluorescent switches. Outlaws did not fly around Flemington until 1989 when Doug Wolfgang clocked an honest 116 MPH. After three visits in two years, The Square felt the lash of tar mops. Asphalt bought an extra 10 years.

New Bremen (OH) Speedway began as 1926 dirt. It spent 1967-78 under asphalt and the last two as daytime dirt. Sundays were unpopular with neighboring churches. When he surrendered his lease to concentrate on Eldora Speedway, Earl Baltes stipulated that New Bremen never reopen. The town agreed. Steve Kinser closed the place when he beat The Outlaws on September 1, 1980.

Sharon (OH) Speedway opened in 1927. Nearly a century later, the track in Hartford is still titled for a town in Pennsylvania. Sharon had her pavement period (1971-79) then did 20 years with dirt on its flat half. When prodigal son Dave Blaney purchased his hometown track in 2002, he placed the present track inside the original. Outlaws return next month on Friday, May 22.

Portland (OR) Speedway started as City of Roses half-mile in 1936. When auto racing resumed after World War II, Portland was paved and remained so until 2000-01 when Skagit champion Fred Brownfield brought the World of Outlaws. Stevie Smith’s Black Bandit posted an eternal standard of 113 MPH.

Bakersfield (CA) Speedway in Oildale opened as a dirt quarter on May 5, 1946 when Fresno’s famous Bill Vukovich was victorious. It changed surfaces no fewer than five times. Oildale staged Outlaws 10 times in 30 years.

Berlin (MI) Raceway west of Grand Rapids raised its curtain in 1947. It was dirt for its first 20 years then asphalt to this day. Berlin tried the temporary dirt option in 2012-15. Outlaws arrived for the final two, both won by Donny Schatz.

Rockford (IL) Speedway opened on May 26, 1948 when Johnny McDowell won the midget feature. It has remained an asphalt quarter for 63 years with the exception of one weekend in 2016 when dirt brought World of Outlaws with wings and fenders.

Plymouth (IN) Motor Speedway was Capitol pavement in 1952-2012. They put a dirt quarter inside before coating the original oval. PMS (“The Track With an Attitude”) has served as Hoosier Racing Tire test pad under Irish Saunders and ex-New England modified racer Ed Kennedy. They have held three Outlaw dates.

Mansfield (OH) Raceway opened in 1959 and remained dirt through 1996. Baltes ran the show. Earl’s biggest crowds arrived on All Star Speed Week. Mansfield held three Outlaw races in 1980-81. It was dusty even by Ohio standards. Millions of dollars buffed it into a palace worthy of NASCAR. New guys called it Spitzer Motor Speedway before the 2018 tenant threw dirt and $100,000 at Tim Shaffer then bailed.

New Egypt (NJ) Speedway was called Fort Dix in 1960-68 for proximity to an Army base. Its quarter-mile of asphalt became a bigger dirt track in 1998 and larger still by 2001. Outlaws appeared nine times with Daryn Pittman (Kasey Kahne 9) winning four straight.

Fulton (NY) Speedway was asphalt in 1961-78. As a dirt track, it helped create the Empire Super Sprint series in 1984. The World of Outlaws debuted in the summer of 2005, but Fulton’s last three Outlaw dates were October portions of Super DIRT Week.

Bristol (TN) Motor Speedway’s tilted tar opened with 500 NASCAR laps on July 30, 1961. After eight years, banking sharpened from 22 to 36 degrees. Bristol chose economical concrete in 1992 as did Martinsville and Dover. Bristol brought dirt and World of Outlaws in 2000-01. Numbers on the radar gun pale when compared to Bristol’s seating capacity of 160,000.

Madison (WI) International Speedway began as a quarter in 1963 then expanded to Capital Super Speedway in 1969 as a high banked Dairyland version of I-70 right down to the dirt that turned it to Impact in 1987-88. Madison has been blacktop since 1992.

Colorado National Speedway opened above Erie in 1965, brought Outlaws to Denver for the club’s first decade then went asphalt to remain the center of Rocky Mountain motorsports.

Elko (MN) Speedway’s pavement has been a Twin Cities staple since 1966. For five years, Elko added the dirt option then returned to regular programming. Only the final dirt season of 2013 included Outlaws topped by Tim Kaeding and Dennis Roth.

Metrolina (NC) Speedway staged its first race in 1968 and spent five years as red dirt. Ned Jarrett became its promoter in 1974 and buried Charlotte dust with hot tar. Ned fled after four seasons and the surface turned red again. Outlaws last visited in 1995 when Mark Kinser flattened everyone like a Wirtgen steamroller. Metrolina ended as Sunset Speedway in 1998.

Missouri’s I-70 Motor Speedway in Odessa opened on August 8, 1969 when Jay Woodside was the winner. Jon Backlund averaged 104 with no roll cage. Greg Weld turned I-70 into breathtaking dirt in 1981-87. Sammy’s scorching lap of 120.61 MPH was a World Record. Weld’s departure cleaned away the dirt. I-70 returned to asphalt until closing in 2008. Until the pandemic, I-70 was slated to host the World of Outlaws for the first time in 36 years. Barring rain, that blessed event will uncork in a few weeks on Friday, April 30.

Oklahoma’s Tri-State Speedway is confused. Many call it “Fort Smith” even though that town is in Arkansas. And what is the third state in its title? Texas or Missouri? What began in 1971 as a Mickey Mouse quarter (actual name) then expanded as asphalt for six years. Pocola has been abrasive dirt ever since. In its only Outlaw visit in 2010, Tri-State burned more tires in 30 laps than Rusty Wallace ever did in 300.

Big H Motor Speedway was the second Texas track to host Outlaws in 1979 and did so for 15 straight seasons. Three years after Battleground became Houston venue, Big H converted to the paved Houston Motorsports Park, which is not to be confused with the Houston Raceway Park that hosted the series as recently as 2016.

For five years, Lanier (GA) National Speedway existed as the dirt track adjacent to Road Atlanta. Mark Kinser scored the first of 203 series checkereds at Lanier in 1985. It was blacktop in 1987 and bolted shut by 2011.

Memphis (TN) Motorsports Park was a paradise in 1987 when NHRA drags, SCCA road racing, and World of Outlaws were all included. After three years, the dirt track was reduced then closed in 1996 to become backstretch for a NASCAR tri-oval. Behind its big new bleachers was a kart track that was stretched to accommodate sprint cars and closed after 2007.

Kansas City’s second Lakeside (KS) Speedway was paved in 1989-99. As one of two asphalt arenas in series history, Lakeside is the only one to later book Outlaws on dirt as well.

Heartland Park Topeka (KS) took the wraps off a new dragstrip and road course in 1989. Ten years later, Topeka was the first to temporarily coat asphalt with mud. Heartland opened its current dirt track in 2001 and hosted six Outlaw features. The first half went to Danny Lasoski; the second half to Schatz.

Dodge City (KS) Raceway Park was built by the city in 2000 as a pristine paved oval. That lasted four years. Since 2004, DCRP has been a dirt track. Dodge was where Jacob Allen became a series winner in 2020.

You can see the World of Outlaws NOS Energy Drink Sprint Cars return to Bristol Motor Speedway for the first time in 20 years during the World of Outlaws Bristol Throwdown, April 22-24, accompanied by the Super DIRTcar Series. Get your tickets at BristolMotorSpeedway.com.