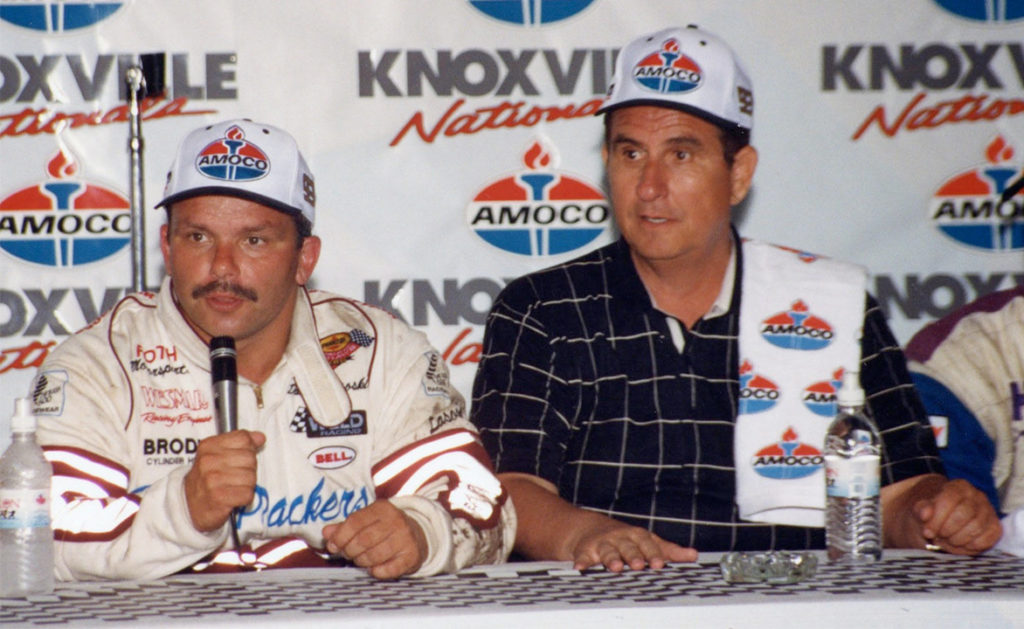 The World of Outlaws has long served the bold. It needs drivers bold enough to aim at concrete walls without lifting. It requires mechanics willing to sacrifice time with family to barnstorm car washes and truck stops. And promoters bold enough to challenge Mother Nature every weekend.

Then there are car owners, the sport’s most precious resource. Even the best operates at a loss. The weak disappear overnight. All spend ridiculous money, but Outlaw owners add international travel expenses. Their love for the sport will see them cut checks for cars that seldom win and crewmen they seldom see. In the wacky world of auto racing, these job creators may be the boldest of all.

Central California’s Dennis Roth has owned Sprint Cars for 30 years, which makes him tougher than a two-dollar steak. Such an analogy is ironic because sirloin steak has kept his #83 car on new tires. Roth’s cattle companies, which have evolved from Beef Packers to Southwest Hide to Ore-Cal Trucking to HR Livestock to all-encompassing Roth Enterprises, have donned the hood of every Roth Motorsports machine and visited Victory Lane with a plethora of Sprint Car legends. This year, those sponsors have helped bring All Star champion Aaron Reutzel to the World of Outlaws trail in 2021.

Roth’s first Sprint Car was a Rebel 360 driven by Todd Ventura – his nephew – who won the 1993 championship at Kings Speedway in Hanford. Dennis eventually delegated Todd the tasks of hiring and firing racing personnel. “Straw boss” one crewman called him. Ventura was Roth’s team lieutenant until recently when son Brent Ventura assumed the role. Their list of drivers is staggering. No one lifted more men (14) to Victory Lane with the World of Outlaws than Dennis and only five guys have more wins (96) as a series owner.

The first hint that the Northern Auto Racing Club had a new player was in 1993 when Memphis-raised Lee Brewer found Beef Packers. They hit national television during the ’93-94 winter series when Brent Kaeding brought Roth to the Arizona desert. Roth recorded his first NARC victory with Greg DeCaires and first ran the Knoxville Nationals with DeCaires in 1994.

Roth and driver Joey Saldana became World of Outlaws rookies in 1996. They lasted half a season. Roth then ordered the operation home and hired Paul McMahan, who was later replaced with Randy Hannagan. Lasoski was Knoxville’s biggest winner

Lasoski was Knoxville’s biggest winner, but never claimed the Nationals until throwing his saddle on Fresno horses. He came within 71 points of Mark Kinser’s 1999 title. Roth brought Jac Haudenschild to Tulare to win on Thanksgiving 2000. Haud hit the road for Roth in 2001. He was then replaced with Saldana and Kahne. Dennis won a Cotton Classic at Kings with Tim Shaffer and put Timmy on the trail in 2002, adding Sammy Swindell for most of that season.

Mark and Karl Kinser were early 2000s hires for Roth and won twice for him but lost another at the scales. Dennis simultaneously dominated western affairs with Tim Kaeding. Ohio Speed Week and Nationals were Tim’s rewards. Kaeding and Kinser finished first and fourth at Calistoga to close Mark’s epic career. T.K. was Roth’s rookie on the road in 2005.

Jac Haudenschild always had a home in Fresno and won Dennis a second Limaland Speed Week date. Roth paired Jac with Tim through most of the World of Outlaws season, the first without Ted Johnson as CEO.

There were few short hauls when Dennis and Danny returned to full-time Outlaw status in 2007, ending third in standings. Shane Stewart’s full-time Outlaw gig with Roth came in 2008. One win was far short of expectations, least of all the boss.

No driver has logged more laps or more victories for Dennis than Tim Kaeding. They were 2011 Kings of the West then topped the 2012 Outlaw circuit at Vegas, Tulare, Antioch and Cedar Lake. When the tour reached home, Roth added Kyle Hirst and began 2013 the same way as Tim topped Vegas and Tulare again. They scored seven more. Kaeding and Hirst were aboard Roth race cars as 2014 commenced. They were second and third at Merced but somewhere between El Paso and Dallas, Kaeding was let go. Lasoski filled in for two weeks before David Gravel got a shot.

Dennis departed the national tour in 2017. He had undergone heart surgery. The Gold Cup opener when Hirst beat the Outlaws while Jonathan Allard crossed sixth in a second Roth racer became one joyous evening. A rejuvenated Roth was back in the national conversation in 2018 when he chose Cory Eliason from Fresno. Right out of the gate, Cory and Dennis won at Stockton, but six months passed before a second win.

Dennis paired with Daryn Pittman in 2019 and as with Eliason, they were Volusia victors who waited seven months for another, though Daryn handed Dennis his first Gold Cup in 19 years. Tulare boasted three Roth cars when the sons of Fresno drag racer Gary Scelzi pitted alongside Pittman. Everyone in Central California had heard how good Dominic and Giovanni Scelzi were since about six years of age.

As soon as Pittman, of Oklahoma, announced semi-retirement in 2020, Pittman promptly won the return to Lawton, OK. Spencer Bayston and Dom Scelzi finished the 2020 Outlaw season for Roth.

Dennis and Teresa Roth are rookies all over again in 2021 with Reutzel of coastal Clute, TX. Aaron’s brazen style raised Bristol hair and checkered flags at East Bay and Williams Grove this year. Fans that watch him rip the lip call Aaron bold. What does that say of the people who hired him? Roth Motorsports deserve at least three cheers, one for each decade.