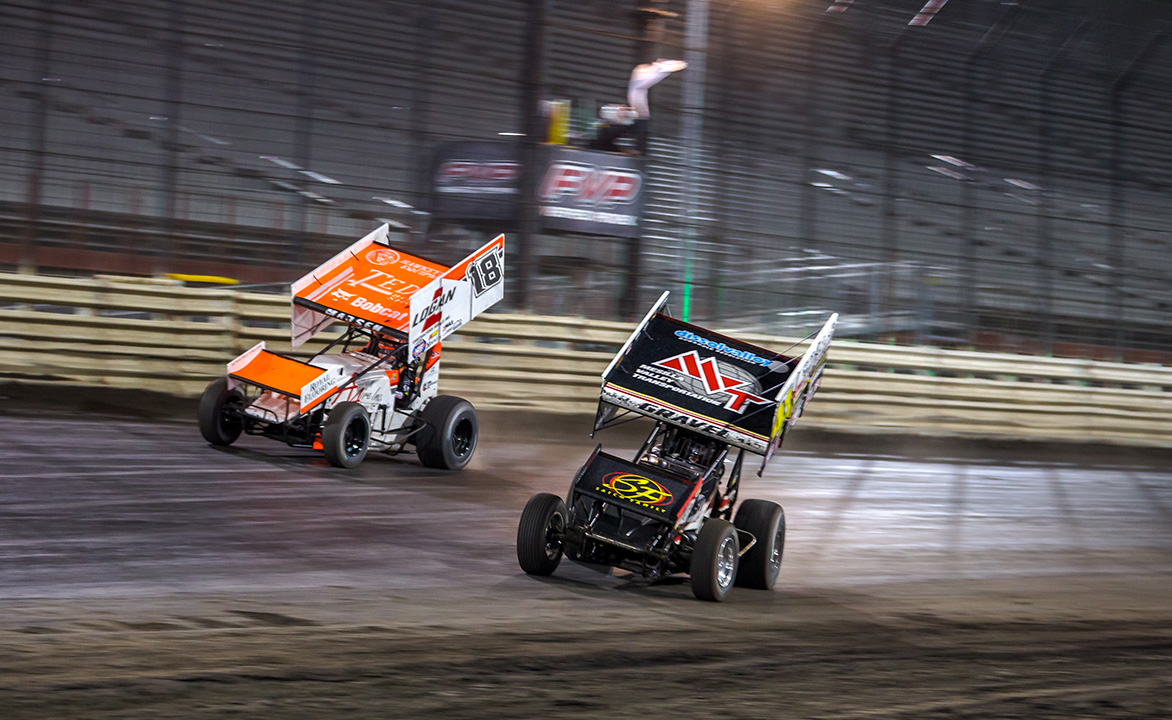 No trips to California. No swings through New York. No banquet. This was “The Year From Hell!” Historians will reflect on 2020 well past the next plague. The global pandemic, called COVID-19, brought the world to a grinding halt. Everyone was told to stay home, buy a mask. Prior to 2020, those who hid faces on their way into a store were presumed to be there to rob it.

Sports staggered on. Basketball and hockey created sterile bubbles. Baseball and football played to empty arenas and artificial noise to “mask” the television experience. Auto racing was not immune. Daryn Pittman, the 2013 World of Outlaws champion, and others were diagnosed with COVID-19 during the season.

Due to their nomadic nature, the Outlaws were able to visit and revisit those states not locked down. Pennsylvania (9), Missouri (8), Iowa (7), Wisconsin (6) and Indiana (5) hosted 35 of 54 Outlaw races in 2020. In another series, 55 features on 29 tracks in 15 states would be a watershed. Outlaws however, race for food. Most strive for 100 paychecks because rain removes 10 or 15. Their pre-COVID calendar held 86 races on 53 tracks in 24 states until quarantines cut out Washington, Montana, Oregon, Arizona, New Mexico, Illinois and New Jersey. To be clear, lost races are trivial when compared to lost lives.

COVID has infected one of every 100,000 Americans at press time. Not everyone personally knows one of these sick people. But everyone knows someone affected by COVID via business or leisure. The World of Outlaws is a business to competitors and management plus leisure for spectators. Fiscal loss trickled through the industry from chassis and engine builders to motel chains, car washes, laundromats, restaurants, rental agencies, airlines, etc. The 2020 World of Outlaws season happened when and where state governments did allow. Races were scheduled and rescheduled on such short notice that it felt like 1979 when Ted Johnson revised Outlaw schedules on fast food napkins.

Only one of a hundred drivers will reflect on 2020 as a career year. Kyle Larson of course, is one in a million. Larson is the exception to all racing prejudice, which is ironic given the racial prejudice that vilified and liberated him. To summarize, COVID enabled idle superstar to race via computer (iRacing) when superstar dropped N-Word; Corporate America washed its hands of superstar, who turned to Sprints, Midgets and Late Models and did nothing but win, win, win. Larson and Paul Silva topped 12 of 26 Outlaw starts at Knoxville (4), I-55 (2), Port Royal (2), Fargo, Grand Forks, Sioux Falls and Attica’s Brad Doty Classic. Writers have run out of words. Between dirt tracks, Kyle went above and beyond all sensitivity classes. Corporate America asked him back, which means he may never again win so often. More importantly, he became a better man.

Best of the rest was Larson’s brother-in-law Brad Sweet, who won eight events and his second straight title. Like Larson, the Outlaw champ graduated Outlaw Karts that rip around Cycleland and Red Bluff about 50 weeks a year. Sweet is only the fifth man to stack back-to-back titles following Steve Kinser, Sammy Swindell, Donny Schatz and Jason Meyers in 2010-11. Kasey Kahne’s third owner’s crown came from Sweet’s science at Beaver Dam (2), Cedar Lake (2), Volusia, Jackson Motorplex, I-55 and I-80.

Seven-time winners with the World of Outlaws were David Gravel, Sheldon Haudenschild and Logan Schuchart yet only Sheldon could call 2020 a career year. Schuchart emerged as Sweet’s tallest hurdle by scorching Jackson (2), Volusia, Lake Ozark, Terre Haute, Devils Bowl and Charlotte yet one less than in 2019. Gravel grabbed wins at Knoxville (2), Williams Grove (2), Wilmot, Lernerville and Charlotte but dabbled in fenders to score four fewer than in 2019. On the other hand, Haudenschild cut a swath through Lincoln, I-55, US 36, Sioux Falls, Dodge City, Wayne County and Kokomo to improve on his five-win season of 2018.

Five feature wins by Donny Schatz was the 10-time champ’s lowest victory output in 10 years. Emerging youth coupled with the trial and error of Tony Stewart’s Ford project starved production. Donny did become the first Outlaw since Jeff Swindell (1999) and Dave Blaney (1996) to throttle a Ford into an Outlaw win circle. Schatz was victorious at Volusia, Ozark, Plymouth, Lernerville and The Grove to raise his lifetime Series count to a tantalizing 299.

Pittman and Shane Stewart were “Sooner Hoosiers,” picking up Outlaw win in 2020. Each hinted at the crazy COVID season being their last on a regular national stage. Time will tell because racers retire as often as boxers. One phone call and they’re out the door. Only Shane stopped The Outlaws with two car owners in 2020: Bernie Stuebgen of Indy Race Parts (promoter of the Kokomo stop) then as Bobbi Johnson’s stand-in for Gravel. Pittman’s season consisted of dusting the exhibition elimination race at Cedar Lake, quarantining, announcing his semi-retirement and then winning Lawton’s first Outlaw race in 35 years. Lawton opened the final weekend of a two-year run for Daryn and Dennis Roth, who finished 2020 with Spencer Bayston and Dominic Scelzi and then hired Aaron Reutzel for 2021. Pittman maintained seventh-place in points on the strength of third-place at Lernerville for Mike Heffner, who joined the Lincoln Speedway promotional team at its most difficult time. Pittman (86) and Stewart (36) own 122 Outlaw victories.

Single winners with the World of Outlaws in 2020 were Carson Macedo and Carson Short at Haubstadt, Parker Price-Miller at Burlington, James McFadden at Lake Ozark and a joyous Jacob Allen at Dodge City. Kyle Larson Racing’s closure made Macedo a free agent before he signed with Jason Johnson Racing for 2021. As an Australian, McFadden’s movements were complicated by coronavirus. No one could fly from Sydney to Chicago, so James slipped into Iowa by way of Qatar. Bobby Allen’s only son had been baptized by fire as raw rookie and after seven seasons and 358 Outlaw tutorials, Jake joined the most elite list.

Winners in the World of Outlaws were a “Mean 13” or baker’s dozen. Half a dozen drivers peaked at second-place: Lance Dewease, Danny Dietrich, Kerry and Ian Madsen, Brent Marks and Austin McCarl. All except Austin have Outlaw wins on their mantle. Dewease has one top-10 in each of the last 29 seasons. Ian hit top-10 with Matt Barbara and Jeff Nehring before they canned him to do likewise with Guy Forbrook and Sam McGhee at the reduced World Finals retitled Last Call.

Fifth marked the season’s highest Outlaw finish by Bayston, Jac Haudenschild, Cory Eliason, Shane Golobic, Tyler Courtney and Brock Zearfoss. All except Bayston and Courtney own series victories but only Tyler had never been among the top-five. Nicknamed by the late Bryan Clauson, “Sunshine” warms Sprints and Midgets for Tim Clauson and Richard Marshall, co-owner of Sheldon Haudenschild’s NOS Energy Drink team alongside Ricky Stenhouse, Jr. Sheldon’s pop remains the only Outlaw with at least one top-10 finish in all 43 seasons.

Ten men settled for seventh-place as their 2020 Outlaw highlight: Sides, Bill Balog, Christopher Bell, Justin Henderson, Lynton Jeffrey, Broc Martin, Dominic Scelzi, Hunter Schuerenberg and past champs Dave Blaney and Sammy Swindell. Broc, of Ohio, was the only one who had never placed as high. Sides has a top-10 in 19 straight seasons. Eighth-place provided the finest Outlaw outings ever by Paul Nienhiser and John Carney II. Notching ninth as their 2020 best was Joey Saldana, Tim Shaffer, Justin Peck and Kasey Kahne himself. The best Outlaw effort of Peck’s blossoming career came as Paul McMahan’s replacement. Saldana’s string of seasons with a top-10 is 27.

Gobrecht’s name has graced the last 22 Rookie of the Year awards with the World of Outlaws. Seven years before Kevin gave his life to I-80, Wayne Johnson made his series debut at the Tulsa Speedway in his Sooner State. The fact that Wayne was the 2020 Gobrecht recipient 28 years after his first Outlaw event seems every bit as strange as selling masks from a souvenir trailer. Stay safe. Stay healthy. Stay alive. Next year will be better.