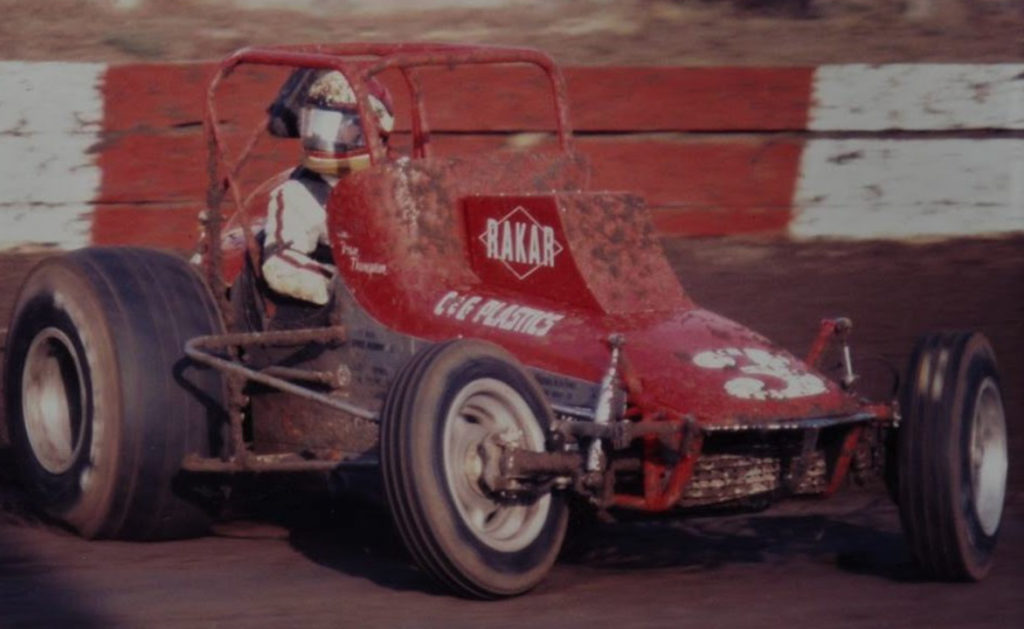 The show “Lost Speedways” is my new old favorite. It is a collection of 30-minute stories of auto racing venues swallowed by real estate development, indifference, outrage or the trees cleared to accommodate them. Jungle Park, Macon, Asheville, Augusta, Metrolina and Hinchliffe Stadium have all been rediscovered. Each episode is a beautiful blend of photography, narration, home movies, aerial mapping and eyewitness accounts.

The show is a passion project of Long Island-native Matthew Dillner. He and brother Bob saw their Islip Speedway silenced for a cookie factory in 1984 just five years after commerce leveled my beloved Reading (PA) Fairgrounds. We share that heartache. I was 15 and angry. How could a worldwide destination where legendary warriors sacrificed their lives become just another place to buy sunglasses? Father explained the fiscal reality of racetracks generating money once or twice per week versus shopping malls that made money every day. Mine was a bitter pill but made closures easier to accept at Nazareth, Flemington, East Windsor and Penn National.

Dillner raised awareness about vanishing speedways through a website that attracted attention from Dale Earnhardt Jr. NBC Sports would not have been remotely interested in Peacock’s niche audience without Star Power. And there is no brighter star in the southern sky. Who else but Earnhardt could ask Richard Petty and Gary Balough to walk through weeds telling stories? If Junior says, “Bring boots, drones and machetes because we’re doing a show about the junk in my yard” people listen.

Earnhardt and Dillner and I are kindred spirits fascinated by vintage cars and the shops, craftsmen and places that created them. During my zig-zags across Rural America, I always pumped brakes when an old track appeared. Many were fenced off and illegal to view so violators can be limited on time. If any bleachers remained stable, I scaled to the highest view. If the flag stand looked firm, I would imagine engines screaming below me. In such a nostalgic state above an open grave, the mind can summon ghosts. Though it may sound melodramatic to revere a racetrack as sacred battlefield, both share the stain of blood. To then sell furniture or chicken sandwiches from that same spot smacks as sacrilegious.

Earnhardt held a particular interest in poking around Metrolina in suburban Charlotte because it was the only track on which his daddy Dale and grandpa Ralph raced one another. Metrolina’s four-wide clip of “The Greatest Sight in All of Motorsports” inspired this article.

The World of Outlaws staged five Features beginning in 1987 when I stooged for Rich Bubak, who saw Charlotte as easy money (Carolinas are 410 free) beyond the many quarters needed to rinse away red sand.

Metrolina was one of 230 tracks on which the World of Outlaws NOS Energy Drink Sprint Car Series has performed. It is one of 41 no longer in business. This piece will spotlight a dozen of the less famous places.

Speedway 117 in Chula Vista, CA was 30 miles southeast of San Diego and one mile north of Tijuana, Mexico. I was a high school senior so hungry to see the California Racing Association that I threatened to walk there, which drained all color from mother’s face as she envisioned human smugglers. As a protective parent, she twice drove me to the gate and burned a few hours until retrieving me. My first visit was easily won by Chuck Gurney in a Don Maxwell chassis owned by Ace Noffsinger, father to one future CRA champion and one Ascot fatality. I felt certain of being the only person in Chula Vista’s low bleachers who had seen Gurney get sideways at Reading three years before.

Firebird International Raceway along I-10 in Chandler, AZ contained a dirt track in 1983-89. At the end of ‘83, Doug Wolfgang (Nance 1n) and Charlie Swartz swept victories with winged Sprints and wedge Late Models. Driving to a Chandler checkered in 1984 was Ted Lee, who later fielded Haudenschild on the Outlaw trail. Sprint Car Owners of Arizona arrived in 1987 when Billy Boat stood supreme. Every club and class in the Copper State existed in the shadow of Manzanita. When the United Sprint Association divided wings in 1989, it snatched the sanction for Manzanita while Outlaws opened at Firebird. Their summer return marked the only series success by San Jose’s Chuck Miller. It was also the end of the oval. Firebird’s drag strip did flourish long before legalized gambling rebranded it as Wild Horse Pass Motorsports Park.

US 131 in Martin, MI had a real checkered past. It opened in 1979 when USAC Sprint Cars were red flagged for dust. Andy Chehowski enjoyed his first Sprint Car victory at Butler Motor Speedway in 1984, then died a day later at 131. Closed for a year, Martin was unable to unleash All Stars until hot laps had ripped grass from its groove. Bobby Allen and Wolfgang (Weikert 29) cashed big checks. Milwaukee’s Gerry Olson leased it for two nights of World of Outlaws in 1987. It disintegrated into a minefield of holes and rocks that eliminated all eight cars. Ted Johnson walked from motel door to motel door to tell his Outlaws to go home. US 131 never raced again. A faint trace of the half-mile oval can be seen beside its thriving drag strip.

Memphis (TN) Motorsports Park should have worked. After all, Memphis is as crazy about Sprint Cars as blues and barbeque. Gumbo has groomed heroes for the national tour since such a tour first simmered. Locals deserved a place to see those who had run off to the big leagues. But the half-mile high banks proved expensive to those accustomed to Riverside in West Memphis, AR. MMP demanded brute power, tires and new cars where concrete walls were involved. On the spectator side, the grandstand was embedded in a man-made knoll too low and inadequately angled to see the whole track without standing. It opened in 1987 one week before the World of Outlaws arrived. Ronnie Daniels (5) won more than Tony Armstrong, Lee Brewer, Rocky Hodges or Jeff Swindell. After three seasons, turns three and four were shortened by Howard Blankenship, owner of Mike Ward’s car. Ward won 19 MMP main events, second to Eddie Gallagher’s 34 victories. NCRA 410 Features went to Jerry Stone, Herrera and Estes Jr. Steve Kinser captured seven but Sammy nailed eight including the first Fram 65k. Dave Blaney rocked Memphis with the Outlaws and USA.

South along the Mississippi River from Memphis below a strand of casinos docked the Delta Bowl in Tunica, MS. It had a gambler’s longevity, pestered by police as plentiful as mosquitos. The start of Tunica’s second season in 2004 was scarred by the death of Sonny Sayre, again signaling bullring racers to danger. No one had died at The Ditch since 1976. Tunica tried Friday ASCS rules when Mike Ward (6), Zach Chappell, Tim Crawley, Travis Rilat, Darren Stewart, Shane Stewart and Wright showed the way. All Stars sanctioned Hooker Hood Classic split by Chad Kemenah and Jeff Shepard. The World of Outlaws drained Delta Bowl’s final applause for Hoyette Hodnett’s boy Greg when he and the Apple Chevrolet swept the whole weekend. Delta Bowl is an open sore that slot machines could heal tomorrow. Save the mosquito!

“Nothing is lost that can’t be found,” Earnhardt expresses in each episode. No one wants the list of shuttered tracks to grow. History, however, and urban sprawl say otherwise. “And nothing exists that can’t be cherished,” added Dale Jr. That is the moral of his show and this column because we should appreciate today’s tracks before those gates close forever.