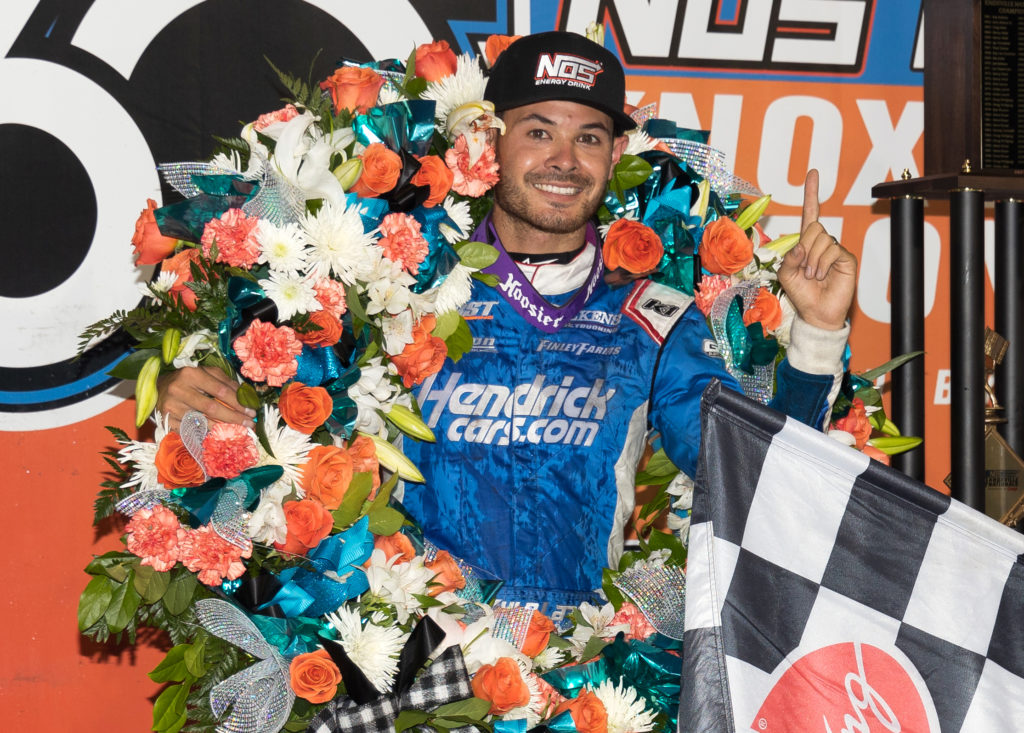 “All he does is catch touchdowns.” That was coach Buddy Ryan’s sarcastic dismissal of Cris Carter before Carter starred for someone else. Well, all that Kyle Larson does is catch checkered flags. Whether his demoralized pursuers are scattered across asphalt or dirt, oval or road course pressing eight cylinders or four does not matter one tiny bit.

Kyle Larson is the greatest driving talent to ever pull on a helmet. Change my mind if you dare. No one ever parachuted into somebody else’s sandbox to hand them their lunch as often or on such a scale as Elk Grove, California’s gift to motorsports. To call him the best since Tony Stewart or Jeff Gordon is almost insulting. Tony twice defeated the World of Outlaws; Gordon never did. No, he is measured against America’s absolute best: A.J Foyt, Mario Andretti and/or Parnelli Jones. They attained such status because of a shared propensity to excel outside their fields of expertise. Yes, it is senseless to compare eras because no one knows if Larson or Sammy Swindell would be as aggressive in more dangerous times. But athletes have evolved in every sport. Today’s ball players are bigger, stronger, faster, better conditioned and mentally prepared than their ancestors. Race drivers are no different. Reflexes are faster. They process more information. Steve Kinser never got to practice on a computer. A.J and Mario did some of the things that Larson does but once entrenched on premier circuits, they all but ceased risking life and limb on dirt tracks. Larson finds new hurdles. No one ever treated the World of Outlaws like a side hustle.

But enough about “NorCal Ninja” as Japanese blood first tagged him. This article is about the other California drivers to try the Knoxville Nationals. Kyle Larson is only the third one to win it in 60 years. Of course, it was three years ago that Kyle’s brother-in-law Brad Sweet did the deed. Before those Cycleland stars, one must peer clear back to 1971 when Jan Opperman’s check had a Pennsylvania postmark. Car owners have not fared much better. Dennis Roth did win the 1998 Nationals with Danny Lasoski, Keith Hylton bought a share of Dave Blaney’s victory, and the state’s former lieutenant governor Mike Curb owned a piece of Donny Schatz and Tony Stewart’s trophies. Kyle’s car owner/crew chief Paul Silva resides in rare air.

Golden State stars have been migrating to the Hawkeye State every summer since the second Knoxville Nationals of 1962. San Diego’s Dick Fries finished third in ’63 and again in ’65 when Billy Wilkerson was 11th. Innovative builder Don Edmunds was 10th in 1966. The 1967 Nationals were the first of eight that included Gary Patterson. Opperman almost won as a 1969 rookie, battling a flu that forced him to accept second. Jimmy Boyd arrived in 1970. “California Cowboy” Ron Rea recorded seventh as a 1974 rookie and won his prelim in 1976 when Jimmy Sills did debut.

When the World of Outlaws cast its first sanction on the 1978 Knoxville Nationals, the final feature included Ascot aces Buster Venard and Mike Shaw. Dean Thompson missed the cut in 1979 when Lee James peaked at ninth-place.

Tim Green was the favorite of Kyle’s father Mike Larson. Tim authored one of the greatest rookie campaigns in sprint history by leading the ’79 Knoxville Nationals then bagging the Western World Championship at Phoenix that occupied the second rung on that era’s ladder of prestige. Green and brother-in-law Sills scored fourth and sixth in the 1980 Nationals. San Diego’s Leonard Lee arrived in 1981. Leonard liked it so much that he eventually moved to Milo, Iowa.

When wings became permanent appendages in 1982, California began sending fewer folks from San Diego and more from Sacramento like Green and Sills, fourth and fifth in the 1983 Nationals. Dave Bradway Jr. enjoyed eighth in the 1985 Nationals that wrecked Chuck Gurney on the start. Brent Kaeding came to the first of his three Nationals in 1986. He never made the final but Randi Turner somehow did in 1988. Vallejo’s Jeff Gordon was a Hoosier when he missed the cut in 1987 and made the main in ’89.

Paul McMahan was a rookie to the 1992 Knoxville Nationals. He has appeared in 26 more (most of any Cali native) as recently as last week when a fiery accident finished Paul on prelim night. The Tennessee migrant had been in 21 finals. Steve Kent put Selma Shell on that grid in 1992.

Randy Hannagan made the 1994 Knoxville Nationals final as a rookie and the next two. He was the third Golden Stater to be Rookie of the Year after Duane Feduska (1980) and Gurney. The top rookie of 1996 was a western force named Tyler Walker. Brad Furr and Blake Robertson were rookies to the 1998 Nationals. Jason Meyers was the finest freshman of 2000 and finished eighth in 2001. Destiney Hays was the only California girl to strap in for Nationals in 2002 when Walker finished fifth. Roger Crockett competed in 2004 after moving from Northern California to Southern Oregon. Roger’s wrench was Paul Silva. Meyers settled for second in 2008 when Schatz broke Jason’s heart. Fourth in 2009 was the best of Tim Kaeding’s 21 Nationals. His brother Bud joined him for three of those but, like dad, did not make a final cut. Hannagan was still standing after 10 of 22 Nationals.

Janet and Mike Larson’s little boy was top rookie of the 2012 Nationals driving for David Abreu, father of Rico. Fourth in 2013 marked McMahan’s best. Paul’s brother Bobby McMahan tried three Nationals but never progressed beyond the C-main. Cracking the 2014 Knoxville Nationals final was a major step in mastering winged sprint cars as Bryan Clauson had done in everything he ever tried. Clauson was another Cali kid uprooted to Indiana as a child. Andy Gregg placed highest of any rookie in 2014.

California’s most unique Nationals distinction is held by Trevor Canales, crewman to Silva and Abreu in 2015. That was when Rico locked into the final then left town to race a NASCAR truck. Abreu Vineyards owned the spot so Canales took Ten Grand to start and park without one competitive lap.

Larson, Sweet and Abreu swept three of the Top Eight in 2017 when Gary Scelzi’s oldest son Dominic was deemed Rookie of the Year. A year later, Dom’s kid brother Giovanni Scelzi earned the same honor. Brad Sweet’s victory in the 2018 Nationals saw a full third of the final field from California in Larson, TK, Carson Macedo, Abreu, McMahan and both Scelzi brothers. Ten years after finishing fourth, Tim Kaeding matched it in 2019.

No natural disaster ever stopped the Knoxville Nationals until last year’s Covid crisis. Larson landed the replacement race but knew it was no Nationals win. There were no tears of joy in 2020 as Kyle shed in 2021. Larson wins so routinely that he rarely gets openly emotional about it. Knoxville put a lump in his throat. When he was a tiny ninja, Kyle just wanted to be “King of California” like Brent Kaeding. Now he’s bigger than that.