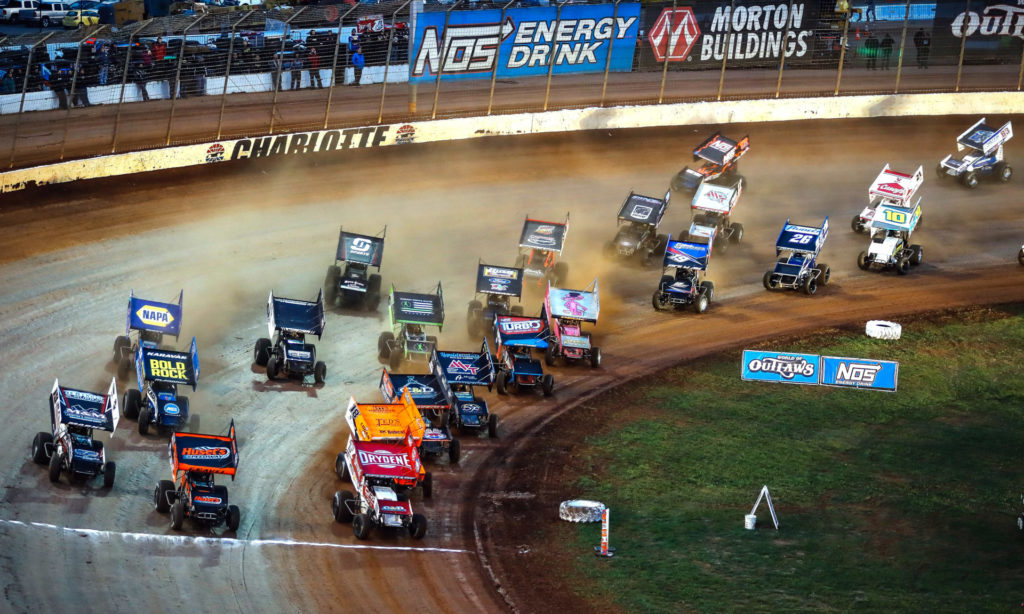 Nowhere to go but up. Quarantined by a world virus in 2020, the World of Outlaws of 2021 was an automatic improvement. Race dates grew by 25 percent. New York and New Jersey were back in play along with Washington, Illinois and southern splits of Louisiana, Mississippi and famous banks of Bristol, Tennessee. California did lose another spring swing but welcomed “The Greatest Show On Dirt” back to another Gold Cup by September.

A third straight championship by Brad Sweet was forged on 16 feature wins, or the match to his career-high from 2019. Second on the 2021 win list was David Gravel at 11 or seven less than his career year of 2017. By contrast, 11 wins by Carson Macedo almost tripled the four he posted in 2019. Macedo trophies included the 59th running of the Williams Grove National Open and first Tom Tarlton Classic honoring Carson’s extended family. Sheldon Haudenschild won eight times in 2021, one more than 2020. Logan Schuchart’s first Gold Cup and third Ted Johnson Classic were best among seven wins.

The exception to every rule, Kyle Larson’s World of Outlaws wins were reduced to four from a league-leading 12. Of course, two of those 2021 victories occurred at Kings Royal and Knoxville Nationals. Larson stood as a model citizen in 2021, signing with his circuit’s premier organization to net America’s richest title. Every time he won on asphalt or concrete, Sprint Car fans beamed with pride.

Kerry Madsen’s most productive season with the World of Outlaws was 2014 when he won six features. This year, the Iowa Aussie aligned with Tony Stewart Racing to ravage the Outlaws three times. Kerry beat the PA Posse at Port Royal and the first two nights of the 43rd annual Jackson Nationals.

Three wins with the World of Outlaws would reflect a fine career to a mere mortal, but for 10-time champ Donny Schatz, 2021 resulted in his fewest wins since 2002 as his team continues developing the Ford powerplant.

Brent Marks matched his victory output of 2018 by tripling at Eldora, Williams Grove and World Finals. The 2021 Brad Doty Classic was where Indiana’s Spencer Bayston and Sam McGhee joined the illustrious list of Outlaw winners. Series veteran Chad Clemens then hired Spencer to promptly win at Port Royal. The other first-time winner was All Star titleholder Tyler Courtney, another Hoosier who made the achievement pay $175k.

Giovanni Scelzi’s first Outlaw victory also happened at The Grove in 2018. Gio and Indy Race Parts repeated the feat at Charlotte in 2019. This year, Scelzi teamed with Jeff Nehring and Matt Barbara of Iowa to conquer Kansas City.

At age 59, Dave Blaney authored the “feel good” story of the 2021 World of Outlaws campaign by ending a 24-year absence from victory lane at his very own Sharon Speedway.

Third-place was the 2021 series-best by Jacob Allen, Cory Eliason, Anthony Macri, Justin Peck and Daryn Pittman. Eliason and Roth beat The Outlaws twice in 2018; Jake found the promised land in Dodge City in 2020; and Daryn is one of only ten club champions. Macri was second at Port Royal in 2019 before taking third twice within one week of 2021. Peck’s performance at Kokomo for series winner Tom Buch far exceeded Justin’s ninth-place from the 2020 World Finals.

Finishing fourth against 2021 World of Outlaws artillery was the best that Bill Balog, Ayrton Gennetten, Shane Golobic, Justin Henderson, Michael “Buddy” Kofoid, Ian Madsen or Hunter Schuerenberg could muster. Shane and Ian own a collective six series victories. Henderson hit the whole tour for Dan Oswalt in 2007 when they peaked third at Manzanita and Cedar Lake. Eight years passed before Justin improved to second to Donny Schatz at Knoxville. Hunter had been second to Gravel at Haubstadt in 2018. “North Pole Nightmare” Balog was third at Burlington in 2014 and Nashville in 2019.

Outlaws have occupied a small slice of Kofoid’s calendars. He cracked eight features in three years for Doug Rutz, Dan Simpson, Ed Neumeister, and USAC Midget boss Keith Kunz. Fifth at Chico was Buddy’s best until he combined with Kevin Swindell at Lawrenceburg. In a most sincere compliment, Kofoid captured the Trophy Cup for Paul Silva when Kyle Larson was unavailable.

Anyone named Ayrton is destined to drive race cars. Inspired by Formula One, Steve Gennetten named his son after Ayrton Senna. Steve was the offspring of Gene Gennetten, who scored sixth at Sedalia during the inaugural World of Outlaws season of 1978. After following dad to midget glory, Steve made his Outlaw debut at Eagle in 1990. Ten years later, he joined Jerry Smith for three more series starts. Neither father nor grandfather were ever as strong against The Outlaws as Ayrton during the Ted Johnson Classic of 2021.

Fifth was the highest finish in the 2021 World of Outlaws by Rico Abreu, Kasey Kahne, Paul McMahan or Jason Sides. All are series winners with the ironic exception of Kahne, a four-time champ as car owner no better than fifth at Eldora in 2002 or Gold Cup 2021.

Sixth-place was as good as Parker Price Miller, Ryan Robinson, Dominic Scelzi or Danny Varin could cross during 2021 club business. PPM owns Outlaw wins at Haubstadt 2017 and Burlington 2020 while Dom was third at Chico 2017 and Rapid City 2018. Robinson and Varin however, had never finished so well. Ryan’s father David missed the grid of three Gold Cups before his son went to Texas with Keith Kunz in 2018. Varin reached Top Six status in only his second series A-main.

Wayne Johnson, Tim Kaeding, Freddie Rahmer and Lucas Wolfe were seventh-place finishers on the 2021 Outlaw campaign. All except Johnson are series winners. Wayne made his first Outlaw feature in 1991 at his hometown Oklahoma City Fairgrounds. Fifth on the Missouri State Fairgrounds in 2010 remains Johnson’s finest. Eighth was best for Kyle Hirst, Tim Shaffer, Carson Short and Scotty Thiel in 2021. All are series winners excluding Thiel, who peaked eighth at Nashville in 2019.

Ninth-place was the fattest paycheck that Christopher Bell, Mark Dobmeier, Cap Henry, Jason Solwold, Trey Starks or Logan Wagner withdrew from the World of Outlaws in 2021. Bell, Solwold and Dobmeier have combined to whip The Outlaws a dozen times. Starks stunned all 2019 Knoxville Nationals preliminary pursuit after crossing sixth at The Grove in 2018. Cap and Logan slightly improved from previous tenth-place runs. Wagner’s father Mike Wagner was never better than 11th in the premier series.

Times have certainly changed when 10th-place represents the best World of Outlaws evenings by Sammy Swindell or Joey Saldana but both reside in semi-retirement. Craig Mintz and T.J Stutts topped out 10th in 2021 though both had reached second at The Grove in 2007 and Attica in 2014. Queensland’s young Mr. McHugh notched 10th at Lawrenceburg in his first feature then missed the cut of his next five.

Some racers wait decades to be counted among the Top 10 of any World of Outlaws Feature. Others spend their entire careers proving how elusive such evenings can be.

MOVIN’ ON UP: Significant Victories Alter World of Outlaws All-Time Wins List in 2021