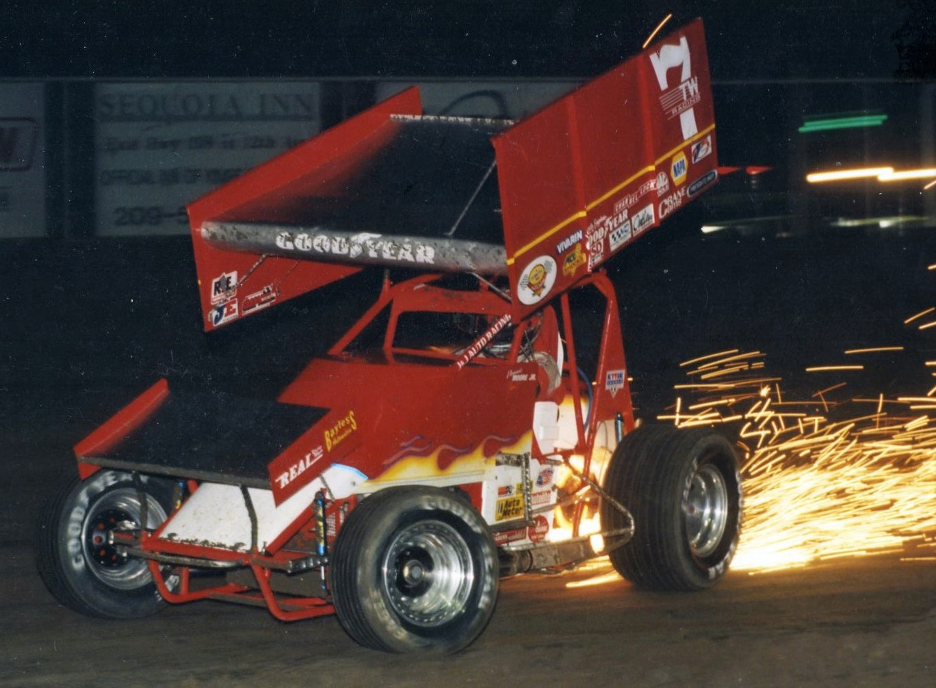 Halfway to Indianapolis from Fort Wayne is Fairmount, IN. It is an Indiana town like countless Indiana towns, home to fewer than 3000 folks and more churches than stoplights. Yet seven decades ago, the tiny town became “The Birthplace of Cool” because James Dean lived there. The iconic “Rebel Without a Cause” was born in Marion, uprooted to Santa Monica, shipped back to Fairmount High’s graduating class of 1949 then enrolled at UCLA until he quit to become the biggest movie star of 1956. Unfortunately, he died in 1955 aboard a Porsche 550 Spyder that spit its crew chief en route to the Salinas Road Race. Rolf Wutherich survived.

It was 1986 when TW Transport joined Jarrett Farms as USAC sponsors to Elwood’s George Toney, who counted club champions Tom Bigelow and Larry Rice as drivers. Wimmer wanted his own car and took Gambler’s new “coat hanger” design to Florida for Johnny Mackison Jr. Rice ran it at Eldora until Tom hired Rick Ungar, an Ohio journeyman by way of Memphis and St. Louis. They were the first winners of USAC’s winged option, dusted All Stars at Atomic and won without sanction at Wilmot and Bloomington. The TW Gambler was also the only car to crack the 1987 Knoxville Nationals final with a steel engine on McCreary rubber.

Ungar and Bobby Allen rarely arrived by rig. Rick preferred to rent roomy cars in which Bob often rode. Hours of highway revelations caused Ungar to insist that Bob build the next 7tw. Allen refused. As a backhanded compliment, Bob confessed that Rick ran the low lane almost as well as Allen and to narrow that edge would be unwise. Wimmer instead ordered an OzCar, hired Davey Whitworth and mounted Hoosier tread “when they were the third-best tire in a three-tire race” according to Ungar. They struggled against Florida All Stars and Texas Outlaws before Rick was surprised to see an ‘88 Gambler without warning. No one asked Ungar because the new car had Joe Gaerte’s name on it.

Earl Gaerte’s nearsighted son was destined for the World of Outlaws before “Jose” had graduated from Rochester High School. Dad’s house of horsepower hoarded the first eight series titles under Steve Kinser and Sammy Swindell’s boot. Joe was 16 when he stepped into Sprints On Dirt around Great Lake states. By age 21, he was king of the All Stars then won another. Outlaws were the logical progression but funding it alone struck Earl as illogical to create his merger with TW Transport. Would Wimmer put Joe on the national tour if given Gaerte Engines? Tom’s answer netted the 1989 rookie of the year award.

Wimmer’s trade for Gaerte Engines may have been the first time that a sprint car ride was purchased. But the flip side of that token showed how children of privilege are not necessarily born with no talent. Joe Gaerte sharpened his claws. It happens to every Outlaw: sink or swim. Learn to not lift. Take every inch because the driver alongside will slice your throat to transfer. Joe took his lumps, winning one of 94. Gaerte’s sophomore season was better. He bagged three of 97 (Kokomo’s celebration was 60 miles from home) and more points than everyone except Doug Wolfgang and The King, Steve Kinser. When plums were ripest, Gaerte finished fourth at Kings Royal, Gold Cup and Fram Dash. The biggest win of Joe’s career was the 1991 Gold Cup that paid $13,500. But he won only one more and was released in favor of Ohio’s Kenny Jacobs, who debuted seventh at Little Rock’s Short Track Nationals then fifth on Kansas City asphalt.

The 1992 World of Outlaws campaign with Jacobs was when TW became Two Winners. Wimmer and Kramer were co-owners to Kenny’s first national assault. They began tenth in Florida’s Suncoast Dome and second to The King in Mexico’s only Outlaw visit, then topped Topeka in Kenny’s first official series win. Labor Day found Jacobs replaced by Dale Blaney but Dale was cut before the 1993 opener. Bob and Tom’s new shoe was 1989 champ Bobby Davis Jr. He went nowhere fast. Before the tour touched New York, Davis was dropped in favor of Memphis neighbor Jeff Swindell. In their fifth collaboration, Swindell turned Two Winners into Lebanon Valley victors. He raced out of Fairmount for seven years. Before accepting the job, Jeff was committed to the USAC Silver Crown circuit and remained at Hoosier Hundred and Eldora Four Crown while T-Dub subs Terry McCarl and Jimmy Sills filled in at San Jose and Knoxville. Terry was tenth; Jimmy clobbered the fence so hard that he awoke with no memory of it.

Many milestones were struck by Indiana’s three-headed serpent. Jeff won three on TV then nine point races. Two Winners put all three in the Top Ten on 20 occasions. Calistoga’s three nights were best because Gaerte got his one win before Jeff (14k), Joe and Greg ended first, third and sixth. Hodnett’s heroic Nationals climbed from C-main cellar to join teammates in the final. Two Winners claimed three of the nine largest slices of banquet cake. Joe’s second stint with Wimmer ended when he accepted Al Hamilton’s offer. Swindell and Hodnett held keys to the castle. Greg went from his first World Series victory in South Australia to hit Florida in full stride. Hodnett had Top Tens in the first nine nights of the season spiked by Greg’s first series success at Houston’s Battleground Speedway where Jeff also enjoyed two of his four. Two Winners put two in the Top Ten on 48 of 99 programs. Seven races saw Swindell and Greg grace the Top Five such as Kokomo and LaSalle when Jeff was second and Greg finished fifth.

LaSalle Speedway displayed Bob Kramer’s clout. He gathered about 125 employees of the Gold Eagle factory in Chicago to see “The Greatest Show On Dirt” at Santa Fe Speedway on 91st Street. Howard Tiedt’s tight confines in Hinsdale was unpopular among Outlaws because Santa Fe meant toll road gridlock, expensive motels, mufflers and rocks. Lots of rocks. Trailer ramps were closed to keep stones from ricocheting inside. Tiedt was too cranky to accommodate corporate guests, causing Kramer more than a little embarrassment. Ted Johnson agreed that LaSalle would be a finer Chicago showcase and erased Hinsdale from his 1994 agenda. Santa Fe closed for good one year later.

Two Winners trimmed to one in 1996. Swindell won five with the World of Outlaws with $12,500 in Milwaukee and 20k at Gold Cup as Jeff’s richest rewards. Top Fives numbered 37 of 89 to match a personal-best of fourth in points. For their next bold stroke, Wimmer and Kramer converted from Chevrolet to Ford. To mirror Dave Blaney’s championship form also caused Swindell to switch from Maxims to J&J. It turned into a minor disaster. Factory support was slow. Casey Luna’s old Fords were patched by Ron Shaver. Scott Bloomquist ruled late models with Fords by Cornett so Two Winners sampled Kentucky horses. Two units won in Vegas but lost all 94 events between Sin City trips. The following season was worse. Swindell suffered 92 losses until Vegas again ended the dry spell. It was too late to save a seven-year marriage. Lacking sufficient sponsorship, Car 104 reverted to “7tw” under Iowa prankster Dennis Moore Jr. until DMJ tasted concrete to flirt with nurses in Nevada.

The World Challenge was an international invitational to Americans who raced in Australia and vice versa. The race occured on Nationals eve backed by Roger Johnson of Kele & Associates, which sponsored Hodnett for Two Winners. Bob Kramer’s energetic son J.D wanted Trevor Green on that grid so he sold Bob and Tom on enough parts for three weeks at Knoxville prior to that second World Challenge. Green brothers Steven and Darrell helped Kramer organize one-ticket tours of their country. His time Down Under brought J.D to computer gamers eager to expand his idea of sprint car simulation. College educated in Muncie (“I’d rather Ball U. than I.U”) J.D had a business mind in a thrill seeker’s shell. When dad was done being car owner, J.D pieced together a Maxim that he raced at Gas City, Lincoln Park, Kokomo, Bloomington and Lawrenceburg until Paragon bent it permanently.

Two Winners were finished before 2000 really began but second and third-generation Kramers and Wimmers would impact the series when J.D Kramer and Brandon Wimmer chose Talladega for Outlaw entrances. Tom’s grandson emerged as the top 410 rookie of 2002 as voted by the National Sprint Car Poll. Wimmer was a winner at Kokomo and Zanesville and joined “Outlaws Down Under” orchestrated in Sydney by Steven Green for Brian Healey. When the tour touched LaSalle, Brandon broke its track record. Tom Wimmer funded four seasons before grandson got hired by Rick Ferkel and David Key Trucking of California. He joined Dennis Roth in 2007 when their immediate success at the Dirt Cup shocked fans of no fewer than three countries.

No team would join today’s World of Outlaws without a T-shirt wagon. No team could contain three crew chief egos. No team would run 100 races, times three. Kasey Kahne came close but even Kahne partnered with Roth on his third entry. Two Winners went fast yet died before its time, just like James Dean.