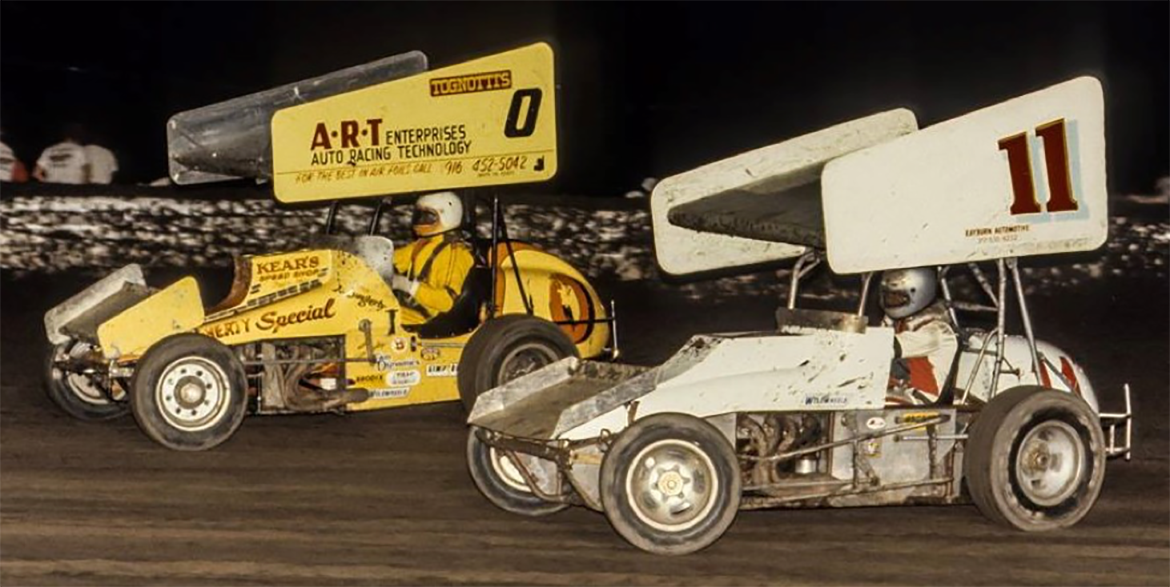 Don was drummer and legendary lyricist of The Eagles hatched in West Hollywood. Henley of Texas and Glenn Frey from Michigan saw California as the Land of Opportunity. It helped to be genius. The first song was “Desperado!” California started American cinema, car culture, counterculture, fast food, and whatever wireless device delivers these words.

California can make a case as the origin of American auto racing. Organized drag racing certainly started there. Legion Ascot played to 10,000 people in 1930. Midget cars raced for 55,000 folks in Los Angeles Memorial Coliseum in 1946. Virtually every Indianapolis 500 champ car was chalked on the concrete of L.A shops like Glendale’s A.J Watson, who first built trailers to tote roadsters to dry lakes for straight speed runs. Hot rod kids wanted to turn left so Carrell Speedway was built for the California Roadster Association (CRA). Roadsters slimmed to sprints and the CRA changed to the California Racing Association in 1958 after Carrell was leveled for Ascot Park in Gardena.

When the World of Outlaws began in 1978, the CRA was the country’s oldest sprint car club. It based its schedule with Ascot’s J.C Agajanian, flamboyant promoter of everything from Evel Knievel to his own sprints and Watson that won Indy in 1963 piloted by Parnelli Jones. The biggest sprint productions of Aggie’s 12 months were Summer Nationals and Pacific Coast Nationals, an autumn classic that he shifted to the Sacramento mile in 1968-71.

Summer Nationals 1978 became the fourth stop in World of Outlaws history. Ascot also created the first conflict on Ted Johnson’s fresh schedule when the only criteria was to pay winners at least $2,000. Ascot and Calistoga paid out on the same night. Rick Ferkel went north to sweep Calistoga and Sacramento, where Buckeye Traveler was joined by Summer Nationals winner Lealand McSpadden, Steve Kinser, Doug Wolfgang, Gary Patterson and Charlie Swartz, all of whom pulled 400 miles overnight on the way to Washington for Dirt Cup. Ferkel was favored to be the first King of the Outlaws in cars built by Tognotti Auto World in Sacramento.

Boyd was a revolutionary who returned from Central PA in 1973 with a Charlie Lloyd sprint car that shattered West Capital’s track record and obliterated the Gold Cup Race of Champions that began in 1951. Jimmy enjoyed $2,200, but when it jumped to $5,000 in 1975 Jan Opperman, Buckeye Traveler and 6,237 spectators appeared.

Indiana’s Steve Kinser came to see the Gold Cup as a rich 50-lap run around quarter-miles like those that made him strong. Steve and Karl Kinser won the first two Gold Cups they saw and the first three Chico checkereds ever offered, though none were Gold Cup until 1983. They stacked six more as a duo, split after 1994, and added four more from separate camps. One amazing chapter was 1986 when Steve flipped in his heat race, was fixed well enough to transfer through the B, then won prelim with Gambler so damaged that Karl left it alongside his hotel dumpster.

First and second in two looks at West Capital in 1976-77, Sammy Swindell took to California like a duck to water, winning five straight from Fremont to 1981 Gold Cup and the series debut at Santa Maria. Wolfgang won Baylands and Gold Cup in ‘82. Club returned to San Jose in ‘83 and added Petaluma in ‘84-85. The 1985 West Coast World of Outlaws tour was the first to include Placerville or Hanford, the first to wear wings at Ascot, and the first Gold Cup success by Danny Smith or Larry Trigueiro, wizard of Madera asphalt.

California is certainly to blame for choking high performance engines with noise suppressors. To keep sprint cars quiet became witchcraft. No one offered absolute solutions. No track handed out one approved brand. Teams could choose any model of muffler but were limited to two chances per program. The first offense brought a warning. “Take some baffles out,” rookie Rich Bubak was advised. The second offense ended the evening. Bubak walked to Silver Dollar infield and casually snipped wires to the noise monitor.

February 1986 at Hanford became the first Outlaw win ever stripped. Sammy Swindell had guts knocked from left side muffler that faced the meter. The Golden State rule allowed no more than 95 decibels from 100 feet away. Too loud. Sam was black-flagged. Brad Doty was declared the winner. Swindell returned with a 1986.5 Challenge Chassis that conquered Kings, Baylands, P-Ville and Santa Maria. Racing in the Road America undercard, Sammy was late to Gold Cup, started last, won the E, won the D, then crashed from the C-main.

Bobby Allen elicited a roar from the San Jose grandstand for a last corner pass of Brent Kaeding, son of the supermod stud who won 16 Saturdays straight in 1973. The King’s conquest at San Jose was the first by the“downtube” chassis that remains the standard. Wolfgang’s win at Calistoga marked the first Golden State success by Weikert Livestock, eastern equivalent to Beef Packers of Fresno.

Darrell Hanestad, the first to drive Daryl Saucier Nance on the 1987 World of Outlaws trail, topped the Outlaws at Baylands in the Ford of Brock Robertson, soon to make 1992 Knoxville Nationals rookie of son Blake. Gold Cup 1989 was four days late due to rain but did not dampen the biggest victory of Hanestad’s career.

NorCal was where Art Mailes built a wooden Jeep to journey with the Northern Auto Racing Club and the World of Outlaws beginning in 1989. Nights of waiting on a push ended because husband and wife were on cars almost before they stopped. The minutes “Workin’ Woody” shaved from programs or rescued rigs from mud or provided engine hoist cannot be measured. Art and Carol were Outlaws for 20 years before son Eric carried on for two more.

San Jose screamed again when Kaeding won for Bob Miller, owner of sprints, midgets and champ cars. Santa Maria 1989 was shared by brothers-in-law Green and Sills, who drove for Danell-DeHart Farms of Fresno that enabled Steve Kent to dethrone Brent as 1987 King of California. Chuck Miller began in San Jose supers before teaming with Selma’s Don Berry to be World of Outlaws winners in Arizona and prelim princes of Gold Cup 1990.

Agajanian Enterprises unloaded Ascot after Thanksgiving 1990 and opened 1991 World of Outlaws business with the only club dates ever in El Centro or Arizona border town of Yuma. The Valvoline vehicle of Kinser won both. New York’s Craig Keel earned a share of San Jose in his only Outlaw victory.

Mini Gold Cup 1991 saw BK use maximum offset and maximum stagger to crush the Outlaws on ultra heavy Silver Dollar dirt. No one from Oregon ever defeated the World of Outlaws until Greg Brown took prelim to 1991 Gold Cup won by Joe Gaerte. Stevie Smith brought the famous Al Hamilton 77 to win circles at Kings, San Jose and Calistoga in 1992 then added Santa Maria and Gold Cup in 1993. Wild Child won San Jose for Luna and Woodruff.

Weary of wet weather, Ted Johnson declined to open the 1993-96 World of Outlaws seasons on the West Coast, reducing the tour to one Cali commute. When the Perris Auto Speedway opened in 1996, the Outlaws restored the spring tour. Perris needed eight World of Outlaws dates to declare a winner other than Mark Kinser.

San Jose’s Randy Hannagan handled the Gold Cup prelim then joined the Outlaws full-time in 1994. This snide magazine commentary predicted “Hurricane Hannagan” home by Memorial Day. Randy never did come home to stay, raising a family in Indiana and championship banners in Ohio. He showed me.

Hanford 1996 was when program salesman John Gibson became the series announcer. After 22 years of perfect attendance, GibVoice is the sound of the series.

Jac “Wild Child” Haudenschild was never more wild than at Silver Dollar, like the first Mini Gold Cup when Haud was so far ahead that he sailed off turn three yet never lost the lead. Haud led the 1995 Gold Cup until back chute scooter sent him into observers in a tragedy that snuffed Sy Lamb, owner of Gerry Ponzo’s sprint car. Gold Cup rookie of 1979, Jac ultimately sacked that classic in ‘98-99.

Santa Maria’s 1999 win by Jason Statler was one of the biggest upsets in club history right alongside Bill Brian Jr. at Lincoln or Travis Jacobson at Skagit. Statler tackled the Outlaws as the 1990 San Jose rookie yet had posted zero World of Outlaws Top Tens prior to that win.

Minnesota’s Guy Forbrook first conquered California at San Jose with Lasoski (1990) and Wild Child in a wild P-Ville program of ‘92. Guy got the Gold Cup prelim and two wins at ‘Stoga with Maryland’s Jeff Shepard. Brad Furr won at Ocean in 2002 and became a Friday regular upon quitting the road. The King took the Gold Cups of 2002-03 and the first visit to Tulare Thunderbowl.

Tim Kaeding and Rodney Tiner topped the 2002 Silver Dollar prelim and 2003 opener at Kings for Terry Cowan. Rod’s brother Randy was 1998 Chico prelim ace in a car that Rod owned and built. Gold Cup frames arrive on Tiner’s operating table to be untwisted by Dr. Frankenstein of Rio Linda. Hillenburg tried to hire Rodney for years, but Tiner roots run deep in NorCal.

Four feet of dynamite named Rico Abreu burst on the scene in 2011. Leasing like Larson before him, Kaeding Performance modified Maxim by moving the seat, steering and pedals up and back. Rico’s first sprint circuits were Hanford hot laps when he drove by Donny Schatz for few seconds. Early in his fourth and fifth seasons, Abreu beat the Outlaws at Thunder Bowl.

Logan Schuchart’s victory at Kings in 2017 was Bobby Allen’s first in 31 Golden State seasons. Schuchart schooled in karts at Hunterstown like World of Outlaws winners Stevie Smith and Cris Eash.

Gold Cup 2017 was triumphantly ushered by Kyle Hirst, son of the third-place finisher of 1988 and 1990 Gold Cups. Larson won his third Gold Cup as co-owner behind Stewart of Oklahoma.

Texan Aaron Reutzel was introduced to California by Dennis Roth at Tulare, where he beat the World of Outlaws to start 2018. Aaron again opened 2019 with an Outlaw victory at Perris. Roth recorded 2018 wins at Stockton and Calistoga with Eliason. Sweet and Abreu swept Gold Cup 2018 before Brad added his own P-Ville promotion.

Jac’s son Sheldon Haudenschild handled Bakersfield in 2019 as second father and son winners of Golden State World of Outlaws races after Brent and Tim Kaeding. Ian Madsen mastered Tulare 2019 to be the second brother act to win World of Outlaws races in Cali after Sammy and Jeff Swindell. Larson hired Macedo, and he clicked at Chico instantly.

“Pastures of Plenty” was a 1941 song by Woody Guthrie extolling virtues of vegetables, fruits and nuts bountiful in the Golden State. Name any such crop and California has towns so dependent on its harvest that the plant is celebrated by festival. It continues to export food, technology and fiercely talented racers.

Traveling teams enjoyed great road tunes from Henley and Frey: Take It To the Limit, Already Gone, Life In the Fast Lane, etc. But the Desperado cassette by The Eagles gave them a theme song.

“I am an outlaw,” Frey sang. “I was born an outlaw’s son. The highway is my legacy. On the highway I will run. Woman don’t try to love me. Don’t try to understand. A life upon the road is the life of an Outlaw Man.”