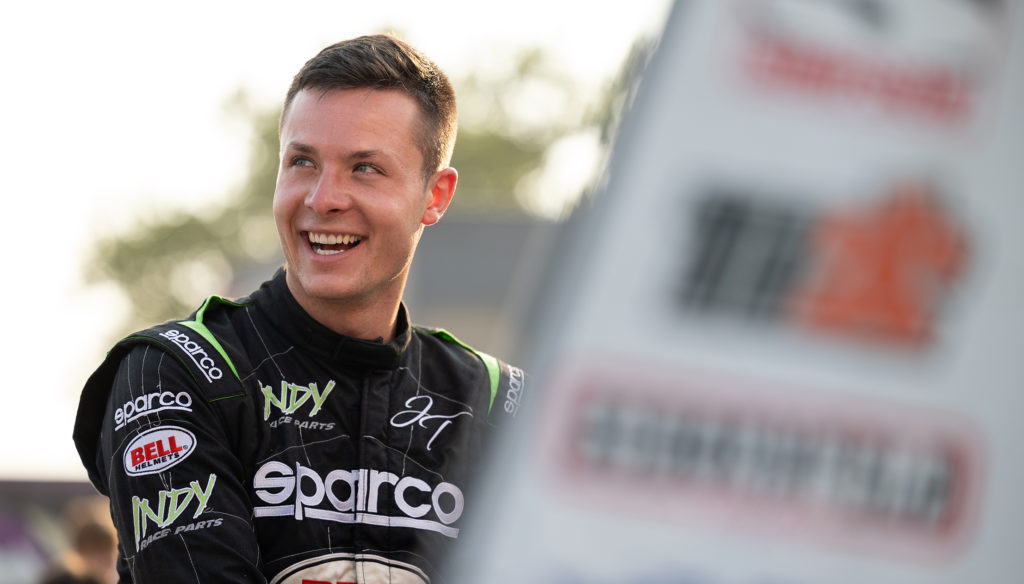 It’s only September, but the first candidate for the 2022 Kevin Gobrecht Rookie of the Year Award has already surfaced, and his name is Spencer Bayston.

The 23-year-old native of Lebanon, IN will join forces with CJB Motorsports in his first attempt at the World of Outlaws NOS Energy Drink Sprint Car Series championship next year. It marks the fulfillment of a childhood dream and revitalizes a career he had thought was once lost.

Already preparing for 2022, Bayston & CJB will officially begin the partnership this weekend as they finish out the remaining nine races of the 2021 season in an effort to build chemistry before hitting it hard when February’s DIRTcar Nationals rolls around.

For Bayston, this great news is the latest in an unexpected whirlwind of a season.

“This industry, as well all know, things can change very quickly,” Bayston spoke about his year. “Fortunately for me, it’s changed in the right direction. This time last year I was kind of content and happy with a part-time job at home and racing here and there to get my fix in and have some fun. Now I’m looking up and I’m going full-time with the Outlaws.”

“A lot of that is credited to the McGhee’s and the opportunity they gave me,” he continued on his recent car owner. “Working with Kevin Osmolski and Sam McGhee was a turning point in my career, and I’m forever thankful. Excited to see how we can perform with Barry and the CJB guys to end this year before really going hard next year.”

No stranger to success with The Greatest Show on Dirt, Bayston’s 2022 news comes following a monumental 2021 season. His greatest moment you may recall came at Attica Raceway Park’s Brad Doty Classic in July when the budding star held off reigning World of Outlaws champion Brad Sweet for his first-career win.

At the time of his announcement, Bayston has collected 50 starts, 10 top-10 finishes, and four top-five results to go along with his one-career victory in the NOS Energy Drink Sprint Car Series.

The former USAC National Midget champion most notably split his Outlaw starts the Swindell Speedlab #39, the Indy Race Parts #71, and some part-time action in Pete Grove’s #70 before he linked up with the Sam McGhee #11 this year.

“This has been a deal where Barry and I have actually been talking for the last couple of years to try and eventually get to the point where we could work together more often,” Bayston explained. “We came to Eldora in May with the #5 and it was going to turn into more than that, but my deal with the McGhee’s came up and I had to take that.”

For CJB, this move returns the Carlisle, PA-based establishment to platinum status with the World of Outlaws after a two-year absence since last running full-time with Shane Stewart in 2019. The team most notably fielded the #5 for David Gravel from 2016-18, collecting 32 wins together and never finishing off the championship podium.

“We felt like this was the right move to get our program back to where it needs to be,” explained crew chief Barry Jackson. “In talking with our team and partners, we felt like this was what was needed to restore our team to a winning, championship caliber organization. We believe that Spencer is one of the best up and coming drivers in the sport. We’re excited to see how he can grow and learn while being on the tour. In many ways, we feel like he is a driver on the cusp of great things, much like David was when he came to race for us.”

“I know it’ll be a growing year and there’s a lot of work to do, but this team has all the right tools and is capable of getting the job,” Bayston continued. “We all understand this is going to be a building process. There will be some changes over the off-season to get this program back to where it deserves to be.”

Luckily for Bayston and CJB, that building process gets a head start by finishing the 2021 season together. The nine-race Outlaws schedule includes the National Open at Williams Grove this weekend, two nights at Port Royal (Oct. 8-9), one-stop at Lakeside Speedway (Oct. 22), a weekend at Lawton (Oct. 29) and Devil’s Bowl (Oct. 30), and then the season-ending World Finals in Charlotte (Nov. 4-6).

“The main goal this year is to get to know each other and build that team chemistry in preparation to hit it hard next year,” Bayston mentioned.

If you can’t make it to the track, you can watch every World of Outlaws event live on DIRTVision – either online or through the DIRTVision App.