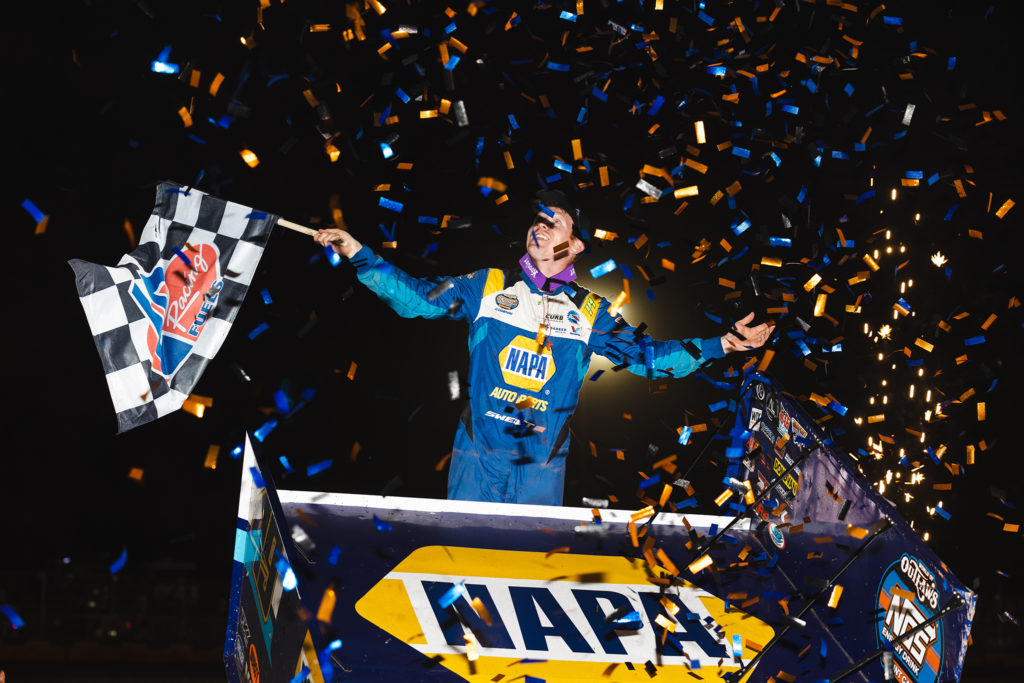 Lately, there seems to be three certainties in life: death, taxes, and Brad Sweet winning at Cedar Lake Speedway.

Pouncing on the green-white-checkered restart, The Big Cat played Carson Macedo like a fiddle and slid by his fellow Californian to steal the win from the Jason Johnson Racing #41, which commanded the first 33 of 35 laps.

It’s his 69th career victory and the 11th of his dominant 2021 season, which extends his advantage in the point standings with a third-straight championship on the line for the Kasey Kahne Racing, NAPA Auto Parts #49.

“I thought we had a pretty equal car to be honest,” Sweet said of Macedo. “He did a great job in lap traffic and had us covered there. I knew there was a little moisture down low, so I was surprised to see he stayed up high on the restart. It was just a timing thing, I had to let him be ahead at the cone, but got as close as I could. I think he knew he spun the tires and went into protect mode, but I went into attack mode and it worked out.”

After racing through the first 33 laps, Macedo had survived several challenges from Sweet on restarts and throughout multiple stages of lap traffic to prove his might as race leader. The pole sitter was poised for a flag-to-flag score until top-five running Logan Schuchart and David Gravel both suffered flat tires to bring out the caution.

On the ensuing restart with two-to-go, school was in session.

Macedo swung high, but Sweet stuck it low. The rules say you can’t pass before the cone at the start-finish line, and Sweet played by them, but he surely timed it perfect and got as close as possible to the back of the #41.

Shooting to the high side of turns one and two, Sweet built his momentum and charged his #49 down the backstretch with a full head of steam. Into turn three, he launched a slider and tip-toed to the cushion as he cleared Macedo out of turn four and saw the white flag waving.

The Grass Valley, CA native handled his business on the 35th and final circuit, cruising away from Macedo and crossing the checkered flag with a 0.895-second margin of victory.

His 11th victory of the season combined with Gravel’s misfortune means his points advantage has ballooned to 84 points over the Big Game Motorsports #2 as we hit the halfway point of the 80+ race season.

It’s Sweet’s fourth consecutive win at Cedar Lake, and his fifth win over the last seven races. He’s now tied with Donny Schatz (5 wins) for second on the wins list through 46 World of Outlaws appearances at the Wisconsin 3/8-mile.

“Cedar Lake is always special to us,” Sweet spoke on his successes. “We love this race track and all of the fan sup here. We’ve got a good setup and this place just fits my driving style. There’s always multiple lanes to race on and that plays into my hand. Hopefully we can keep the streak alive tomorrow night.”

After controlling 94% (33/35 laps) of Friday’s Feature, Carson Macedo was forced to settle for a second-place finish. That makes it five runner-up results for the Jason Johnson Racing #41, which resides third in the championship standings.

“I feel bad for my team,” Macedo admitted. “I think we had the car to win. I feel like I was making good decisions up until that point. I just spun my tires on that restart and it killed us. I saw Brad peeled off and I tried to block, but he threw the slider and cleared me. It sucks, but we’ll come back and try to get that win tomorrow.”

Concluding the podium was Aaron Reutzel, who quickly found success in his first-ever visit to Cedar Lake Speedway. A third-place finish is the eighth podium of the season for Roth Motorsports and their Kevin Gobrecht Rookie of the Year contender.

“We unloaded and we were decent from the beginning.” Reutzel offered. “The curb went to the fence and that’s where I’m good. We made the right adjustments, but I wish I would’ve gotten to my wing quicker. I probably wasted 10 laps or os before we got right there with them.”

Finishing fifth for the first time in nearly four years was Double Down Jason Sides in the King Racing Products, Wetherington Tractor Service #7S. It’s his 170th career top-five finish, however, it’s his first since July 8, 2017 at Cedar Lake. His popular run ends a streak of more than 200+ races since “J” last recorded a result that good.

Closing out the top-ten on Friday night was Parker Price-Miller in Guy Forbrook’s #5, Donny Schatz in the Tony Stewart/Curb-Agajanian Racing #15, James McFadden in the Kasey Kahne Racing #9, Giovanni Scelzi in the KCP Racing #18, and Brock Zearfoss with 19th-to-1oth run worthy of the KSE Racing Hard Charger Award.

UP NEXT: The Independence Day Spectacular at Cedar Lake Speedway concludes tomorrow on Saturday, July 3. After that, the World of Outlaws NOS Energy Drink Sprint Car Series will remain in Wisconsin for a date at Wilmot Raceway next Saturday, July 10.

WHAT TO WATCH FOR: “Month of Money” Pits Outlaws vs. Posse This Week