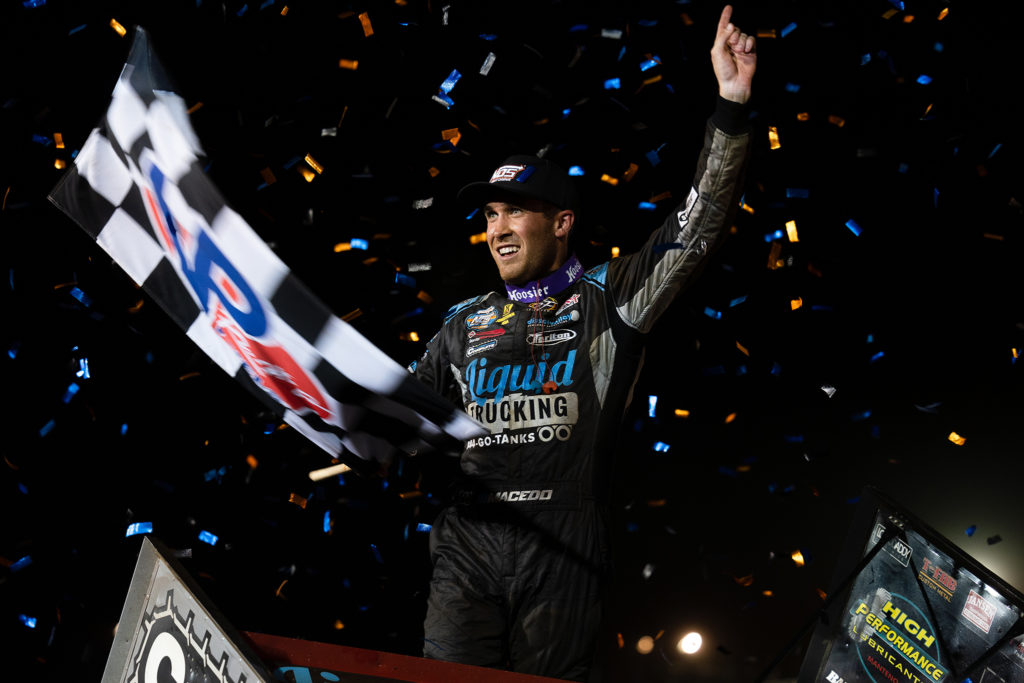 The 2021 edition concluded on Saturday night at Williams Grove Speedway with endless storylines in play. Schatz chasing a seventh title, Larson after the triple crown, Marks on the pole for the Posse, Schuchart trying to equal grandpa in grandpa’s own throwback, and yet none of them came to fruition.

Instead, Lemoore, CA’s Carson Macedo gladly played spoiler and collected the biggest win of his life at the Mechanicsburg, PA 1/2-mile. To be exact, the 25-year-old banked a cool $75,000 for his incredible efforts aboard the Jason Johnson Racing #41.

It was as hotly contested as any National Open in recent memory, offering three different leaders and a race that came down to the very final corner on the 40th and last lap.

Myerstown’s Brent Marks controlled the first 12 laps before spinning in traffic, and then Schuchart took the point. He led the next 23 circuits aboard the Shark Racing #1S, but then came charging sixth-starting Macedo. The #41 slid by coming to the 35th lap and survived a sprint to the checkered flag as Schuchart nearly got him back at the end.

The win is Macedo’s 10th of the season, and arguably the most rewarding of his 16 career World of Outlaws NOS Energy Drink Sprint Car Series wins.

“Wow, this is the highest-paying win of my career,” Macedo said in awe. “You know I left so frustrated the first few times I came to Williams Grove because I couldn’t figure it out. I was wondering how the heck other guys are so much better. Then I got in this #41 car and Philip Dietz is just amazing at giving me what I need. That’s 10 wins with the Outlaws this year, I can’t believe it. This team is incredible and I’m lucky to drive this thing.”

“When I got to battling with Sheldon I knew needed to get up in the seat to stay in front of him,” Macedo added. “Those lappers were holding up Logan on the top and I knew if I could fire across really hard into turn three and get in front of him that it would be hard for him to cross over.”

In the end, Hanover’s Logan Schuchart quest for a magical night fell short by only 0.208-seconds. It would’ve been a surreal score not only for the $75,000 payday, but it would match him with his grandfather Bobby Allen at 30 career World of Outlaws wins, all while driving a throwback scheme driven by Bobby in the 1990’s.

“All in all, two second-place finishes is way better than what we’ve done in the past here,” Schuchart noted. “I’m 28 years old, so I’ve got a lot of years left to win this race. It sucks, it stings, and I’m hurt, but we’ll come back next year and try it again. We’ve got a great team, great sponsors, and great fans. Carson just ran a great race tonight. He gave me a chance on the last lap, but I was too impatient.”

“We had some good restarts and gave these guys a run,” Haudenschild said. “Our car was awesome and I can’t ask for much more than what this team is giving me. It’s hard to get comfortable and qualify well here, but I think we’ve got both of those things figured out right now. I’m excited for what’s to come over the years at this track.”

Dillsburg’s Anthony Macri led the way as the highest-finishing PA Posse driver, collecting an extra $1,000 for his career-best fourth-place finish at the National Open. Two-time National Open champion David Gravel was behind him in fifth aboard the Big Game Motorsports #2.

UP NEXT: The World of Outlaws NOS Energy Drink Sprint Car Series remains in the state of Pennsylvania with the Nittany Showdown at Port Royal Speedway coming next weekend. The Speed Palace hosts The Greatest Show on Dirt on Friday & Saturday, October 8-9 with a $15,000-to-win finale on tap.