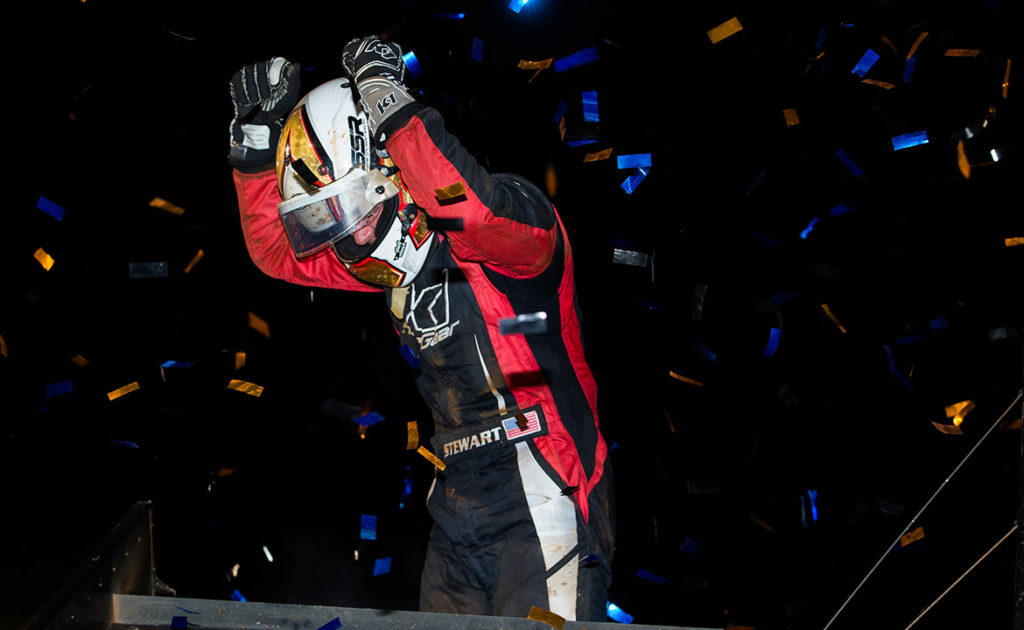 Shane Stewart was ready to hang up his helmet at the start of the year.

Instead, he wore it in Victory Lane Friday night at Williams Grove Speedway for his first World of Outlaws NOS Energy Drink Sprint Car Series win since June of 2019.

“There’s no better feeling,” Stewart said about winning with the World of Outlaws at Williams Grove. “This isn’t my best track, but I’ve had good runs. Just was never able to capitalize on the win. Just happy to be here.”

After losing his full-time ride with CJB Motorsports at the end of 2019 and no firm prospect on a full-time ride for this year, Stewart considered quitting racing. But before he let that thought become law in his head, Bernie Stuebgen called to offer a part-time deal in the Indy Race Parts #71 car.

It was an offer Stewart knew he had to capitalize on. And he had, even before Williams Grove, putting the #71 in the top-five about every time he hit the track with it. A win was near, but still missing each time.

The half-mile Williams Grove Speedway is not the track he expected to get his first win with the team at either. Stewart won at the speedway in 2017, but never pieced together consistent finishes after.

However, during the opening night of the Champion Racing Oil Summer Nationals, Stewart was the maestro of the paperclip-shaped clay oval.

He won his Drydene Heat Race and then won the DIRTVision Fast Pass Dash, putting him on the pole for the 25-lap race.. Then, when the main event went green, he rocketed ahead of second-place Anthony Macri, of Dillsburg, PA, and pulled away from the field.

From then on, no one could touch the Bixby, OK driver. Stewart’s car looked to have 10 more horsepower than everyone else the way it launched ahead of the field on restarts and added seconds between them every lap.

On a restart with 13 laps to go, Macri threw a slide job at Stewart going into Turn 1 and took the lead. His stint out front lasted about two more seconds before Stewart fired his car back underneath Marci on the exit of Turn 2 and darted down the backstretch like he was shot out of a canon to reclaim the lead.

He led all 25 laps to claim his 35th career World of Outlaws win and become the 10th different winner this year with the Series.

Ten-time Series champion and current points leader Donny Schatz made his way from fourth to second, ending the race 1.5 seconds behind Stewart.

“We were missing lap traffic. I was thinking to myself, ‘Thank God we have double file restarts on these big tracks, or we’d be spread out pretty quick,” said Schatz, of Fargo, ND. “Everybody’s car was good. Everybody’s motors are good. It’s really a game of chess at high speed. We needed traffic. Every time we got close a yellow would come out. That’s the way it goes.”

With his performance, and reigning champion Brad Sweet finishing seventh, Schatz was able to extend his points lead over Sweet again – now 16 points ahead of the Kasey Kahne Racing driver.

Macri ended the night third – his second ever top-five and top-10 finish with the World of Outlaws – after starting second, but still took his performance as a victory.

“It’s a win in our book,” Macri said. “To run third to these guys, there’s definitely no shame in that. We struggled a little bit tonight. We just kept pushing through. On the one restart I knew I had the chance to slide him (Stewart). So, I slid him and kind of bobbled on the curb and he got by me. I kind of lost my composure there for a lap or two. I think Donny got us the next restart. Shit happens.”

Stewart gave a lot of credit for his dominating win to Stuebgen – who had won a World of Outlaws race at Williams Grove before with Gio Scelzi in 2018 – and his Charlie Garrett Racing Engine.

“We spent the day at Charlie Garrett’s yesterday, and we had stories of (two-time World of Outlaws champion) Jason Meyers and all of the success he’s had with Brian (Brown) and Jason,” Stewart said. “He told me story that the first time he met Jason he told him, ‘Hey, I’m going to see you in Victory Lane tonight,’ because that was the first time that Jason had run one of Charlie’s motors. And Charlie puts such joy and pride in his motors that he puts a little bit of pressure on you. And he said the same thing to me tonight. He said, ‘I’ll see you in Victory Lane.’”

The World of Outlaws NOS Energy Drink Sprint Car Series returns to Williams Grove Speedway for the Champion Racing Oil Summer Nationals finale with $20,000-to-win on the line on Sat., July 25. Get tickets by clicking here.

If you can’t make it to the track, you can still watch all of the action live on DIRTVision.