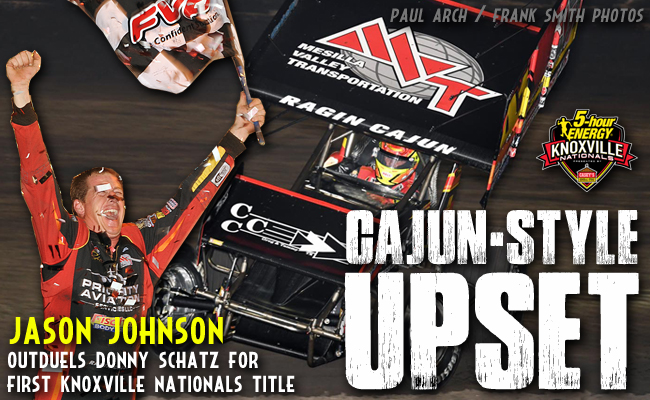 KNOXVILLE, Iowa — Aug. 13, 2016 — The 56th running of the 5-Hour Energy Knoxville Nationals presented by Casey’s General Store culminated Saturday night with the grandstands on their feet as the Ragin’ Cajun took home the win in one of the most exciting Knoxville Nationals in recent history, depriving fellow-Outlaw Donny Schatz of his tenth Nationals win.

With fireworks ablaze behind him, Jason Johnson stood on the back of his Priority Aviation #41 Maxim pounding his fists in the air as he celebrated his first-ever Nationals win and claimed the $150,000 prize.

It was a big night for the World of Outlaws Craftsman® Sprint Car Series as three Outlaws took over Victory Lane: Johnson, Schatz and Shane Stewart. As outlaws are wont to do, they rode in, took the loot, and left nothing but dust in their trail.

After his runner-up finish on Night 2, the Cajun Sensation was the high point driver of the night, earning him the spot beside another fellow-Outlaw, Daryn Pittman, who started on the pole. Kerry Madsen and Jamie Veal followed, with Schatz in fifth.

By Lap 2, the battle between Schatz and Johnson was on as Schatz came up to third. Meanwhile, Outlaws Shane Stewart and Brad Sweet battled it out for sixth, with Stewart holding his ground.

Pittman hit traffic by Lap 9, and Johnson battled him from the cushion – from where he won the race – for the next couple of laps, taking the lead off the fourth turn in Lap 11. But it was short lived. Lap 12 saw Pittman and Schatz pass Johnson. And in the next two laps Schatz and Johnson charged past Pittman.

By Lap 15, the race looked as expected, with the nine-time champ a half stretch ahead.

A caution for Craig Dollansky allowed Madsen to get past Pittman, and Stewart worked his way to fifth, but Schatz held a strong lead when the mandatory caution was called after Lap 25.

The real battle began on the restart with Johnson on the cushion and Schatz down low. Johnson took the lead with a slide job off turn 4 and continued to ride the cushion so high he nearly climbed the wall in Lap 34.

Meanwhile, Madsen made a play for second, taking it from Schatz for three laps; and another three laps later, in Lap 44, Schatz took the lead back from Johnson. The battle was on as they worked the half-mile Knoxville Raceway. Jason. Donny. Jason. Donny. They battled hard, trading slide jobs along with the lead, but victory was just not in the cards for the reigning champ as Johnson “Parked It” 0.168 seconds earlier for the win.

“I didn’t think he could race that hard for 50 laps, but he did,” said Schatz, who didn’t think the race could be won from the top either. “He did one hell of a job. I mean to run the last ten laps, or last lap – any lap during this race – it means the world’s toughtest spot in sprint car racing. And he figured out how to make it work and get there first, so hats off to him. Next year I’d like to be the one to win. But he won. He earned it. He did one hell of a job, and he figured out how to do it.”

“I know Donny wasn’t happy with me after the checkers, and that really kind of bothers me because I respect Donny as a driver and I want his respect as well,” said Johnson. “I don’t want to wreck nobody, and I want to race people clean, but like I told him, ‘God damn, dude, this is Knoxville Nationals!’”

The winning outlaw trio showed a tremendous amount of respect and admiration for each other in post-race interviews. Johnson stated he got a lesson from Stewart before the race and spent a lot of time talking with him about how to race the track. “All in all it’s a testament to friendship, to what life is all about, and to B.C.,” he said.

This important win for Johnson, flanked by Stewart and Schatz during the post-race press conference, is a great nod to his 2016 Drivers interview at the start of season: “The biggest competition has to be Donny Schatz because he has set the standard,” said Johnson back in February. “But as a team, we measure ourselves up to Shane Stewart and Larson-Marks Racing because he comes from the same background as I do and he’s with a team that’s only been out here for a couple years as well.”

Well, there you go, Ragin’ Cajun. You beat them both. How ’bout that?

The World of Outlaws Craftsman Sprint Car Series returns to action on Tuesday at Junction Motor Speedway. To find out more information and to learn how to buy tickets, visit http://woosprint.com/junction-motor-speedway

Jason Johnson’s epic win over Donny Schatz at the 56th running of the 5-Hour Energy Knoxville Nationals presented by Casey’s General Stores will go down as one of the best ever. Over the race’s final 25 lap segment the two drivers traded slide jobs and the lead on several occasions, even making contact at one point. In the end, Johnson was too strong and held on for his first ever Knoxville Nationals win. Schatz was second followed by Shane Stewart in third.