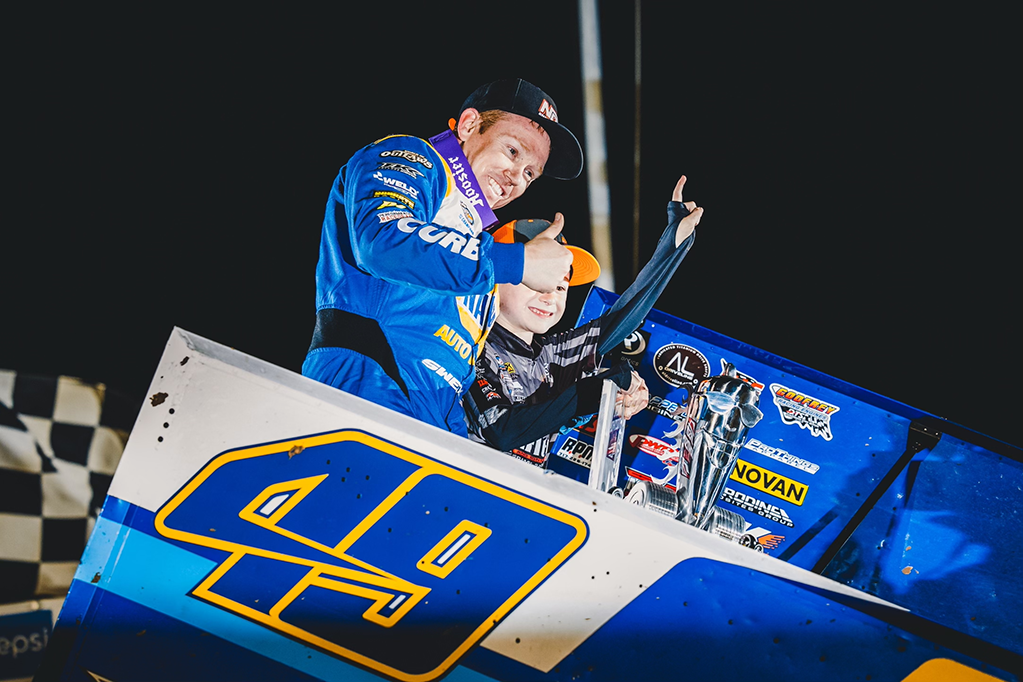 It was rough and tough, and tricky and treacherous; a track that Jason Johnson himself would’ve thrived on.

If it couldn’t be the #41, though, it’s no surprise that it ended up going to the #49 Kasey Kahne Racing, NAPA Auto Parts car,.

Leading all 30 laps on a “cowboy up” surface at Lake Ozark Speedway on Saturday night, Brad Sweet of Grass Valley, CA checked a big one off his bucket list by claiming the third annual Jason Johnson Classic to the tune of $15,000.

His third win of the 2021 season marked the 61st of his World of Outlaws NOS Energy Drink Sprint Car Series career. He’s a Knoxville Nationals champion, King’s Royal winner, and so much more, but Saturday’s win was admittedly one of the biggest of his stout career.

“This is definitely one of my biggest wins,” Sweet said afterwards. “I know it’s not the Knoxville Nationals or anything, but memorial races just mean so much. We lost Jason a few years back and I’ve missed him ever since. I think about Bobbi, Jaxx, and his whole family still sticking with the sport after everything that has happened to them. They’re a lot braver than I am. I hope Jason is looking down on us and smiling tonight.”

Sweet, the two-time and defending World of Outlaws champion, was impressive all night long on the Eldon, MO 3/8-mile. He set Slick Woody’s QuickTime, ran second in his Team Drydene Heat Race, and second again in the DIRTVision Fast Pass Dash to claim the outside pole position of the main event.

Sheldon Haudenschild, a runner-up twice before at Lake Ozark, had the honors of leading the field to the green flag in his Stenhouse Jr. Marshall Racing, NOS Energy Drink #17. It wasn’t Lil’ Haud, but The Big Cat who pounced on the conditions and put his #49 in front of the field to lead the opening lap, a command he would never relinquish it.

It wasn’t an easy win by any means for the KKR #49. Outside of one stoppage for a flipped fourth-running Jacob Allen on Lap six, it was a grinding 30 laps through lap traffic.

Things heated up at halfway when the initial installment of lap traffic slowed Sweet’s pace and brought Haudenschild to his back bumper. The #17 was hounding the #49 for a handful of laps before Sweet made the right move and separated himself from Haudenschild, who was boxed-in by traffic.

Once able to sneak away, Sweet put on an absolute clinic. He lapped up to the sixth-position and crossed the finish line with an astounding margin of victory at 4.218-seconds. Afterwards, he was adamant in making this night about Jason and the Johnson family.

“The night is all about honoring Jason and his legacy as a racer, as a father, and as a husband,” Sweet continued. “He was someone we all looked up to in the pits. He really made an impact on this sport. We really miss him. We want to take a moment every now and then and pause to remember him. Tonight is the night we get to do that. It’s truly an honor to win this race. This NAPA Auto Parts car was on rails. That’s a track that Jason Johnson would’ve had his elbows up on. He would’ve been tough to beat tonight.”

Sheldon Haudenschild of Wooster, OH gave Sweet all he could at halfway, but the combination of traffic and conditions allowed Sweet to escape. Saturday marked his third career runner-up result at Lake Ozark and his third consecutive top five finish at the Jason Johnson Classic. A strong run, but it left him hungry for a win at this joint.

“I’m gonna win this race someday,” Haudenschild told Bobbi Johnson afterwards. “We were really good, but just Brad out-raced us I think. I hung with him for a really long time, but he got through one pack of lappers better than me and it was game over. We want to win this one real bad. Even though it was rough it was awesome to drive. I had a blast.”

Coming home with a third-place finish and earning his first podium appearance of the season was James McFadden in the Kasey Kahne Racing, Karavan Trailers #9. Since making his way overseas, the Alice Springs, NT, AUS driver has yet to finish outside the top ten in World of Outlaws action.

“We just sort of rolled around and tried to keep out of trouble and capitalize on everyone else’s mistakes,” McFadden noted on his strategy. “Tried to minimize my mistakes as much as possible. It was a tough race, though. I always enjoy this track, it’s a lot of fun. This is a good confidence booster for us. We struggled in Texas, so running third is great for sure.”

Rounding out the top ten on Saturday night was Logan Schuchart in the Shark Racing #1S, Carson Macedo in the Jason Johnson Racing #41, Aaron Reutzel in the Roth Motorsports #83, David Gravel in the Big Game Motorsports #2, Brent Marks in the CJB Motorsports #5, Kraig Kinser in the Kinser Racing #11K, and Cory Eliason in the Rudeen Racing #26.

UP NEXT – The World of Outlaws NOS Energy Drink Sprint Car Series heads to Federated Auto Parts Raceway at I-55 next weekend. A two-day stop brings The Greatest Show on Dirt to the Pevely, MO 1/3-mile on Friday and Saturday, April 2-3. Fans can BUY TICKETS HERE.

WHAT TO WATCH FOR: World of Outlaws Sprint Cars Make Return to New York