BY THE NUMBERS: Ironman 55 at Federated Auto Parts Raceway at I-55 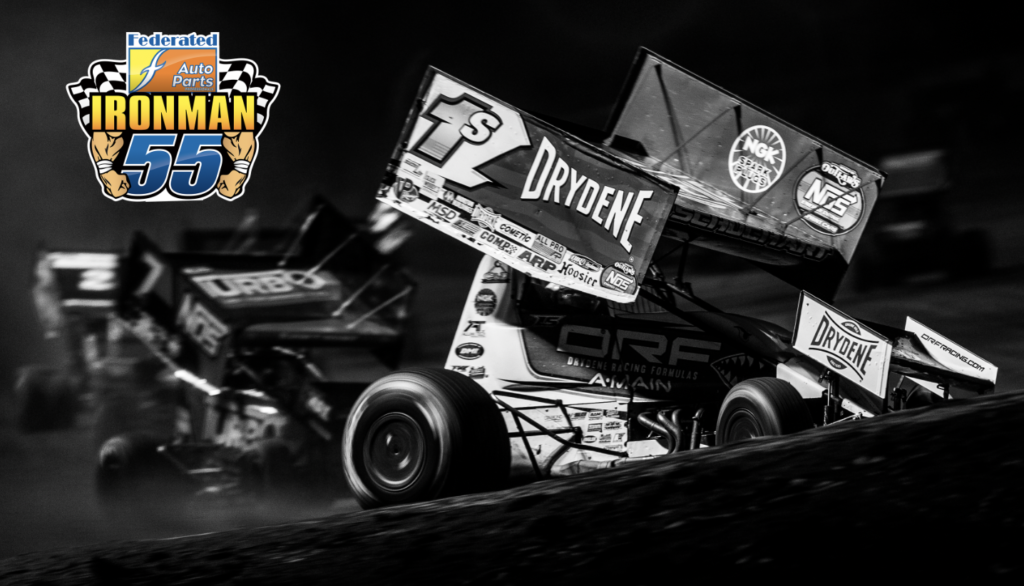 The World of Outlaws NOS Energy Drink Sprint Car Series has been competing at Federated Auto Parts Raceway at I-55 for 26 consecutive seasons. For half of that time span, the trademark event of the partnership has been the Ironman 55, a grueling test of man and machine.

This weekend, on Friday and Saturday, August 6-7, The Greatest Show on Dirt returns to Pevely, MO for the 13th running of the Ironman 55. If you can’t attend the spectacular yourself, you can watch the 55-lap affair LIVE on DIRTVision.

Fans can still BUY TICKETS HERE for this weekend’s doubleheader.

Here are numbers to know for the doubleheader event:

0 – Never before has an Ironman 55 winner proceeded to win the Knoxville Nationals the next week.

2.58 – Average starting position of Ironman 55 winners. The farthest any winner has started is sixth.

3 – Record for most Ironman 55 titles, won consecutively from 2011-13 by “The Crowd Pleaser” Craig Dollansky.

4 – Four consecutive Ironman 55 Features have been won from the pole position, although none have led all 55 laps from green-to-checkered.

4.72 – Donny Schatz’s average finish at the Ironman 55. The Tony Stewart/Curb-Agajanian Racing #15 has four runner-up finishes and a worst finish of ninth, but still zero Ironman titles.

5 – Victories apiece for Steve Kinser, Sammy Swindell, and Craig Dollansky at I-55, a tie for most all-time. Brad Sweet is behind them with four wins to his credit.

55 – Laps in Saturday’s finale, the longest of the season.

63 – Previous races held at I-55, which ranks as the ninth most visited track in Series history.

100 – Winning percentage of Brad Sweet in Missouri this year. He enters five-for-five with two wins at I-55, two wins at I-70, and a win at Lake Ozark.

142 – Laps led by Kerry Madsen at the Ironman 55, most all-time. The Tony Stewart/Curb-Agajanian Racing #14 will sit on the sidelines this weekend preparing for Knoxville next week.

306 – Minutes or roughly five hours overnight from I-55 to Knoxville Raceway, where several teams will race in Sunday’s Capitani Classic in preparation for the Nationals.

799 – Miles from Gettysburg, PA to I-55, which will be traveled by Danny Dietrich and the Gary Kauffman Racing #48 to race this weekend at the Ironman.

6,356 – Points accumulated by James McFadden, who is the new leading contender for the Kevin Gobrecht Rookie of the Year Award.

10,000 – Fine paid by Roth Motorsports following a rules infraction last weekend. With Aaron Reutzel suspended, Parker Price-Miller will drive the car this weekend at I-55.