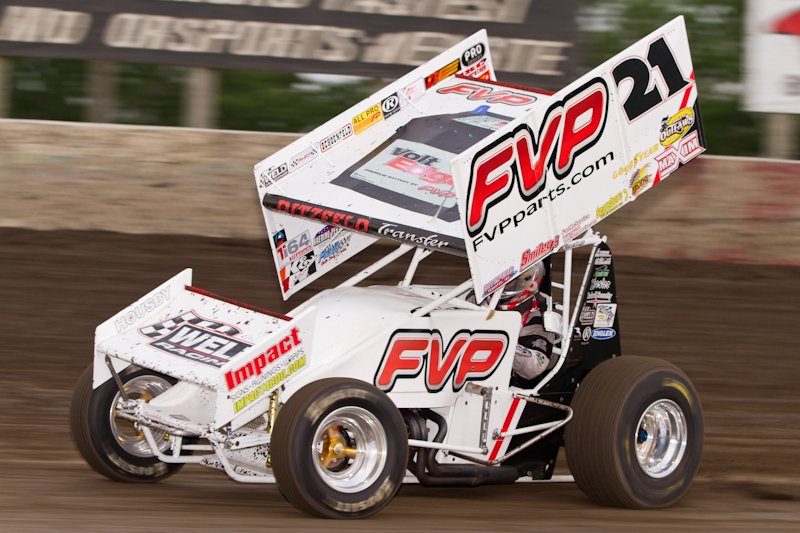 CONCORD, N.C. — June 7, 2011 — The yellow flag waved over the field with nine laps to go in the Kansas City Shootout on Saturday night at Lakeside (Kan.) Speedway. Brian Brown had led from the green flag. He was seeking his first World of Outlaws Sprint Car Series victory. Now, facing a double-file restart alongside legend Steve Kinser, he had a decision to make: Do I go to the top and hope I can carry the momentum around the half-mile oval, or do I line up on the bottom and try to get out in front of Kinser?

He chose the bottom, and Kinser jumped out to the lead to win for the 566th time in his career. It was a tough lesson, but one he’ll remember this weekend when the Outlaws invade Knoxville Raceway, where Brown is the reigning 410 Sprint Car champion.

“I don’t have very much experience with the double file restarts that the Outlaws use,” said Brown, of Grain Valley, Mo. “I was trying to figure out which line to take. Which one would give me the best shot at getting the win. I picked the inside and had (Steve) Kinser lined up outside. I also couldn’t quite decide when to take off and he just got me off of the start.”

Brown settled for second after holding off a strong charge from 2011 Kevin Gobrecht Rookie of the Year contender Cody Darrah. Brown, of Grain Valley, Mo., wasn’t too disappointed with his finish. Sure a win would’ve been great but to have such a competitive night did wonders for team morale and the driver’s confidence.

“More than anything, it reinforced the fact that I can drive with these guys and it built some momentum for this team going into Knoxville,” Brown said. “There is no such thing as a home-field advantage when the Outlaws come to town. They are the best. Period. But last year we finished second to (Jac) Haudenschild at the Hall of Fame Classic and sat on the pole for the (Knoxville) Nationals so it’s obviously a great place for us and I think we’ll have something for them.”

Brown isn’t the only one that’s confident in his teams’ ability at the legendary half mile track in Iowa.

“I’m very proud of what he has accomplished in such a short period of time,” said Danny Lasoski, Brown’s uncle and the 2001 World of Outlaws Champion and a recent National Sprint Car Hall of Fame inductee. “My dad and I helped him get going and now he’s taken it to a whole new level with owning his own team and taking care of a wonderful sponsor in FVP.”

Lasoski has a front row seat to his nephew’s triumphs. The Dover, Mo., native is looking to capture his unprecedented ninth track championship at Knoxville Raceway in 2011 and races against his nephew often. Lasoski also has a bold prediction for the future.

“Brian will win the Knoxville Nationals,” Lasoski said. “He has all of the tools and the abilities as a driver. It’s only a matter of time.”

Brown, Lasoski and the rest of the Knoxville Raceway regulars will battle the stars and cars of The Greatest Show on Dirt this weekend in the Mediacom Shootout, Friday, June 10, and Saturday, June 11. Tickets are available by visiting www.KnoxvilleRaceway.com.