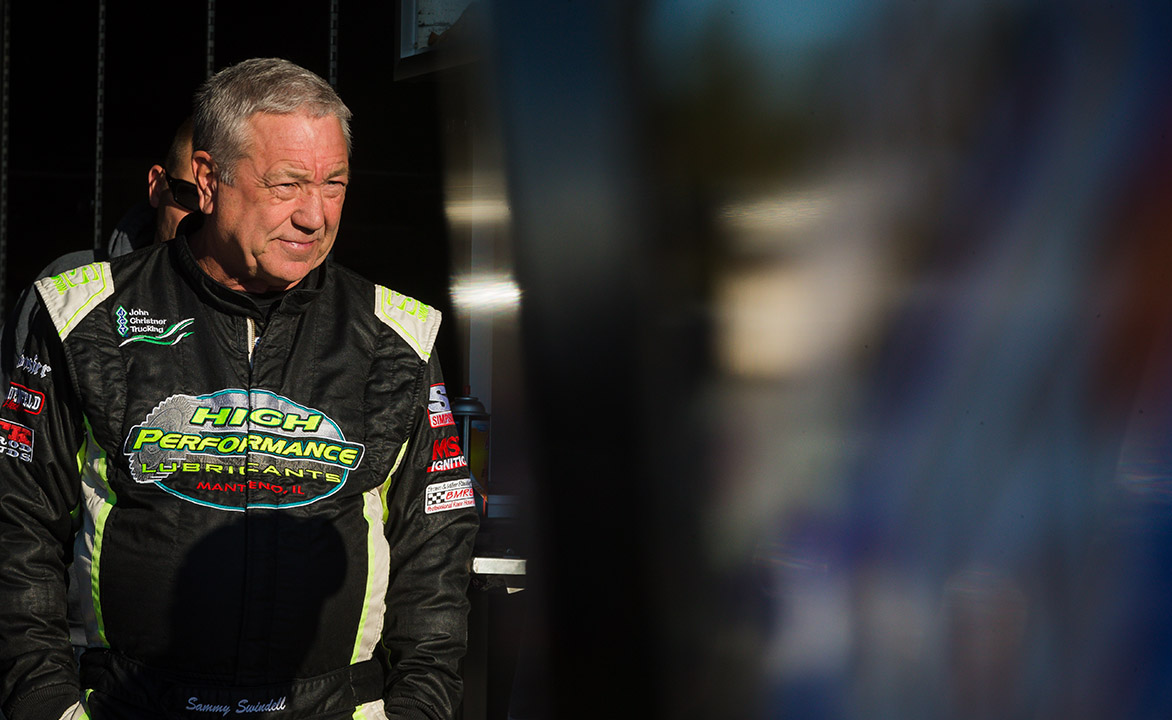 A state trooper stood at the pit gate going into Turn 3 at Bristol Motor Speedway, speed gun in hand. With a cloud of dirt filling the coliseum-like arena, he pointed the gun at the pack of 900-hp winged chariots soaring by.

Later in the day, as Sammy Swindell was walking out of the track, the trooper stopped him and said, “Well, you’re the fastest one.”

Curious, but not unfamiliar with the accolade, Swindell said, “Oh, yeah?”

The trooper then told the three-time World of Outlaws NOS Energy Drink Sprint Car Series champion that he clocked him at 185mph — a number Swindell still chuckles about today.

The 394-time World of Outlaws Sprint Car winner won at the famed half-mile speedway in his home state of Tennessee in 2000 and 2001 — two fan favorite races still talked about to this day.

(RELATED: On Saturday, April 11, you can relive Swindell’s two wins at Bristol during the #DVWatchParty presented by NOS Energy Drink at 7 p.m. (ET) on DIRTVision. Swindell, Stevie Smith, Eli Gold and Johnny Gibson will be on hand to provide commentary about the events.)

“I think they’re right up there,” said Swindell on how he would rank his Bristol wins. “Just because of the situation. And it was my own team that I had. As far as owning my team and running it myself, being able to go there and win both of the big main events there, it was pretty huge for us to do that because it’s something that will never happen again and a record that probably won’t be broken.”

Swindell holds several records he knows with time may fall. But at 64 years old, on his 50th year of Sprint Car racing, “Slammin’ Sammy” Swindell isn’t done yet trying to extend those records and make new ones — ever present by his “#StillWinning” calling tag on social media.

He’s intending to run about 20 World of Outlaws races this year for his son Kevin Swindell’s Swindell Speedlab team — attending all of the big events like the Jackson Nationals, Kings Royal, NOS Energy Drink Knoxville Nationals and Can-Am World Finals.

“It’s really nice,” Swindell said about driving for his son’s team. “Just things came together where we could do that, which I’m very appreciative of. We’ve been around each other more than I’ve been around any crew chief or crew member. We kind of know where we’re at with each other. We kind of think alike. It makes a lot of things easier. He’s pretty young as far as owning a car. He’s getting better every day, but not far off to begin with. I’ve been able to help him through the first part a little bit. He’s really adapted to that and learned a lot in a short time.”

The pair ran a handful of races together last year, including the illustrious Kings Royal at Eldora Speedway. After qualifying for the race Swindell showed the same amount of passion and emotion he did 20 years ago when he won at Bristol by pumping his fist in air and yelling with excitement.

“To go to a big race like that and be capable of being able to put something together, and being in your son’s car, with everything he’s been through, it was just really big,” Swindell said.

He led laps early before fading to seventh — a result he knows he can improve upon this year with Kevin.

“When I ran for him at the Kings Royal, we only ran a couple times together,” Swindell said. “So, to do as well as we did, at the end we kind of talked and if we had seven or 10 races together before we went there, we would have been way better than we were. We were looking forward to doing that this year, getting to run quite a few races and be within a couple weeks a part. Like any good team, it takes a little while to get everything working right.”

He’s only six wins away from reaching his 400th career World of Outlaws win — currently sitting second on the all-time win list behind 20-time Series champion Steve Kinser with 690 wins and in front of 10-time Series champion Donny Schatz with 295 wins. And while he admits it would be nice to hit that milestone, it’s not a goal.

He rarely thinks about his win total. The grandeur of it only comes to him when someone brings it up. “It’s like, ‘Oh, that is a big number,’” he said with a chuckle.

While he’s won hundreds of races and raced in hundreds more, there’s few he’s actually got to watch. But through social media and DIRTVision’s re-airing of classic races, he’s been able to relive memories more than ever before.

“I’ve seen more pictures and more videos of me racing than I’ve seen in the last two or three or five years,” Swindell said. “There’s a lot stuff people have or put out there. A lot of times I race and don’t get to watch the races that I’m in. Maybe it comes on once and I’m doing something else. There’s times stuff will pop up and I’ll watch it. Just the last few weeks people have been posting pictures and videos of things I don’t have or haven’t gotten to see. So, it’s pretty cool.”

Getting to relive his Bristol wins through DIRTVision on Saturday brought back memories of his first time at the track. In 2000, directly before the NASCAR Cup Series race, before a spec of dirt was put on the track, he was asked to make a few practice laps in his Sprint Car with asphalt tires. It’s an experience he’ll never forget.

“The track was definitely banked more than with the dirt,” Swindell said. “It was still pretty awesome to be there when the place was full. All of the NASCAR drivers and the crews, everybody was out there watching me make those five or six laps around there. That was probably the most people I drove in front of. That was pretty neat.”

There was no trooper with a speed gun that day, but Swindell knows he probably beat the 185mph mark he hit on dirt. To some, that may seem terrifying. To Swindell, he enjoyed every second of it.

“You kind of know that you’re going faster,” he said. “I don’t know about other guys, but I’ve always enjoyed the faster places. You know stuff could happen, but it’s just a whole different deal to do it on a track that size and that fast and run through the corners and just everything about it. The whole facility. It was just larger than life from what we normally do. For me, it was fun.”

DIRTVision presented by Drydene is bringing race fans to Tennessee this weekend during its Friday and Saturday #DVWatchParty.

On Friday, April 10, at 7 p.m. (ET), the #DVWatchParty presented by Morton Buildings will showcase the 2005 World of Outlaws Late Model races at Memphis Motorsports Park and will then show the 2007 Late Model race at Volunteer Speedway. Special guests Rick Eshelman, Clint Smith, Chris Madden and Jimmy Owens will provide commentary on the events.