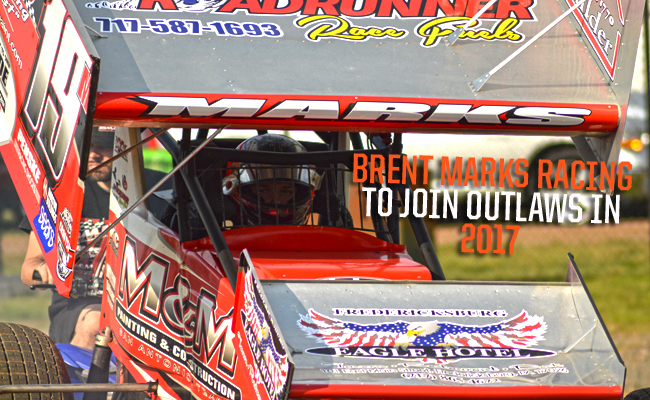 Marks to live ultimate dream on the national tour

CONCORD, N.C. – December 6, 2016 – Brent Marks joins the World of Outlaws Craftsman® Sprint Car series tour under his family-owned Brent Marks Racing (BMR) team for the 2017 season. Marks, hailing from Myerstown, Pa., has long dreamed of running with the Greatest Show on Dirt from the time he first hopped into a 410 sprint car seven years ago.

“It took a lot of work to make it happen, but I’m ready to go,” said Marks, his voice upbeat. “It’s been something I wanted to do my whole life. I got into 410 sprints knowing one day I wanted to be a World of Outlaws driver. Ever since then, I’ve been working at it year after year.”

Marks is still seeking his first career World of Outlaws win, having made appearances in the circuit since 2009. The 25-year-old first entered the national tour in May 2009 at Williams Grove Speedway, where he said the experience was “a rude awakening.” Marks qualified 37th in a 45-car field and did not advance from the C-Main. But as he developed the knack for competing in a faster field, Marks began to excel.

Since, Marks has compiled three top-5 and 18 top-10 performances in the series. Marks, who usually entered series races in-state, notably was a member of PA Posse Racing, whose rivalry with the Outlaws spans decades. In 2017, the No. 19M M&M Painting & Construction/ BAPS Auto Paint & Supply teamwill commit to a series it previously sought out to beat. But to Marks, the decision was based on a personal reflection of reaching the highest level in sprint car racing.

“I want to go ahead and chase my dream, to take this risk and go out there and do it,” Marks said. “For me, it got to the point in my life where I didn’t want to waste any more time. Time flies, and the next thing you know I’ll be 35 [years old] and feel like this opportunity slipped through my fingers. I didn’t want that to happen.”

“[Pennsylvania] is one of those places I’ll be proud of – where I grew up racing,” Marks said. “The PA Posse is such a famous brand, and it was really cool. But I’ve always been a fan of the World of Outlaws — even before I was racing sprint cars. I’m sure I’ll be called a traitor, but we’ll see. I have to follow my dreams.”

Marks’ childhood dream of becoming a racecar driver materialized when he was nine years old. His father, Jeffrey Marks, took him to the nearby Silver Spring Flea Market in search of a suitable go-kart. The search lasted hours. With his father already involved in racing, it was in the family bloodline. They had to find the perfect fit.

In his first year, Marks won the Shippensburg (Pa.) Speedway track championship. Marks started locally, but went on to win more than 350 races and 16 championships coastally in go-karting and micro sprints. When Marks upgraded to the 600cc micro sprints, he and his dad focused more on traveling throughout the state. Marks said it was neither in his father’s mind nor budget to pursue full-sized sprint cars, but the racing spirit overwhelmed the father-son duo to take the leap.

With no experience in regular sprint cars, Marks found it difficult to find a ride – the path most drivers suggested. Taking the road less traveled, Marks and his father bought a car to race a limited schedule. Even with finite resources, Marks said he throttled down and never worried about conserving his equipment. His exposure in the industry demanded solid performances.

“We ran it like a business,” Marks said. “If we didn’t have the money, we didn’t spend it. If we did, we bought what we needed to build a race team. Now, here we are seven years later, a World of Outlaws team. It’s just amazing what we’ve been able to do. You don’t really know what you’ve accomplished until you sit back and think about it. We never could’ve dreamed that this was what it was going to be.”

As BMR embarks on a national tour, Marks’ father – a businessman by trade – is also giving him the chance to operate the team. For Marks, denied rides and rockier roads have forged a divine passage to his dream. Now he will take his father’s teachings to numerous tracks over a 10-month span.

“I know I’ll have a ride next week,” said Marks jokingly. “This is a sense of accomplishment now that I followed my dreams. There’s a lot on my plate now, but I love the challenge. We’re really pumped to have come this far together. This is something that when I’m old and retired, I can sit back and realize how I was able to do this with my dad.”

Get to know Brent Marks: