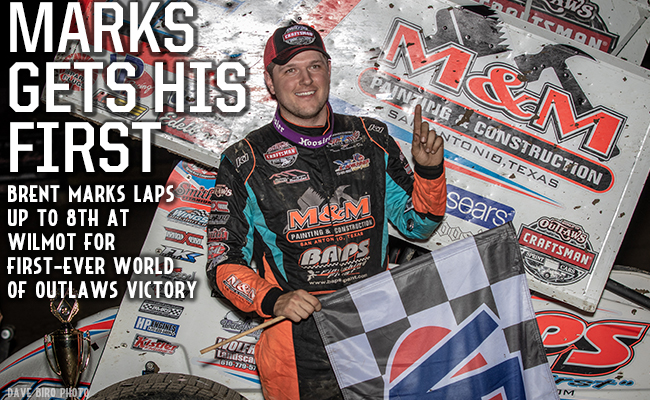 Daryn Pittman won the Sears Craftsman Dash, earning the pole for the 40-lap Feature alongside Kevin Gobrecht Rookie of the Year contender Ian Madsen. A brief, but heavy, rain shower drenched Wilmot Raceway during the Last Chance Showdown and caused for nearly a two-hour delay before the Feature.

The first lap of the Feature got off to a bumpy start for veterans Kraig Kinser and Joey Saldana, as they both ended upside down in turn one. Both drivers were uninjured in the accident, but neither returned to competition. Kinser, who set Quick Time over the field for the first time this season, started third and his opening lap accident moved Brent Marks from inside the third row, to outside the second row.

Pittman controlled the field on the second attempt and Marks quickly established himself as a threat, maneuvering his way to second at the conclusion of the first lap. The final caution of the evening flew on Lap 5 when Gio Scelzi and Ian Madsen got together battling for fourth on the backstretch, with the latter getting the worst of it, ending his night.

Pittman continued to show the way as he quickly reached the back of the field almost instantaneously at the Wilmot bullring. Pittman cleared the first handful of lapped cars while Marks stayed right with him, waiting to pounce.

On Lap 13, Pittman remained bottled up in heavy traffic and Marks was able to sneak underneath to lead the first Outlaw laps of his career.

From there, it was pure domination.

Marks quickly distanced himself from Pittman and began lapping cars at a torrid pace. With 10 laps remaining, Marks’ lead was half a track over Pittman. Marks hopped the cushion in turn two with seven laps remaining, allowing the lapped car of Jason Johnson to get back by the leader momentarily. Marks would fight his way back by Johnson and go on to win his first career World of Outlaws Craftsman Sprint Car Series Feature by more than four and a half seconds.

When Marks car arrived in Victory Lane, the right front tire was punctured and flat, presumably from when he hopped the cushion. Nonetheless, Brent Marks had finally made it to the place he dreamed of as a kid.

“This is a dream come true,” a relieved Brent Marks said upon exiting his family-owned No.19 in World of Outlaws Victory Lane for the first time. “It was nice to finally have a night with no troubles lingering throughout the night, but I never expected this. This is awesome. I’ve been trying so long to get my first Outlaw win, this is unreal,” an elated Marks added.

When asked about the closing laps, Marks referenced the flat tire, “I could barely turn the car. I was just hanging on, it was a handful.”

Quite possibly the most remarkable thing about the Brent Marks Racing No.19 team is the fact that the team has one crew member. Jesse Lentz and Marks, who prior to last season had never raced further west than Knoxville, travel from race-to-race competing against teams not only with multiple crew members, but crews and drivers with decades of World of Outlaws experience in their back pocket.

“It’s been tough, Jesse and I have been really exhausted, especially with all the problems we’ve had the past few weeks. I can’t wait to get back to the hotel and sleep until noon,” Marks said with a huge smile.

Kasey Kahne Racing teammates Daryn Pittman and Brad Sweet both echoed their happiness to see a fellow World of Outlaws regular get his first career victory. “I made too many mistakes and allowed Brent to get by. But truthfully, I don’t think it mattered, because once he got by me, he was in his own zip code. You hate to lose races and give up the lead, but honestly, I’m happy for him. I know what it’s like and what it feels like to get that first win. It was a solid weekend for us, we’ll come back Tuesday and try to get a win,” Pittman said in good spirits.

“Brent did a great job. I’m happy for him, it is always fun to get your first win. We’ll take a podium and look for a win on Tuesday at Fairbury,” Sweet said.

David Gravel’s winning streak at Wilmot came to an end as he finished fourth, with Gio Scelzi scoring a career-best fifth aboard the Indy Race Parts No.71. Shane Stewart, 11th-starting Sheldon Haudenschild and Donny Schatz were the only other cars on the lead lap as Marks lapped up to eighth place. After making the Feature as an alternate because of Justin Peck scratching, Matt Vandervere earned KSE Hard Charger Honors coming from 24th to 12th.

The World of Outlaws Craftsman Sprint Car Series continues its 40th Anniversary Season at Fairbury American Legion Speedway in Fairbury, Illinois on Tuesday with the FVP Platinum Battery Showdown before heading to Jackson, Minnesota for the $40,000 to win AGCO Jackson Nationals at Jackson Motorplex. Catch every lap LIVE on DIRTVision.com!