Blaney Back to Sprint Cars 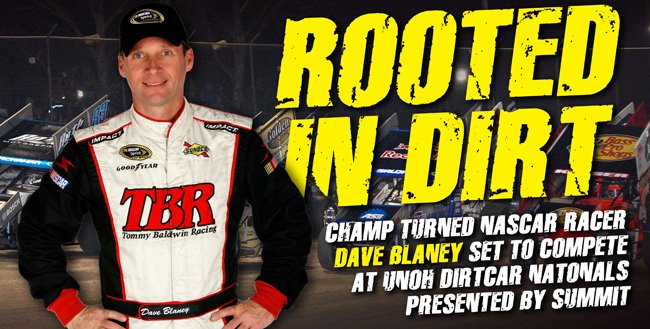 CONCORD, N.C. — Feb. 7, 2012 — Dave Blaney will be the latest NASCAR competitor to return to his dirt roots and compete with the World of Outlaws Sprint Car Series next week at the 41st UNOH DIRTcar Nationals Presented by Summit Racing Equipment.

Blaney follows a trend of NASCAR stars who were raised on dirt track racing and are eager to return to it. Last year, Tony Stewart claimed his first career World of Outlaws victory in July at Ohsweken (Ontario) Speedway — a significant moment he later said propelled him to his third NASCAR Sprint Cup championship. Then, NASCAR star Kasey Kahne violently flipped out of Williams Grove Speedway in Mechanicsburg, Pa., in a crash caught on video that made it all the way to ESPN’s SportsCenter. Kahne walked away and raced the next night.

Both Stewart and Kahne own multiple high-caliber World of Outlaws teams and have been known to surprise fans by quietly signing in to race themselves on any given night. Blaney, the 1995 World of Outlaws champion and one of the most accomplished drivers in the series’ history, will definitely be racing in Florida at Volusia Speedway Park a week before his NASCAR season begins in nearby Daytona Beach.

“I’ve missed it the whole time I’ve been doing NASCAR,” Blaney said. “I follow every bit of it and keep track of what’s going on. When I get done racing NASCAR, I’d love to get back on that side of it. I’m a World of Outlaws guy that went and did something else.”

Blaney, who raced only one sprint car event last year — the 3rd annual Lou Blaney Memorial, which is a race in honor of his late father held at Sharon Speedway in Hartford, Ohio — will drive for Tom Leidig in Florida. It’s a car based in Florida and usually piloted by Brooke Tatnell, who has prior commitments chasing his record ninth World Series Sprintcars title in Australia.

Since most of the team’s sponsors are based in Florida, Leidig — who has never had his car race in a 410ci event in his home state — told veteran crew chief Mike Woodring to find a talented driver.

“He was one of the first people who came to mind when this deal came about back in November,” said Woodring, an accomplished sprint car racer in his own right who has excelled as a crew chief. “I know he can drive. His record shows that. I just thought it’d be cool with him running the (NASCAR Sprint) Cup car that week. I just want to have fun and do well.”

In addition to the three World of Outlaws races Feb. 17-18-19, Blaney will begin the UNOH DIRTcar Nationals Presented by Summit by competing on Feb. 15-16 in a pair of UNOH All Star Circuit of Champions events at Volusia — a fast half-mile track he hasn’t raced on in a long time.

“It could have easily been late ’80s or early ’90s when I was there last,” he said. “It’s really, really hard at Volusia. I’ve seen guys win the feature one night and not make the feature the next night. I want to get a bunch of racing in this year and this will be a good start.”

For more information on the World of Outlaws, click WorldofOutlaws.com, and for the UNOH DIRTcar Nationals Presented by Summit, click DIRTcarNationals.com.