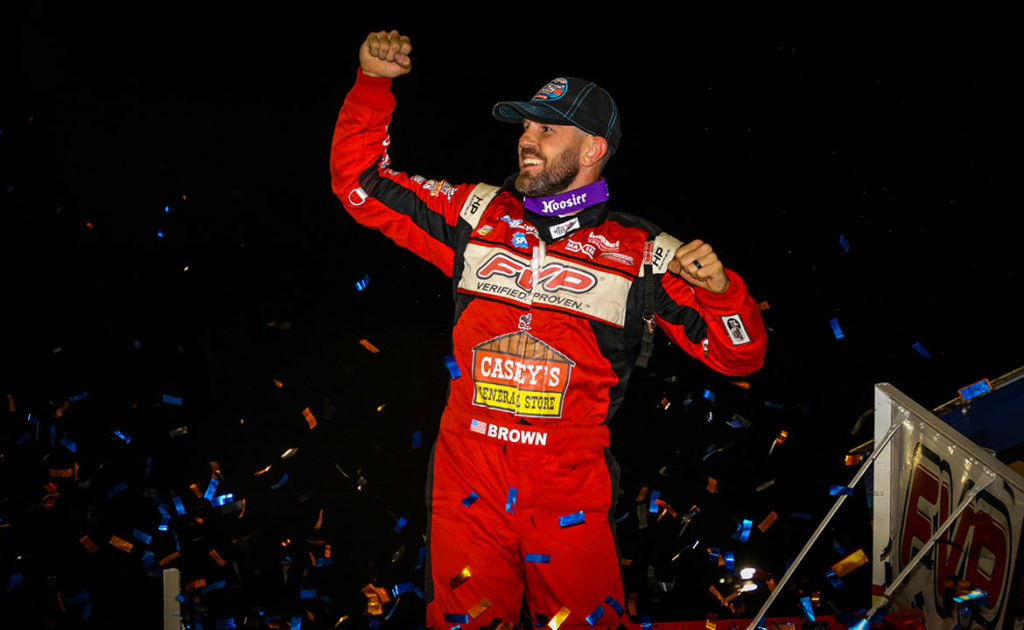 There was gravitas in Brian Brown’s yell. After slapping the top wing of his Casey’s General Stores/FVP No. 21 Sprint Car, he held his right fist in the air and stared out to the crowd with the expression of an alpha predator after claiming his territory.

Brown won his first World of Outlaws NOS Energy Drink Sprint Car Series race of 2019 at Knoxville Raceway Friday night, and his fourth win in four starts, this year at the iconic raceway.

“It’s huge,” Brown said, holding his emotion back with chuckles. “I dreamed of racing and saying, ‘I hope when I win my first Outlaw show, I can win it at Knoxville.’”

“That was my goal,” Brown said. “But I won at North Carolina. Then we won the next two in Arizona. Then I finally win one in Kansas, but it’s still not home. This is.”

To claim the win, he had to fend off Daryn Pittman and Shane Stewart – both winners already this season – and 10-time Series champion Donny Schatz. Beating the eminent World of Outlaws competition meant Brown had to be aggressive.

“My mindset the whole while, really all night, was to just be aggressive,” Brown said. “If there was an opportunity to do something, go.”

He took that opportunity in the first turn on the initial start. Polesitter Daryn Pittman fired to the lead past second-place Shane Stewart and took his Roth Motorsports No. 83 to the high side going into turn one. At the same time, Brown had made his way underneath Stewart and threw a daring slide job into turn one, clearing Stewart and Pittman at the apex of the corner.

Brown’s car then slid to the high side of turn two, a car length ahead of Pittman. Exiting the turn, Pittman could get as close as Brown’s bumper before the white No. 21 rocketed down the back stretch, putting about a three-car length distance between first and second-place.

“We got a good start there and got by Shane, and I didn’t really know what Daryn was going to do… I went on across,” Brown said. “I thought that was very important.”

Brown continued to grow his lead over Pittman until a caution on Lap two for Sammy Swindell who lost power on the front stretch.

On the restart, Brown launched to the lead, clearing Pittman going into turn one. Like the original start, Pittman closed to Brown’s bumper exiting turn two, but that was as close as he would get to the lead again all night. Brown sped away, putting almost half a track distance between he and Pittman 10 laps into the 25-lap Feature.

The three-time Knoxville Raceway track champion – two in a 410 Sprint Car, one in a 360 – cruised around the half-mile raceway like it was a house he built. Lap cars only made Brown faster. He stayed aggressive, passing two or three of the slower cars at a time.

“I knew it was going to be tough to pass lap cars,” Brown said. “I knew I had to make my moves count. If I could get a chance to get two or three at the same time, we had to do that. Because that just makes it harder for the guys behind.”

Brown took the checkered flag four seconds ahead of second-place Pittman. He led all 25 laps. Stewart finished third, after dueling with Schatz for the position.

Pittman showed speed all night, finishing second in his Drydene Heat race and winning the DIRTVision Fast Pass Dash – after getting the outside pole starting position in the Dash draw.

While he didn’t leave with the win, Pittman was still pleased with the overall performance.

“That’s the closest I’ve ever been to the front or seeing the front here,” Pittman said. “This is not a great race track for me. So, for me, to feel like I could keep him (Brown) in my sights was a huge accomplishment for myself and this race team. All and all, my car was pretty close. I’ve just got to make a few better decisions and maybe get our car a little better.”

His second top-five in-a-row has now left him tied for third in points with David Gravel, who finished ninth. Brad Sweet continues to lead – now by 10 points over Schatz, who finished one spot ahead of him Friday night; Schatz, fourth, and Sweet, fifth.

Brown, not running full-time with the World of Outlaws, isn’t concerned about points. He’s here for wins. And when it comes to Knoxville Raceway, he’s solidified himself as the current alpha.

“I’ve been here before where I’ve maybe been the fastest car at Knoxville, but come to these (World of Outlaws) races I kind of lay an egg, or finish fourth or fifth, which is laying an egg for us,” Brown said. “It’s good to be able to have a fast race car and capitalize on that. We’ll celebrate tonight and get back to the drawing board tomorrow.”

Brown will get the chance to double down for another World of Outlaws Knoxville win, when the Series returns Saturday, June 15, for the final race of the Brownells Big Guns Bash doubleheader at Knoxville Raceway.