BETTER THAN THE FIRST: Price-Miller holds off Donny Schatz for second career victory 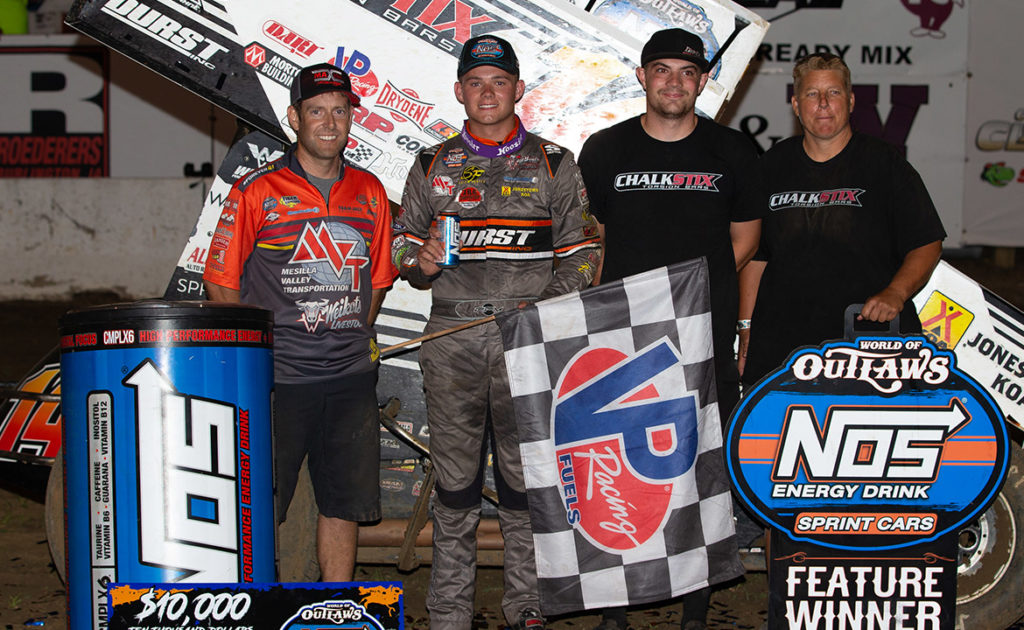 A second career World of Outlaws NOS Energy Drink Sprint Car Series win was in sight for Parker Price-Miller – along with a first career win for Dietz Motorsports.

With four laps to go in the 30-lap Feature at 34 Raceway, Price-Miller had a near two-second lead over 10-time Series champion Donny Schatz.

However, his charge went from attack to defense in a split second. He pulled a wheelie off the corner while trying to pass a slower car and when he landed the car’s mud guard got into a spark plug wire, killing a cylinder. His speed slowed. Schatz closed in.

The near two second lead closed to about three-tenths. Schatz, who hasn’t won since May and hasn’t finished on the podium in eight races, was just as determined to take the victory. And behind both of them was a hard charging Brad Sweet – the reigning champion and current points leader.

With a hurt engine and champions breathing down his neck, Price-Miller – in his seventh part-time season – showed the poise of a veteran, not letting the pressure corrupt his focus. Fighting to extract every ounce of speed he could from his ChalkStix #14 car, Price-Miller held off Schatz by 0.101 sec. at the line to pick up the Friday night win and $10,000 top prize.

“It’s amazing,” Price-Miller said about getting his second career World of Outlaws win. “It feels really good. The first one (at Tri-State Speedway in 2017) is always going to be special to me. Haubstadt, it favors non-wing guys, where I came from. To win here on an unusual track that all of the Outlaw guys are going to be good at and to beat Donny (Schatz) and Brad (Sweet) there on the podium is really special. Probably on top as my number one.”

Car owner and Crew Chief Philip Dietz was equally as excited to pick up his fist win with the team he co-owns with his wife.

“It’s pretty crazy to be honest,” said Dietz, who has two Knoxville Nationals wins as a crew chief for Jason Johnson Racing. “He ran a great race. I was getting nervous there at the end. I could tell he was down a cylinder… I couldn’t be happier. I wish my wife Brooke was here. It’s really special.”

Price-Miller and Dietz Motorsports had been finding consistency and building momentum in the past couple of weeks. They entered the event with four top-10 finishes and two top-five finishes in the last five races. Their speed continued into the event at 34 Raceway – the Series’ first visit back to the track since 2014 – with a sixth-place qualifying effort and a runner-up finish in the Drydene Heat Race and DIRTVision Fast Pass Dash.

Schatz won the Dash, but Price-Miller showed he was not going to let Schatz run away with is second win at the track by staying within reach throughout the six-lap race.

When the Feature went green, Price-Miller looked to have 10 cylinders under the hood of his Dietz Motorsports machine by darting around the outside of Schatz on the exit of Turn 2 with ease. From there, he ran away and never looked back.

A red flag at the halfway point for Lynton Jeffrey flipping terminated Price-Miller’s three second lead over Schatz. It proved to be a mere annoyance than true hinderance. Price-Miller picked up where he left off on the restart and drove away from the Tony Stewart/Curb-Agajanian Racing #15.

With nearly three laps to go, Price-Miller suffered the spark plug issue and found himself in Schatz’s clutches. However, in the closing battle between David and Goliath, it was the Goliath who almost took himself out of the duel. Schatz jumped the cushion exiting Turn 2, causing him to get out of shape and make contact with third-place Kerry Madsen, who then flipped.

Down on power, Price-Miller had two laps to hold off Schatz. Fortunately for him, the field lined up single file for the restart. If they were double file, Price-Miller said he doubts he would have been able to fend off Schatz.

But after the green flag waved for the final time, Price-Miller did just that. Schatz snuck to his outside off Turn 4 and tried to charge his way past but ran out of time before the checkered flag was presented to the Kokomo, IN driver.

“That’s all you can do,” Schatz said. “We got a run at the green-white-checkered. He started to bobble a little bit and got us a run. Tried the bottom one lap and knew he was going to get protective the next one, so we just went for something and tried to guess. We got close.”

Schatz’s finish moved him back into second in points – now 114 points behind Sweet, who finished third.

Sweet earned the KSE Racing Hard Charger award for the second race in a row. He made his way from 10th to third – his 15th podium finish in the first 20 races and sixth in a row.

For Price-Miller, with his first win of the season and first with Dietz Motorsports now secured, he foresees more to come in the future.

“It’s just really hard to win these races,” Price-Miller said. “I haven’t really been in a consistent ride. I’m really happy with where I’m at. It takes consistency and to build a team around you. You just have to keep with those guys and more wins will come.”