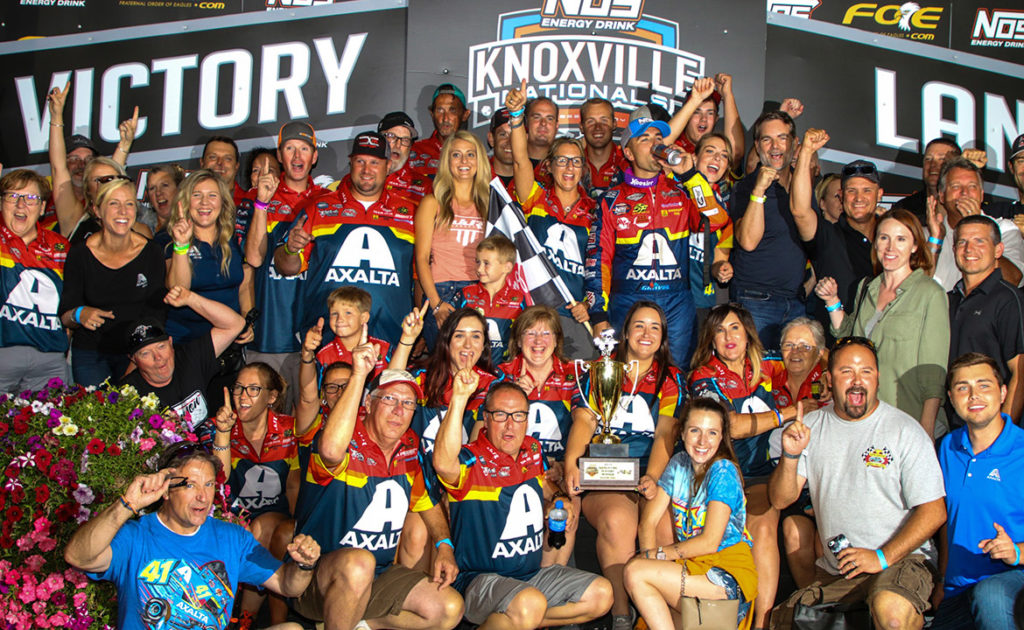 Knoxville Raceway has been on David Gravel’s mind for a while.

Before even making a lap in his new No. 41 Jason Johnson Racing ride at the beginning of the 2019 World of Outlaws NOS Energy Drink Sprint Car Series season, Gravel couldn’t help but mention his excitement for going to the Iowa raceway with JJR.

“That car is extremely good at Knoxville,” Gravel had said.

Six months later, Gravel brought the Knoxville Raceway crowd to its feet Thursday night by claiming his second win in-a-row at the iconic track during the second Qualifying race for Saturday’s Knoxville Nationals – which he locked himself into and will start outside pole. He also won the raceway’s Capitani Classic on Sunday.

“I really feel good about where we’re at,” said Gravel, who was also sporting blue and florescent colors for new sponsor Axalta. “I was nervous drawing the seventy-one today, out of seventy-five, but we’ve been qualifying well all year and I was able to capitalize on that. It was an awesome night.”

Gravel and his JJR team have been stellar in Qualifying all year long, with 12 Quick Times so far this season. He was the third to last car to qualify Thursday night but still managed to break into the top-10, qualifying ninth on the aged track.

That set him up to start seventh in his Heat race. He held the position for about the length of the front stretch before diving to the bottom in the first turn, passing four cars. He worked his way to leader Sye Lynch but had to settle for second at the end.

The start of the 25-lap Feature mirrored Gravel’s performance in the Heat race. He started sixth, but again held the position for about a second. He out-powered two cars down the front stretch to take fourth by turn one and then passed Cory Eliason for third exiting turn two. Brock Zearfoss had pulled away with the lead, and Brad Sweet held second-place.

Nine laps into the Feature Gravel put Sweet within striking distance. He looked underneath Sweet going into turn one. Sweet slammed the door, almost making contact with Gravel. The next time around Gravel moved to the high side and found more speed.

With 19 laps to go, he placed his right rear against the outside cushion through turn one and then cut down to the middle of the track through turn two. The move rocketed his car off the corner like he found a secret line of grip, projecting him past Sweet for second-place.

With the fire lit, Gravel continued his strong run into turns three and four looking to end Zearfoss’ time up front. He closed to the bumper of the No. 70 car but couldn’t match Zearfoss’ traction off the corner.

The next circuit around Gravel went low in one and two, then high in three and four.

“You have to search around and find something that nobody else does,” Gravel said. “Like when Jason (Johnson) won the Nationals he kind of entered high and turned down. I was kind of able to do that a little bit, but I feel you could spin your tires quite a bit. I feel like on the bottom you kept your tires underneath you the best.”

His search for grip put him to the outside of Zearfoss down the front stretch with 18 laps to go. Zearfoss fought back the next corner. He charged into the first turn and slid up in front of Gravel.

The two raced hard the next couple of corners, battling side-by-side, even splitting the lap car of Jacob Allen through turn two and remaining side-by-side off the turn. A caution with 16 laps to go for Lynch blowing a tire ended their battle. When the race went back green Zearfoss slowed due to an ignition box issue, handing the lead to Gravel.

The race wasn’t a sure win for Gravel at that point, though. The 2018 Knoxville Nationals champion was behind him, eager to capitalize on claiming another Knoxville Raceway win and earning as many points as possible.

However, Sweet had to worry about holding off third-place Cory Eliason, first. The two California-natives battled side-by-side for several laps. Sweet prevailed in the end, finding his line and his rhythm. With five laps to go, he was back to Gravel.

The Watertown, Conn.-native’s pace had slowed so much it seemed like there was an issue with the Axalta No. 41 car. Sweet was now breathing down Gravel’s neck. However, Gravel didn’t know it. He didn’t want to know. He knew his last few laps weren’t the greatest.

“I was just trying not to crash or hit the berm too hard,” Gravel said. “The last five laps weren’t very good. Just had to get the job done.”

Gravel focused on hitting his marks and bringing new sponsor – Axalta, which Jeff Gordon helped JJR secure for the Nationals – to Victory Lane in their first race together.

“We’ve got all of the Axalta people here, Jeff (Gordon), so it can’t get any better than this,” Gravel said.

Sweet knew he was closing on Gravel and had visions of challenging him for the lead, but had his own problems in the closing laps.

“I thought we were going to have a run on him late there,” Sweet said. “We got close, but he covered his lines and a couple of lap cars messed me up. And I honestly just missed my marks a little bit. I think if I was a little more on my game I could have given him a run for his money there. But it’s all about Saturday night.”

Gravel and Sweet’s performance locked them into the Knoxville Nationals Feature on Saturday, along with 14 other drivers who locked themselves in by collecting enough points on their race night to be in the top 16 of combined points between the two Qualifying races. Aaron Reutzel will be on the poll, with Gravel to his outside.

“Just because we won tonight, and the Capitani, doesn’t mean we don’t have to improve Saturday night and get the job done,” Gravel said.

All Gravel is looking for is a shot to win the race. And he knows he has it with his JJR car being “extremely good at Knoxville.”

The World of Outlaws NOS Energy Drink Sprint Car Series on Friday, Aug. 9, will return to Knoxville Raceway for the “Hard Knox” race, giving drivers who haven’t transferred to Saturday’s Feature or Last Chance Showdown an opportunity to finish in the top four of the Hard Knox Feature and transfer to the rear of Saturday’s Feature.

If you can’t be there in person you can watch all of the action LIVE on DIRTVision.com.

Get tickets and more information.