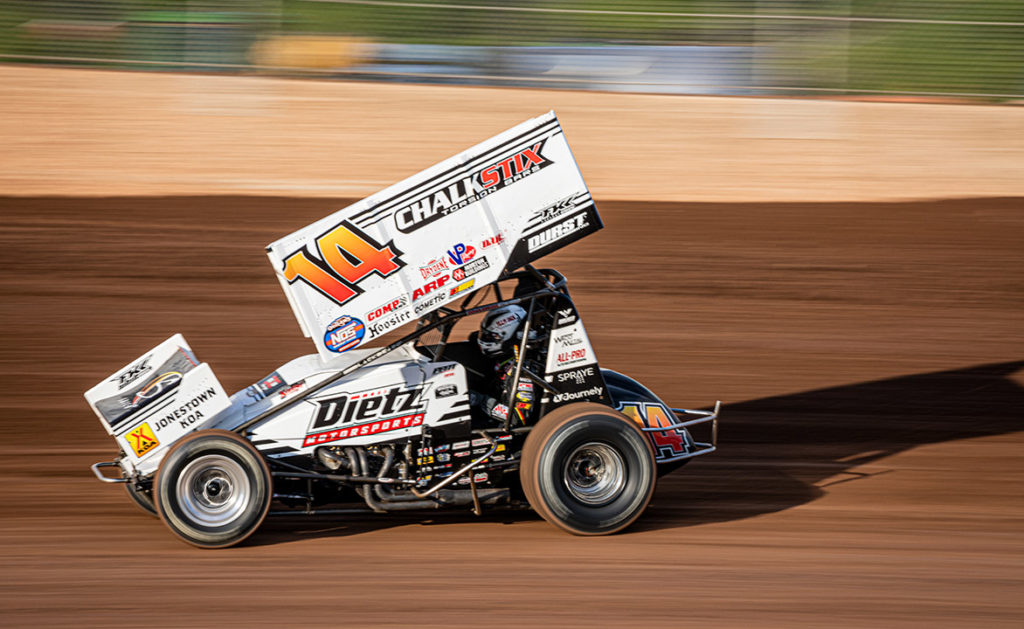 Parker Price-Miller returns to one of his favorite tracks this weekend with what he considers one of the best opportunities in his career.

The World of Outlaws NOS Energy Drink Sprint Car Series will run a doubleheader June 19-20 for the first time at Tri-State Speedway in Haubstadt, IN – the site of Price-Miller’s first and only career Series win in 2017.

The Kokomo, IN driver bounced around to five different teams after his home state win before landing with Dietz Motorsports – owned by Jason Johnson Racing crew chief Philip Dietz and his wife Brooke – this year. Price-Miller considers Dietz, the two-time Knoxville Nationals winner, to be the best crew chief in the Series and said he believes he and the team could sweep the weekend at Tri-State Speedway.

“Haubstadt is one of my favorite tracks, so to go there with a team like this, I’m really excited,” Price-Miller said. “I actually struggled there last year. Haubstadt hasn’t been the same. Like when I won there it got really clean and slick. One year it’s just greasy and heavy. So, you never know what you’re going to get. Hopefully with two nights going there we’ll get one (of the track conditions) that I like.”

He has an average finish of 11th in five starts at the quarter-mile track. However, two of those finishes were outside the top-20 due to circumstances that took him out of the race. Coincidentally, when he won in 2017, Price-Miller held off David Gravel and Jason Johnson to win.

In the first 12 races of the World of Outlaws 2020 season, Price-Miller and the Dietz Motorsports team have shown speed at times, finishing fourth in their first World of Outlaws race together. But have also struggled to find the consistency they’re looking for.

At the moment, they’re consistently about a 15th place car, Price-Miller said. They need to work on getting a touch better to find themselves in the top-10 and top-five more often. Losing two months of racing due to COVID-19 didn’t help, either.

“This year has been up and down,” he said. “We’ve been fast. We just haven’t been up to our standards I would say. We tried the things they (Dietz and JJR) did last year, and it just hasn’t really clicked for us. For me and David (Gravel) both, actually. Just have to find a new base line. It’s taken us quite a bit of time to find that.”

Their main area of focus was first on qualifying, but they’ve improved on that in the past couple of weeks. Price-Miller went fastest overall in his Qualifying Flight during the second night of the Knoxville Raceway doubleheader. Now, they’ve turned their attention to keeping the Chalk Stix Torsion Bars #14 drivable throughout the entire Feature.

Price-Miller acknowledged part of that problem probably stems from him still getting used to Dietz’s cars.

“It’s a lot of chemistry,” Price-Miller said. “It takes time. It doesn’t happen overnight. Just going to take more laps and more race for us to get more comfortable.”

With JJR and Dietz Motorsports being satellite teams – working out of the same shop in Missouri and running the same cars – Price-Miller has the added benefit of having Gravel, who won 12 races with Dietz last year, as a teammate to lean on.

“It helps out having two cars out there,” Price-Miller said. “He (Gravel) can run a Heat Race and tell me what he thinks and what he feels. He can tell me what I’m doing wrong. He’s really good. But at the end of the day we’re still racing against each other. But he’s done a lot for me and helped me out a lot. A good guy to have in my corner.”

Price-Miller has yet to run a full schedule with the World of Outlaws. The most races he’s ran in a year with the Series is 26. Dietz’s plan at the beginning of the year was to run the #14 car in about 30 to 40 World of Outlaws races. Now, with the way the Series schedule has been shaken up due to the pandemic, Price-Miller said there’s a possibility they may run the remainder of the season.

“With all of this COVID stuff, we’re racing every weekend and not racing during the week, so we get to go home every week,” said Price-Miller, who currently sits 10th in points. “That makes it kind of easier. Just kind of going with the flow and keep racing until it doesn’t really make sense anymore, I guess. Hopefully we just keep running Outlaw races. Maybe run the whole schedule, but just going week by week and hopefully keep getting stronger and faster.”

This weekend, with family and friends in attendance, Price-Miller will have the opportunity to take Dietz Motorsports to the next level and try to bring them their first World of Outlaws win at the same track he got his.

He’ll also get the chance to win on national television with Saturday night’s race being broadcast live on CBS Sports Network, starting at 9 p.m. (ET). And earlier in the day on Saturday, CBS will air The Greatest Show on Dirt, a documentary highlighting the World of Outlaws’ 2020 season, so far, at 1:30 p.m. (ET).

Saturday’s tickets to the event are sold out, but you can still purchase tickets to Friday’s race by clicking here.

If you can’t make it to the track, both nights will also be live on DIRTVision, starting at 7 p.m. (ET).