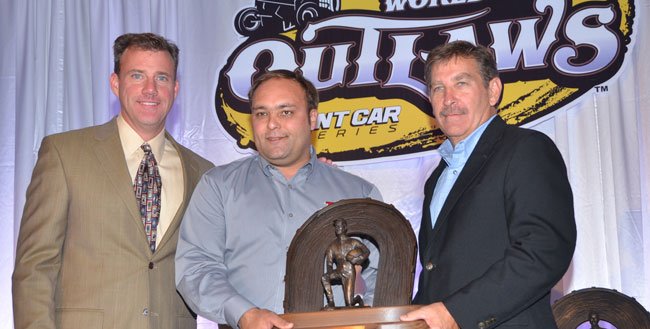 He received a check for the $150,000-to-win championship – his fifth since 2006 – at the event, which honored the 11 full-time Outlaws as well as the marketing partners for the World of Outlaws.

“The fact that we ran second a lot and third a lot, and that’s what wins championships – is what you do on the nights when you can’t win,” Schatz said. “This ranks up there as one of the hardest fought ones. We had some of the lowest lows and the highest highs.”

Craig Dollansky finished second in the standings, which was his best result since 2006. Sammy Swindell, who led the series with 13 feature victories, placed third and Joey Saldana ended fourth – his eighth top-five finish since 2002. Steve Kinser, who is a 20-time champion and the winningest driver in the series, garnered his unprecedented 31st top-five result.

The 2013 season kicks off with the 42nd annual UNOH DIRTcar Nationals Presented by Summit Racing Equipment on Feb. 15 at Volusia Speedway Park in Barberville, Fla.