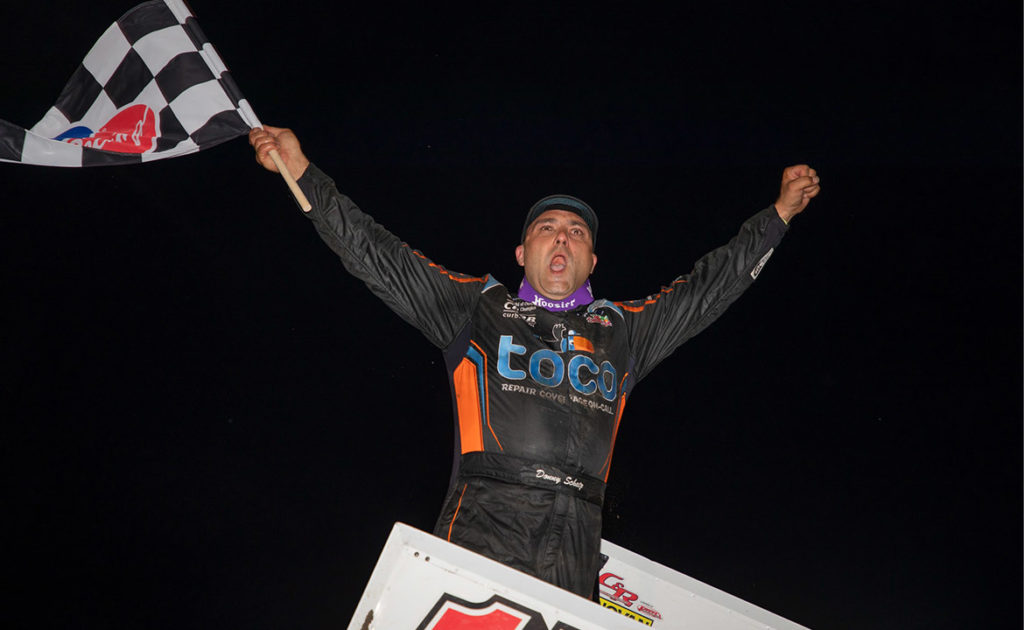 “It feels good,” said Schatz with a heavy exhale of air.

Unreal traditionally has one meaning. For the 10-time Series champion it had many.

He claimed first home state win of the year with the World of Outlaws – eighth of the season and 291st overall. He swept the night winning in his Sprint Car and NLRA Late Model. And he reclaimed the points lead over Brad Sweet – now leading the Kasey Kahne Racing driver by 24 points.

The word could also define his path to the victory.

Schatz’s second-place finish in his Drydene Heat race put him into the DIRTVision Fast Pass Dash, which didn’t go as planned. He started fifth and finished in sixth-place – last.

He and his Tony Stewart/Curb-Agajanian Racing team tried something different for the Dash, he said. It didn’t work. They tried something else for the Feature, and it did.

Once the Feature went green, polesitter David Gravel, coming off his recent Knoxville Nationals victory, shot to the lead over second-place Brad Sweet. Schatz immediately went to fifth on the first lap.

Before the leaders could make their way around turn three the red flag was thrown and the race went into an Open Red. Nick Omdahl hit the wall coming off turn four, which bounced his car inches off the ground, and with help from another car, put his front end into the fence near the flag stand.. It took 26 minutes to get his car untangled from the fence and repair the spot he hit.

Once the race went back green, Gravel again bolted to the lead. Schatz lost fifth-place to Sheldon Haudenschild and Mark Dobmeier looked underneath him in turn three to take sixth. But with a power move around the high side Schatz made a three-wide pass around Haudenschild and Dobmeier to reclaim fifth-place.

Gravel’s quick pace around the 3/10-mile track put him in lap traffic by Lap six. Behind him, Sweet and Logan Schuchart – who won at River Cities Speedway in June – battled for second. The two traded slide jobs, arguing over who would be second. Sweet lost the fight coming off turn two, hitting the cushion, bicycling, and allowing Schuchart to charge by.

Schatz also took advantage of Sweet’s fumble. Continuing to make ground on the high side, Schatz rocketed his Toco Warranty No. 15 around Daryn Pittman for fourth-place and then Sweet for third in turns three and four. Sweet didn’t let him get away, though.

On the exit of the next corner, Schatz and a lapped car almost collided, drastically slowing his pace and allowing Sweet to move back to third. While the top two in points tried to navigate lapped traffic, Haudenschild maneuvered around the slower cars like he placed them there to begin with. The Stenhouse Jr.-Marshall Racing driver raced his way by Schatz and Sweet in one turn on Lap 12.

After bicycling off the cushion on the exit of turn two a few more times, Schatz eventually made his way back by Sweet for fourth-place.

Then, the second Open Red of the night on Lap 16. Contact with another car launched Brendan Mullen’s car off turn two and onto the top of the fence outside the turn. With Mullen OK and the car secure where it was – several feet away from the track – the race resumed.

When it did, Schatz made his “unreal” move. He went from fourth-place to second on the exit of the first corner, throttling around the top groove. He continued his power lust run down the back stretch, closing in on Gravel and diving underneath him in turn three, not knowing if the move would stick.

Once his right foot eased back on the throttle the answer quickly became “yes.” The traction was there. He went side by side with Gravel through turn four and drag raced him down the front stretch.

The reigning champion had the better grip, though. He outpowered the Jason Johnson Racing car to the flag stand and took the lead on Lap 17.

“I knew I was in a little bit of trouble with that red, but they said I had a decent lead,” Gravel said. “We tried to make the car a little bit better. You give Donny Schatz and his team two Open Reds to make their car better… he’s been dominating here for a long time. Obviously, his car wasn’t great earlier, and they made it a lot better. For us, we were in a position that we shouldn’t change too much because we’re in the lead. That’s the way it goes.”

However, Schatz said he and his team didn’t make any adjustments. He found his rhythm and ran a blistering pace for the remaining 23 laps. He weaved through traffic with ease, pulled away to a six second lead and lapped up to ninth-place – including Sweet, who finished 13th.

“Unreal,” said Schatz, after claiming his ninth win in the last 11 races at the speedway. “We had a plan from the word go to be good at the end. The track kind of came around to us. Not bad for a North Dakota boy and a South Dakota boy (Schatz’s crew chief Steve Swenson). I think that was an ass whooping there.”

While Schatz dominated in Grand Forks, N.D., he has his eye on the Series’ next race on Saturday, Aug. 17, in his hometown of Fargo, N.D. at Red River Valley Speedway. Get tickets and more information.

As always, if you can’t make it to the race, you can catch all of the action LIVE on DIRTVision.com.