At A Glance: Wilson Cali Cruising 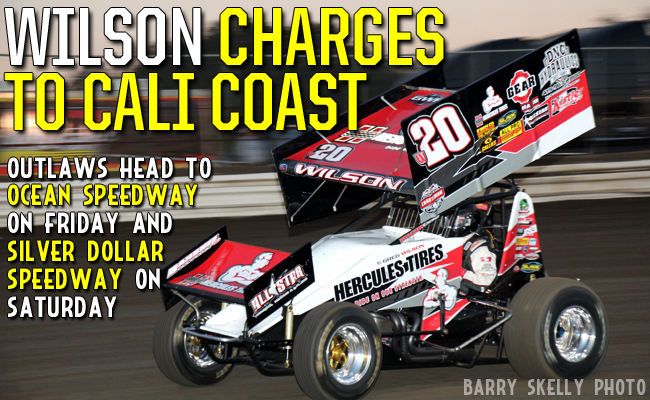 At A Glance: Greg Wilson Learns Out West, Finds Success

CONCORD, N.C. – March 30, 2016 – The World of Outlaws Craftsman® Sprint Car Series continues its western swing through the Golden State as the series gears up for racing along the coast at Ocean Speedway in Watsonville, Calif. for the Ocean Outlaw Showdown presented by Budweiser on Friday.

Leading rookie of the year contender Greg Wilson has his sights set on the 1/4-mile track located just south of the Bay Area, after scoring his first top-10 of the season at Placerville Speedway on March 23.

“We have struggled pretty badly up until Placerville,” Wilson said. “We just finally got to a shop, we met someone through Jason and Paul Sides…we were able to strip our racecar and found some things.

“We kind of got our baseline back I think, but it was pretty cool because we timed pretty good and ran well in the heat race and ran really well in the feature. Obviously as bad as we were running, a top 10 of any kind felt like a feature win.”

Following action on Friday, the World of Outlaws travel over 250 miles north for the Mini Gold Cup at Silver Dollar Speedway in Chico, Calif. on Saturday night.

A 1/4-mile track located 80 miles north of Sacramento, Wilson last raced at Silver Dollar in 2013, in which he missed the feature race.

This season, the Benton Ridge, Ohio native has experienced an up-and-down first full-time season so far. Wilson’s season can be summed up in recent weeks as he missed the feature at Stockton Dirt Track on March 19, then rebounded with a sixth place finish at Placerville just four days later.

“It’s been a huge learning curve,” Wilson said. “We ran into some challenges early in the season that are going to help us later in the season because we changed our approach a little bit and seen some things we need to concentrate on and some things that maybe aren’t as important.

“The neat part about it is we are racing with some really good people and we have met some great fans. With the Outlaws and the other race teams, they reached out and have helped us along a little bit. This is all knew territory, you don’t know what you’re going to get. I have travelled a lot through my career but nothing at this level.”

The driver of the Hercules Tires/Ohio Logistics No. W20 has competed in years past but never as a series driver running the full season.

Wilson earned his first World of Outlaws victory last September at the 4-Crown Nationals at Eldora Speedway, to go along with his five top-five’s and 16 top-10’s since 2012.

Wilson, an All Star Circuit of Champions title winner in 2006 and 2007, started the season off strong at the 45th Annual DIRTcar Nationals at Volusia Speedway Park, making the feature all three nights with a best finish of 11th on the second night.

As the series travelled west, Wilson started to encounter the growing pains that come with racing the full schedule. Over the next seven races, Wilson raced his way into three features and missed four, with his best finish being a 15th at Cotton Bowl Speedway in Paige, Texas on Feb. 26.

With the California portion of the western swing nearing its conclusion, the 2016 season is still in the beginning phase. With seven months remaining, Wilson envisions a lot of improving and growing still left to accomplish for himself and his team.

“We just need to continue to nail down some top 10s and get some consistency,” Wilson said. “This California swing, we knew, was going to be the toughest part of the schedule for us – or I hope that’s the case.

“Our goals are if we can creep our way back up into the top 10 in points and hopefully by the middle of the season we can compete for wins. At the beginning of the year we hoped to be top 10 in points, around seventh to tenth would be reasonable goal, and three to five feature wins. Obviously, we want to make shows and be competitive”

Tickets remain for both the Ocean Outlaw Showdown and Mini Gold Cup and are available by calling 844-DIRT-TIX (347-8849), or by visiting WorldofOutlaws.com/Tickets.com.

ABOUT THE TRACKS
OCEAN SPEEDWAY is a 1/4 mile, slightly-banked dirt oval. The track record of 10.949 seconds was established by Mark Kinser on Sept. 1, 2000

SILVER DOLLAR SPEEDWAY is a high-banked, quarter-mile oval. The track record of 10.918 seconds was established by Daryn Pittman on March 22, 2013.

LIVE ONLINE UPDATES: Listen live for free to the Ocean Outlaw Showdown presented by Budweiser at Ocean Speedway on Friday, April 1 and the Mini Gold Cup at Silver Dollar Speedway on Saturday, April 2 on the DIRTVision Radio Network at DIRTVision.com.

COMING UP NEXT: The World of Outlaws Craftsman® Sprint Car Series returns to action at Calistoga (Calif.) Speedway on Saturday and Sunday, April 8 and 9 for the Wine Country Outlaw Showdown.