At A Glance: Outlaws Return to Its Roots 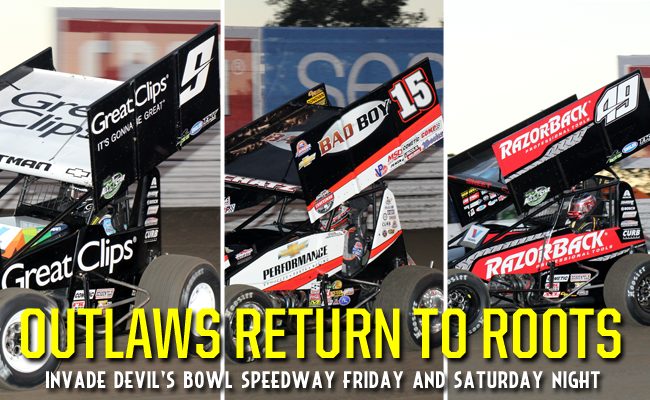 At A Glance: Outlaws Return to Its Roots

CONCORD, N.C. – April 21, 2016 – The World of Outlaws Craftsman® Sprint Car Series will cross out of the Pacific time zone for the first time since early March, as the series treks east to historical Devil’s Bowl Speedway in Mesquite, Texas for the Texas Outlaw Nationals this weekend.

Devil’s Bowl has a special place in the history of the World of Outlaws. The 1/2-mile track, located just 20 miles from Dallas, Texas, was the site of the first ever World of Outlaws race on March 18, 1978, after former racer, Ted Johnson, organized a group of sprint car drivers to form a national touring series.

The Outlaws again invade its birthplace on Friday, April 22 and Saturday, April 23 for a two-night showdown with racing legend and Indianapolis 500 winner Johnny Rutherford on hand as the Grand Marshal on Saturday. Star of the hit Discovery Channel show “Moonshiners”, Tyler Wood, will also be on hand throughout the weekend.

In 2015, Donny Schatz captured the victory on night two. Schatz, who is tied with points-leader Brad Sweet with most wins so far this season at five apiece, also scored a victory at Devil’s Bowl in 2014 along with Sweet’s teammate Daryn Pittman.

Schatz, Pittman and Sweet each value their annual trip to the historic track, and look forward to this weekend’s double-header:

“It’s cool to go back to the place where it all started. Lanny [Edwards, the track owner] has been really good to me in my career, and he’s personally helped me out when I had my own team and sponsored me with Devil’s Bowl and Chili Bowl, when he knew we were just trying to get our name out here. I also like going to Devil’s Bowl because I am from pretty close to there – Tulsa – and grew up racing there a lot, and won the first time back in 2013, so that was pretty special too.”

After capturing your first win of the season earlier this year in the state of Texas, then winning back-to-back events within the last week, what will it take to carry the momentum into this weekend?

“I felt like we have had momentum all year. We have taken ourselves out of some races and had some finishes that were a little uncharacteristic of our team. But we have been fast and consistent, we just have to keep putting it together. We haven’t been struggling at all for speed or any of that – we have been fast everywhere we go.”

“It’s an incredible place. We have the luxury of going to a lot of great dirt tracks across the country, but pulling into the gate, with all the history and heritage that’s happened there back in the day, and even today, with Lanny Edwards still operating Devil’s Bowl. Things stick out in your mind about Lanny – he’s a wild operator some days. But the history and heritage is something that’s heartfelt and hard to explain to anybody.”

After winning at Devil’s bowl in both 2014 and 2015, what does it take to be consistently at the front there?

“ I don’t know if you can say we have been consistent. We had a long absence from Devil’s Bowl, so I am excited to be going back there again, it’s a place that has a lot of history: the first World of Outlaws race and hometown of Ted Johnson. Those are the sort of things that stick out in your mind when you go there. Getting the win was great, I’ve missed racing there, so you when you go back to a place your miss, it seems like you always run well there, so we’re looking forward to going back.”

“For me, I am a little younger so I wasn’t around when the Outlaws started. It’s obviously a very prestigious track being the place the Outlaws started. I always heard about some of the shows that Steve [Kinser], Sammy [Swindell], Doug Wolfgang and all those older guys had, so the fact that we get to go back there and keep the series going there after all these years is pretty awesome. It’s a historical racetrack so anytime you can win there and put your name on that list of winners is an honor.”

How excited are you to return to the Lone Star State after capturing a victory earlier this season at Cotton Bowl Speedway?

“We’ve just been really good this year, so right now we’re excited to go to all of the racetracks. Devil’s Bowl hasn’t been one of my best tracks, I think my best finish there in a couple of years is fifth or sixth, but I think with this year our car has been a little faster, so we’re excited to get back into Texas. After Texas, that leads us into the midpoint of the season, the prime months that can make or break you for sure.”

Tickets remain for the both nights of the Texas Outlaw Nationals at Devil’s Bowl Speedway in Mesquite, Texas on Friday, April 22 and Saturday, April 23 and are available by calling 844-DIRT-TIX (347-8849), or by visiting WorldofOutlaws.com/Tickets.

LIVE ONLINE UPDATES: Watch the Texas Outlaw Shootout live at Devil’s Bowl Speedway on both Friday, April 22 and Saturday, April 23 at DIRTVision.com for $44.99 for both nights.

COMING UP NEXT: The World of Outlaws Craftsman® Sprint Car Series heads to I-30 Speedway in Little Rock, Ark. on Tuesday April 26.