At A Glance: Historic Eldora Weekend 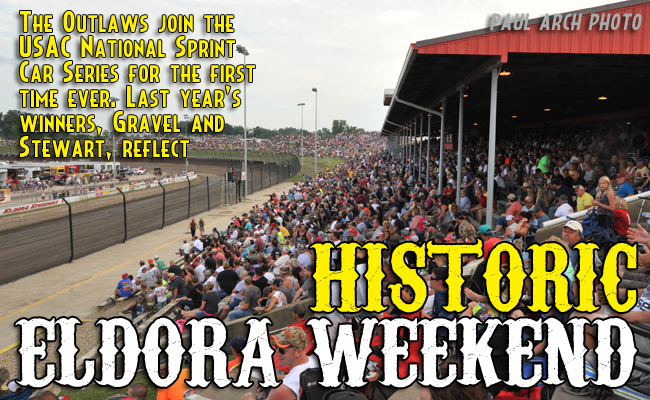 At A Glance: As Eldora Approaches, What a Difference a Year Makes

CONCORD, N.C. – May 5, 2015 – History will be made at Eldora Speedway this Friday and Saturday as the World of Outlaws Sprint Car Series and USAC National Sprint Car Series join together for the first time ever in a double-header ‘Mother of All Sprint Car Weekends.’

Two World of Outlaws drivers who made a little of their own history last season at the spring Eldora races, David Gravel and Shane Stewart, return to the track after a season of change for both.

When the Outlaws visited the high-banked, half-mile oval in the spring last year, Stewart, the 2005 Kevin Gobrecht Rookie of the Year, returned with a new team, Larson Marks Racing. The upstart organization, in just their first Outlaws start, took home the win. That opening shot propelled them to two full points wins and a qualifier night win at the Knoxville Nationals during the 2014 season.

With 2015 underway, Stewart already has three wins and currently sits second in the championship points standings behind reigning champion Donny Schatz. Stewart said he would rate his time highly through the first part of the season.

“I’m very proud of my guys,” Stewart said. “We’re still a new team, we’re still learning. We’ve still got a lot of racing to go. To be where we are at, with what we learned last year, doing what we did, I think it’s starting to pay off. It’s a long season. I’m excited about where we’re at – I think we’re in a good position.”

As far as his team settling into the grueling Outlaws schedule, Stewart said they have been great.

“My guys are ready,” Stewart said. “I’ve just got to keep myself mentally focused because I haven’t done it in a long time. It’s not just showing up to the race track. It’s what you do after hours trying to take good care of yourself and get good rest. That part of it is what you have really got to watch. You have to be able to do that to keep your sharpness come June, July and August. We’re having a good time. It obviously helps when you’re racing good and finishing up front – that helps keep the team moral up. So far so good and hopefully we can keep that roll going.”

For Gravel, last year at Eldora was his debut with Roth Motorsports. Like Stewart, he closed out the weekend with a big win for his team.

“Definitely huge,” Gravel said. “Second night in a new car was awesome. I really like Eldora. I’ve had some success there and last year was a good year. Started on the pole at King’s Royal, finished on the podium. That was really big. Every time we’ve been to Eldora, we’ve run well.”

In recent weeks, Gravel and Roth parted ways. He immediately picked up a new ride with Destiny Motorsports which saw its own driver change. Gravel said he has learned a lot in the last year.

“I’ve been through a lot of different cars and have been a lot of different places,” Gravel said. “I think now I’ve been at every Outlaw track that the circuit has, so that’s a plus. And you just never get down on yourself. It’s a long season and I know I can drive. I know no matter what car I get in, if we work together, I’ll be fast. Just move on from night-to-night, don’t look back, look forward. Work with your team and you’ll get it figured out.”

Tickets for the ‘Mother of All Sprint Car Weekends’ at Eldora Speedway start at just $25. Reserved seats are $4 more. Children 7 to 12 are $6 while children under 6 are free. For more information and to buy tickets, visit http://eldoraspeedway.ticketforce.com/.

ABOUT THE TRACK
ELDORA SPEEDWAY is a high-banked, half-mile oval. The track record of 12.707 seconds was established by Craig Dollansky on April 13, 2002.For more event information, visit http://woosprint.com/eldora-speedway.

LISTEN LIVE: Listen live for FREE on http://www.DIRTVision.com as the World of Outlaws Sprint Car Series takes on the historic Eldora Speedway on May 8 and 9.